"Wu-Tang Clan: Of Mics and Men" enters the inner chambers of a hip hop legend 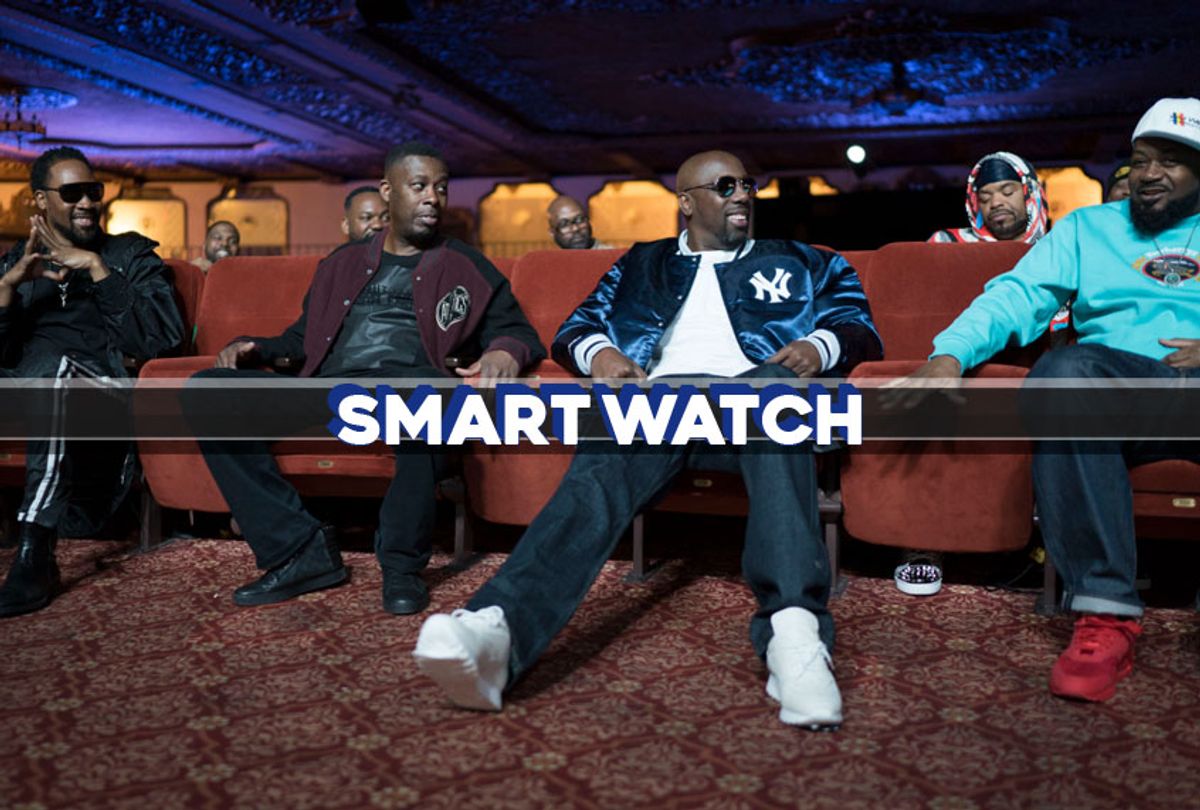 The legend of the Wu-Tang Clan was awe-inspiring long before documentarian Sacha Jenkins grabbed hold of it. Here were ten fierce young rappers who took on the guise of a superhero team, couching their lyrical prowess and presentation in a martial arts mystique. Their humble beginnings became myth; the Staten Island projects were transformed, through their lyrical creativity, into the Slums of Shaolin.

Each member of the Wu-Tang Clan — RZA, GZA, Raekwon, Method Man, Ghostface Killah, Ol’ Dirty Bastard, Inspectah Deck, Mastah Killah, U-God, and occasionally Cappadonna — forged his own identity and style, mixing and matching with the complimentary energies of his brethren. Individual members went on to become stars in music, film and television, but for a time they hung together.

Without formally intending to do so, Wu-Tang pushed back on the industry business model by forging a collective bargaining unit dictating that if one member scored a success, everyone benefitted financially. Succeed they did, on a worldwide level unlike just about anything hip hop and the music industry at large had seen before. That is, until their egos got the better of them.

And here we are, marking the  25th anniversary of the Wu-Tang Clan’s debut album with Showtime’s four-part series “Wu-Tang Clan: Of Mics and Men,” airing Fridays at 9 p.m. on Showtime — part one premiered this week, and all four episodes are now available on VOD to Showtime subscribers. In creating this series Jenkins stretches his arms wide and effectively embraces the sprawl of the group’s legend. This no easy feat.

A former musical journalist, Jenkins’ reverence for the Wu-Tang Clan’s history shows through in every frame, particularly in shots showing them as they are today which, appropriate for a group born out of an affection for vintage kung fu action films, are set in a classic movie theater.

Jenkins lights them in a way that makes each stand out against the theater's voluptuous darkness as they debate details of their past and reminisce about their glory days as footage from their life plays. Some of the most powerful shots show them sitting silently, reacting to the archival movies playing onscreen.

Topmost among Wu-Tang’s dominant characteristics, aside from its combat-ready lyrical flow — the RZA refers to the group’s artistry as a sword-style — is its infectious wildness. Live performances have a circular, nearly contentious flow to them, displaying a disciplined looseness.

Offstage, as the documentary shows, they’ve dueled with the same intensity with which they’ve supported each other. This informs the progression and editing of “Wu-Tang Clan: Of Mics and Men” particularly in its first two episodes, a soul-stirring appreciation of the group’s triumphant rise in the early 1990s and its pop culture dominance in the later part of the decade.

Much of the focus in the series’ opening hour focuses on the group’s origin story which, like the rest of its episodes, is narrated by Wu-Tang’s de facto leader RZA. And for fans of its 1993 debut album “Enter the Wu-Tang (36 Chambers)” and its 1997 follow-up “Wu-Tang Forever,” these chapters feel glorious.

But this is not the place to find out about the creative juices that went into the successful and influential solo releases that came out of the group, and that becomes apparent once the series crosses the midway threshold.

Following the classic structure of the pop music documentary, Jenkins straps us in and gently descends into the weave of narratives explaining the collective’s tumble into the mists of, if not totally forgetting, the land of wondering what happened, to the contentiousness and absurdity surrounding the production of the sole copy of “Once Upon a Time in Shaolin,” auctioned off in 2015 for $2 million to ambulant tumor Martin Shkreli, the reviled pharma bro currently serving out a seven-year sentence for committing securities fraud.

The struggles and death of Ol’ Dirty Bastard get their appropriate due in the third episodes, as do the lesser-known stories surrounding the group, particularly that of RZA’s brother Divine, the money-maker behind the scenes whose success left bitterness in its wake.

“In serving each other, we became free from poverty,” he observes. “Our loyalty to one another freed our mothers from welfare. To feed our kids to this day. Our children are in college. . . . Could we have made all of these dramatic changes in our live if we hadn’t come together for one common cause? So how did we achieve such measures and allow it to be destroyed, for what? A verbal disagreement.”

The fallout between the group and Divine remains significant enough that while the main members receive individual interviews on throne, Divine tells his side of the story, as he puts it with a sharpness, while “chillin’ on my yacht.”

Jenkins features luminaries and fans such as Ta-Nehisi Coates and Jim Jarmusch to contextualize the group’s significance to different corners of the world. It’s telling that while Coates marvels at what the Wu-Tang Clan signifies about the black urban experience, Seth Rogen’s observation says plenty about its reach into white audiences who have no clue what it’s like to grow up in the projects.

For a time the Wu-Tang bat-signal was everywhere, but soon became distanced from its meaning.  The RZA composes soundtracks and starred in his own martial arts films (starting with “The Man with the Iron Fists”); Method Man has co-starred in a sitcom, appears in films and television series and current co-hosts TBS’s “Drop the Mic,”  a celebrity rap-battle competition. But only a few of the others have fared as well, and the discontent at that imbalance rears its head throughout the series’ later hours.

So too does the abiding warmth members of the group still have for each other, and that alone is enough to elevate the series into something more than a mere non-fictional bio.

With “Wu-Tang Clan: Of Mics and Men” Jenkins honors the mythological aura the group constructed around itself and each individual member but refrains from being utterly seduced by it, which goes a long way toward securing its place as a classic.

“The Bachelorette,” premieres Monday at 8 p.m., ABC (and on Twitter)

As surely as the seasons change, our scripted TV series must fall fallow for a time, closing up shop and stepping aside for unscripted to take center stage. Arguably no other series personifies summer like “The Bachelorette,” ABC’s annual tribute to unrealistic expectations about love and ridiculous male peacocking.

This historic 15th season (that’s sarcasm, folks) stars Miss Alabama USA Hannah Brown, who despite knowing what this show is about has decided to take her chances with it as part of what ABC describes as “her pursuit of the fierce love she so deserves.” Who knows? With 30 guys to choose from, at the very least she’ll get a few make-out sessions out of it, which is better odds than a visit to Chili’s.

If nothing else “The Bachelorette” provides reliable comedy and feeds social media like few other series, so if you don’t actually want to watch the thing, at least treat yourself to a Twitter party once a week. That’s the finest way to watch it anyway.

Just a friendly reminder: This week brings us the end of “The Big Bang Theory.” And don’t worry, we’re going to give that series its proper due. However, do not underestimate the value of watching a show like this — a one-time favorite of a past Salon TV critic — to make you appreciate your level of intelligence.

Barring that, since the competition involves single people doing their darndest  to stay in “paradise” by coupling up, and part of the allure is attempting to influence what they do using social media, this also offers the opportunity to feed that god complex hiding within. Bwahahahahahaha! . . . Love isn’t real.

At Salon we’ve decided that Euron is both a joy to behold and an utter ass, so that’ll make whatever happens to him a delight. Anyway, there are two more episodes left and Hot Pie might still take this!