Are Democrats focusing on the wrong race headed into 2020?

The executive branch isn’t the only thing in play in 2020, as a new report stresses the Senate is also up for grabs 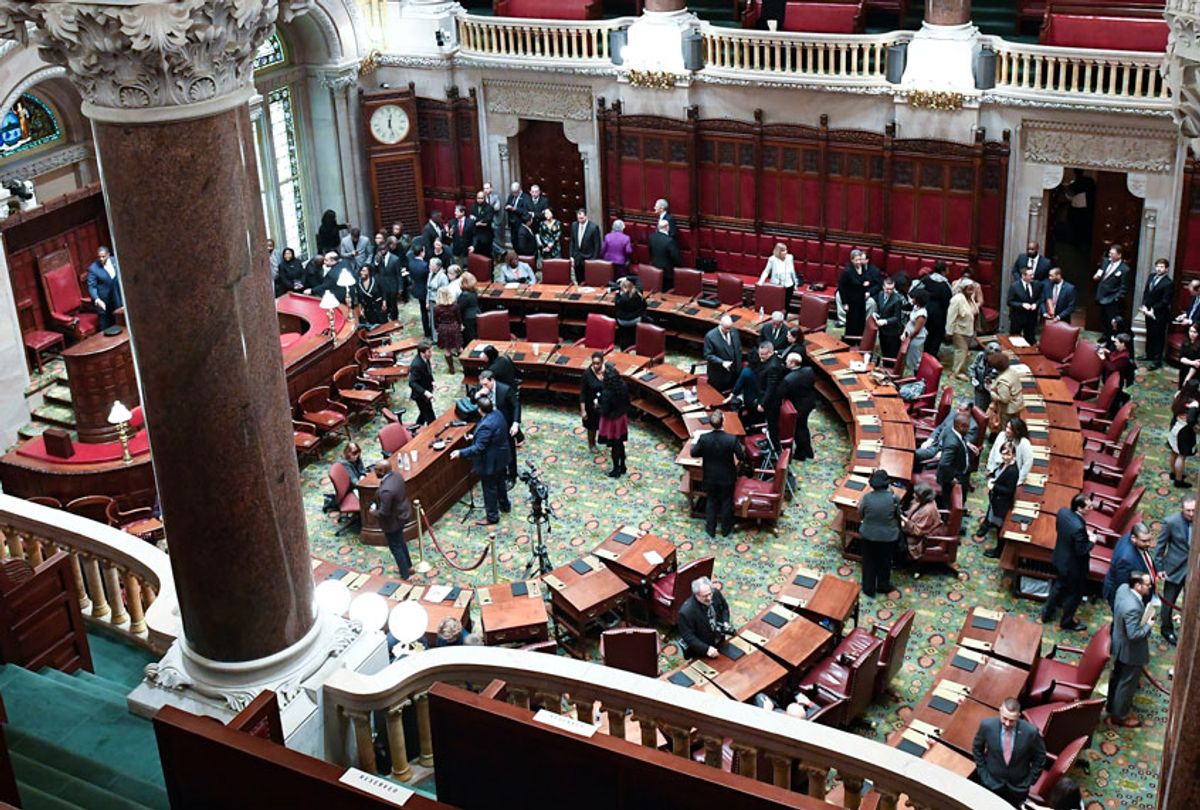 Senate members meet during opening day of the 2019 legislative session in the Senate Chamber at the Capitol on Wednesday, Jan. 9, 2019, in Albany, N.Y. (AP/Hans Pennink)
--

Defeating President Donald Trump is obviously the top priority of the Democratic National Committee (DNC) for 2020, and many Democrats are debating which presidential candidate would stand the best chance of accomplishing that. But the executive branch isn’t the only thing in play in the U.S. in 2020, and a May 13 Wall Street Journal report by Richard Rubin and Kristina Peterson stresses that the United States Senate is also up for grabs.

In a best-case 2020 scenario for Democrats, they would not only maintain a majority in the House of Representatives and make Trump a one-term president, they would also retake the Senate. But if Republicans keep the Senate and Kentucky Republican Mitch McConnell stays on as Senate majority leader, Democrats would still have a disadvantage — even if Trump is voted out of office and Democrats keep the House.

However, Rubin and Peterson report, retaking the Senate wouldn’t necessarily be a legislative panacea for the progressive wing of the Democratic Party, as some centrist Democratic senators — including Joe Manchin of West Virginia and Kyrsten Sinema of Arizona — would still be voting with Republicans some of the time.

“In a Democratic president’s worst-case scenario, Republicans retain control of the Senate in 2020 and Majority Leader Mitch McConnell (R.-KY) plays the grim-reaper role he relishes, creating a graveyard for Democratic legislation,” Rubin and Peterson explain. “But even if Democrats regain the Senate, the fate of environmental, health and tax policy will be constrained by a handful of more moderate Democrats. Even if Democrats change Senate rules to let any legislation pass with a bare majority, they would still likely need to keep both wings of the party satisfied to muster at least 50 votes for their top priorities.”

Democrats will need a net gain of three seats in order to retake the Senate in 2020. Iowa, Georgia, Maine, Colorado and North Carolina are among the states where Senate seats will be up for grabs. Republican Sen. Martha McSally is up for reelection in Arizona, and Democratic Sen. Doug Jones is seeking reelection in Alabama.

Rubin and Peterson cite Manchin and Sinema as two Democratic centrists who would have the power to make or break some key votes in 2021 and beyond even with a Democratic Senate majority. For example, they note, Manchin “voted against Mr. Trump’s tax law, wants improvements to the Affordable Care Act and wants to address climate change. But he hasn’t sponsored plans for a fully government-run health-care system.”

Rubin and Peterson point to Jones and Pennsylvania Sen. Bob Casey, Jr. (who won a third term in 2019) as two centrist Democratic senators who would be unlikely to vote for a Medicare-for-all bill, although they are against overturning the Affordable Care Act.

Jones will be fighting an uphill battle for reelection in 2020, as Alabama is a deep red state.

Rubin and Peterson conclude their Journal piece with a quote from Hawaii Sen. Brian Schatz, who stresses that Democrats shouldn’t count any chickens before they’re hatched.

“You don’t start vote counting until you know how many members you have and what their composition is and what the political situation is,” Schatz told the Journal. “It would be great if you could count votes for 2021 and start your whip operation in 2019, but that is a fool’s errand.”