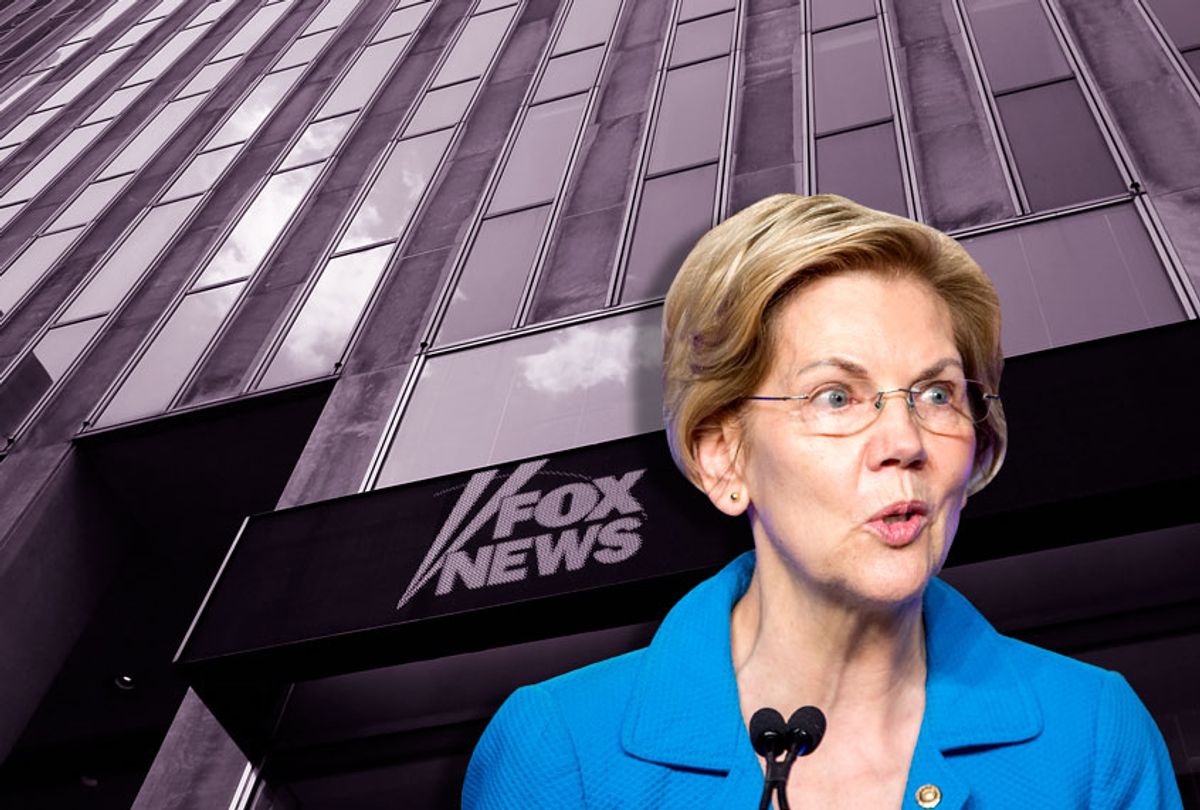 Sen. Elizabeth Warren, D-Mass., has turned down an invitation to appear at a Fox News town hall on the grounds that the network is a "hate-for-profit racket."

"Fox News is a hate-for-profit racket that gives a megaphone to racists and conspiracists — it’s designed to turn us against each other, risking life and death consequences, to provide cover for the corruption that’s rotting our government and hollowing out our middle-class," Warren wrote in an email to supporters. "Hate-for-profit works only if there’s profit, so Fox News balances a mix of bigotry, racism and outright lies with enough legit journalism to make the claim to advertisers that it’s a reputable news outlet."

She added that "Fox News is struggling as more and more advertisers are pulling out of its hate-filled space. A Democratic town hall gives the Fox News sales team a way to tell potential sponsors it’s safe to buy ads on Fox — no harm to their brand or reputation (spoiler: it’s not)."

Warren's position echoes the one taken by Tom Perez in March, when the chairman of the Democratic National Committee declined to allow Fox News the opportunity to host a Democratic presidential primary debate during the 2020 election cycle.

"Number One: We wanted to maximize the number of people who see our candidates, because I think what we are fighting for commands the respect and support of the majority of the American people. Fighting for health care, fighting for all of those really important issues that every American wants to make sure is part of their live. And so I reached out to all of the networks to make sure we could maximize eyeballs, including Fox News," Perez told CNN's Chris Cuomo at the time.

He continued, "Our second goal, though, is to make sure that every debate that takes place — that I have 100 percent assurance that everybody is treated fairly. And I have respect for a number of folks on the news side over at Fox News. I was just on Chris Wallace a couple of weeks ago. If invited, I'll go back again. He's very respected, and I have nothing but respect for him. At the same time, though, Chris Wallace isn't my concern. You see that, at the highest levels of Fox News, they have infiltrated the news side."

The Fox News town hall with Bernie Sanders last month drew more than 2.55 million viewers, according to The Hill. One particularly memorable moment from the forum occurred when anchor Bret Baier asked audience members if they would be willing to transfer from private insurance to a government-run system. A majority raised their hands.

"Fair question. I know it’s what the right wing throws out, so let me answer it, all right?" Sanders replied. "Millions of people every single year lose their health insurance, you know why? They get fired, or they quit and they go to another employer. I was a mayor for eight years, and you know what I did? What probably every mayor in America does is you look around for the best insurance program, the most cost-effective insurance. You change insurance. Every year, millions of workers wake up in the morning, and their employer has changed the insurance that they have. Maybe they liked the doctors. Some people are nodding their heads. OK. So this is not new – every year. Now what we’re talking about actually is stability— that when you have a ‘Medicare for All,’ it is there now and will be there in the future."