Republicans take Tlaib's comments wildly out of context, Fox explodes — and for once Democrats are ignoring them 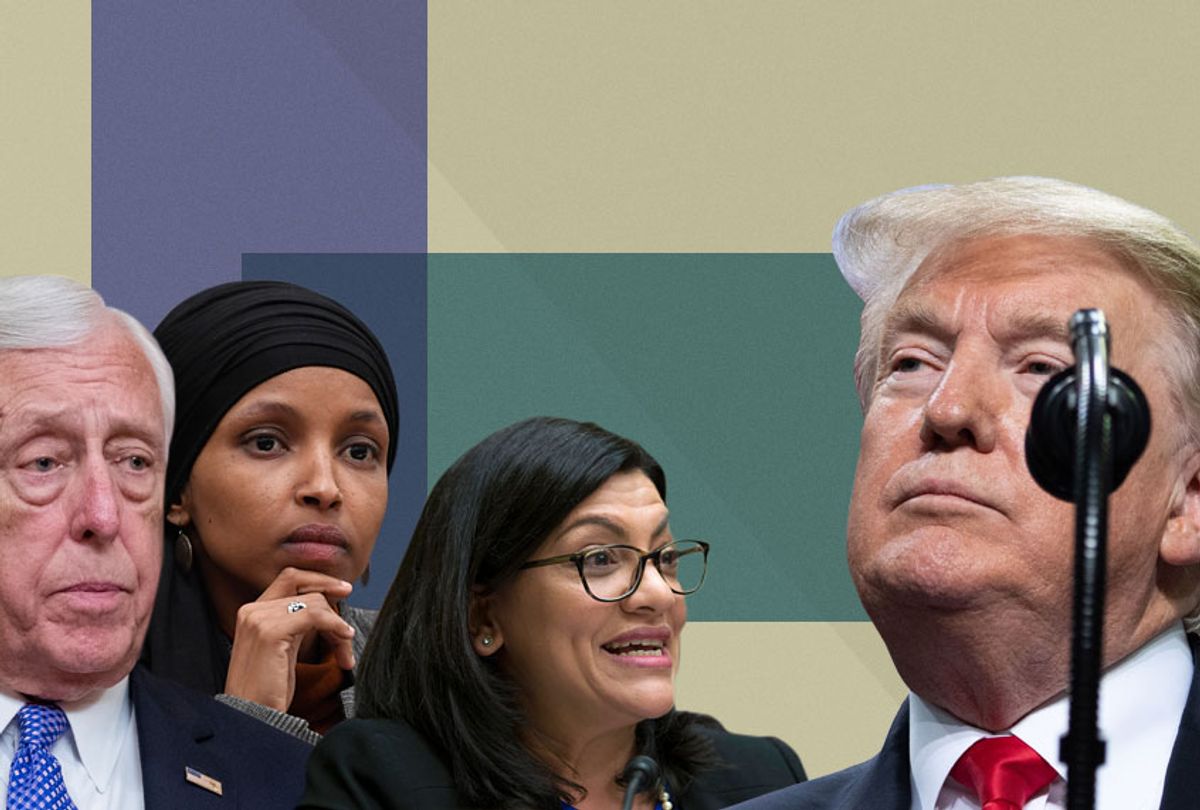 On the same day that President Trump hosted one of the most prominent nationalists in Europe at the White House, Republicans spent the day orchestrating a clearly coordinated smear job against Rep. Rashida Tlaib, D-Mich., the first Palestinian-American in Congress. Republicans are baselessly pushing the idea that Tlaib thinks the Holocaust was a good thing.

Of course, the freshman congresswoman has said no such thing. Republicans are disingenuously pushing a misleading and incorrect interpretation of a perhaps questionable quote by Tlaib — but hardly an anti-Semitic one — to run a familiar GOP play meant to silence a prominent Muslim voice. Thankfully, this time it looks like Democrats are not falling for Republicans’ bad faith attacks.

Republicans created the latest controversy after Tlaib, appearing on a recent episode of Yahoo's Skullduggery podcast, noted the recent observance of Holocaust Remembrance Day when she was asked about her support for a one-state solution to the Israeli-Palestinian conflict.

“I'm coming from a place of love, for equality and justice, I truly am," Tlaib said in defense of her position.

“There’s, you know, there’s a kind of a calming feeling, I always tell folks, when I think of the Holocaust and the tragedy of the Holocaust, and the fact that it was my ancestors, Palestinians, who lost their land and some lost their lives, their livelihood, their human dignity, their existence, in many ways, had been wiped out. All of it was in the name of trying to create a safe haven for Jews, post the Holocaust, post the tragedy and the horrific persecution of Jews across the world at that time,” she said.

"I want a safe haven for Jews," she added. "Who doesn't want to be safe? I am humbled by the fact that it was my ancestors that had to suffer for that to happen, but I will not turn my back and allow others to hijack it and say that it's some extremist approach because they're coming from a place of ... whatever it is ... of division, inequality."

Fox News frantically covered Tlaib’s comments nearly every hour on Monday. On “The Five,” which aired just as the Dow Jones closed for the day more than 600 points down, the co-hosts opened with a segment on the “far-left congresswoman’s controversial Holocaust remark.” On FoxNews.com, a Sunday op-ed focused on the "kind of  a calming feeling" fragment.

Indeed, over the past 48 hours the Fox News front page has been nearly completely focused on Tlaib.

The National Review Online was honest enough to admit that the “the GOP response was arguably somewhat overblown” and “it’s not fair to accuse her of celebrating the Holocaust.” But the conservative outlet was wrong to claim “no one is calling for Tlaib and Omar to be silenced or claiming they shouldn’t exercise their right to free speech” to blame the two Muslim congresswomen of “provok[ing] GOP outrage with [their] own anti-Semitic rhetoric.”

Take for instance former Rep, Jason Chaffetz, R-Utah, who on Fox News’ "America's Newsroom"  called Tlaib's remarks "anti-Semitic and anti-Jew" and framed them in a completely invented context, saying, "Millions of Jews were slaughtered and were killed and that gives her comfort?"

"The good people of Michigan can send whoever they want to Congress, but once she gets there Nancy Pelosi and Steny Hoyer have a duty and obligation to make a decision on who serves on committees," Chaffetz demanded.

House Minority Whip Steve Scalise, R-La., said there was "no justification for the twisted and disgusting comments made by Rashida Tlaib just days after the annual day of Holocaust remembrance," adding there was "nothing 'calming'" about the World War II-era genocide which killed at least 6 million Jews.”

Rep. Liz Cheney, R-Wyo., the third-ranking GOP member of the House, issued a statement describing Tlaib’s remarks as “sickening” and called on Democrats to “take action” against Tlaib for her “vile anti-Semitism.”

“All of us, regardless of party, must stand as Americans against the evil of anti-Semitism. If the Democratic leadership continues to stand by in silence, they are enabling the spread of evil,” Cheney said in a statement.

House Minority Leader Kevin McCarthy,  who sent out a tweet before last year’s midterm elections that attacked Holocaust survivor George Soros for trying to "buy" the election, slammed House Democrats for not reigning in the growing anti-Semitism within their caucus.

“The latest comments by Rep. Tlaib are ugly and disturbing. But sadly, they represent a consistent position of anti-Semitism and anti-Israel. Worse, the Democrat leadership continues to tolerate this hate-filled and anti-Semitic rhetoric,” McCarthy told The Daily Caller News Foundation. “Allowing this destructive language to continue unchecked goes directly against American ideals. It is time Democrat leaders finally take a stand in denouncing these vile statements.”

Rep. Lee Zeldin of New York, a Jewish Republican who has been unrelenting in his critiques of Rep. Ilhan Omar on Twitter, said Tlaib’s comments represent her “heart filled with darkness.”

The chairperson of the national Republican Party accused Tlaib of hate speech and the National Republican Congressional Committee (NRCC), the official campaign committee for Republicans in Congress, piled on Tlaib in a tweet. The NRCC ran an ad before last year’s midterm elections attacking George Soros days after a Trump-supporting serial mail bomber had sent an explosive device to Soros' home.

Naturally, Trump joined Republicans on Monday to claim that Tlaib "obviously has tremendous hatred of Israel and the Jewish people."

The president’s tweet came hours before he hosted Hungarian President Viktor Orbán at the White House. Orbán has been accused of anti-Semitism for comments like, “migration is not the goal but the instrument of the Soros plan ... to weaken the nations and provide the final blow to Christian culture.”

To be clear about what Tlaib actually said, she recognized that European Jews were persecuted during the Holocaust and that Israel was created to give them a safe haven. These are factual statements, not her characterization nor controversial. She said that when she thinks of modern-day Palestinian persecution, which presumably makes her angry, she is calmed by the thought that it resulted from an effort to provide a safe haven for persecuted Jews. The thought of that "safe haven" is calming for Tlaib, not the Holocaust.

Do Tlaib's remarks grossly oversimplify the exceptionally complicated history of what happened in Israel, Palestine and Jordan from the early 1900s through the 1950s? No doubt. But it would be ridiculous to pretend that many Palestinians weren't harmed by the creation of the State of Israel.

Trump and company created the controversy with the well-tested understanding that people will read his tweet and accept it as the full story without reading what Tlaib actually said. But unlike with past moments of inflated outrage over remarks made by both Tlaib and her fellow freshman House colleague, Ilhan Omar, no Democratic lawmakers have been cowed into criticizing Tlaib for her remarks this time. Some are even defending her.

Nancy Pelosi is smart enough not to get caught up in every manufactured distraction. But this was a disgusting smear meant to silence a Palestinian-American voice and Democrats are finally saying so.

“President Trump & House GOP should apologize to Rep. Tlaib & the American people for their gross misrepresentations,” Pelosi tweeted on Monday.  Democrats have flipped Republicans’ bad faith on its head.

House Majority Leader Steny Hoyer, D-Md., said Republicans “must stop, and they owe her an apology.”

“If you read Rep. Tlaib’s comments,” Hoyer explained to The Hill, “it is clear that President Trump and Congressional Republicans are taking them out of context.”

This is clearly better than joining in the chorus of hypocrisy, but  something much stronger is demanded of the Democratic leadership.

Unlike Hoyer, Tlaib and her staff were quick to call out specific Republicans for hypocrisy. "Once again, Republican leaders and right-wing extremists are spreading outright lies to incite hate," Tlaib spokesman Denzel McCampbell wrote in a statement Sunday.

Liz Cheney, he said, "should be ashamed of herself for using the tragedy of the Holocaust in a transparent attempt to score political points," McCampbell said. "Her behavior cheapens our public discourse and is an insult to the Jewish community and the millions of Americans who stand opposed to the hatred being spread by Donald Trump's Republican Party.”

Such a direct callout is not meant to elevate Cheney’s malicious campaign against Tlaib, but to highlight her silence on Trump’s consistently anti-Semitic statements. Calling out Cheney for her failure to call out Trump's anti-Semitism forces the media to focus on Trump and his comments.

This isn't both-sides-ism, it is calling out false equivalency.

Tlaib accused Trump and other Republicans of having "twisted and misconstrued my words to spread falsehoods rooted in hate.”

"Trump has doubled down on his party’s use of the Holocaust to score political points. Instead of recognizing that the accusations against me are false and that my words have been blatantly misconstrued, Trump has once again used his platform to incite hate and violence based on lies," she said in a statement. "This is yet another attempt by the administration and the GOP to try to distract from their horrible policies, lawless acts, and actual anti-Semitic rhetoric."

It’s heartening to see that Democrats have finally realized that Republicans are so far over the line into bad faith that the majority party feels free not to take the bait. This was not a failure of communication — Republicans just want to hammer down the perception that Muslim representatives have multiple loyalties.

Tlaib offered a nuanced perspective during a nearly hour-long interview. Yes, it is very tiresome to deal with Republicans, but Democrats must not play their game of victim-blaming to silence discourse, because the GOP will find a way to take offense no matter how straightforwardly things are said. Recall that Barack Obama always spoke with painstaking clarity, seeking to be considerate and inoffensive, and still triggered outrage from Republicans week after week.