"Investigating the investigators": Republicans roll out a dangerous new gambit

Republicans probably won't put Comey and Mueller in prison. The goal is to blow smoke and bewilder the voters 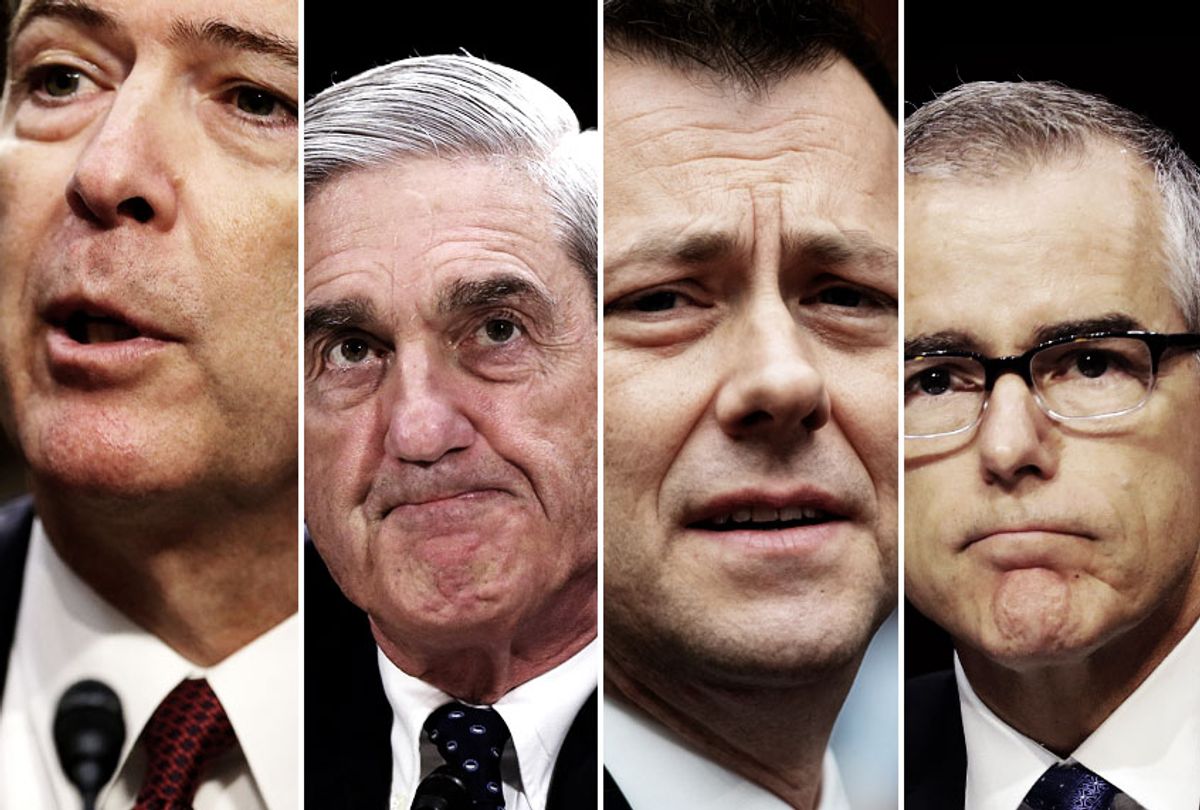 When President Trump's new attorney general, William Barr, announced at his first congressional hearing before the Senate Judiciary Committee that he believed "spying" on Trump's 2016 campaign "had occurred," Democrats on the committee and many in the press seemed to be shocked. In fact, Sen. Brian Schatz, D-Hawaii, asked Barr if he'd like to use another word, suggesting that the use of such an explosive term would "cause everyone in the cable news ecosystem to freak out." Barr declined and declared that he would be taking a look at the genesis of the investigation, saying, "I just want to satisfy myself that there were no abuse of law enforcement or intelligence powers."

Since Trump's incessant whining and complaining about the investigation is so common that people no longer take it very seriously, and only the most diehard right-wingers watch Fox News, a lot of people were taken aback by Barr's use of the word "spying." I don't think they realized what this strategy of "investigating the investigators" really amounts to. Neither did they fully recognize that Barr was not acting in good faith but rather as a hardcore right-wing partisan.

In retrospect, that should have been obvious from the beginning, and not just because Barr sent a memo to the White House (long before he was officially being considered as attorney general) explaining that the president cannot be subject to obstruction of justice laws. I'm referring to the fact that in Barr's previous tenure as attorney general, under George H.W. Bush, he tasked the U.S. attorney in Arkansas with digging up Whitewater dirt on then-candidate Bill Clinton during the 1992 presidential campaign.

As the legendary Gene Lyons noted in the Arkansas Times back in 2016, that U.S. attorney knew that the story was bunk as well as inappropriate and refused to proceed, telling Barr he would not be a party to such an overtly political act, and pointing out that "even media questions about such an investigation … all too often publicly purport to legitimize what can’t be proven.“ Indeed they do.

That investigation didn't proceed under Barr, but he'd set the wheels in motion for a series of pseudo-investigations that continued through all eight years of the Clinton administration. And what that U.S. attorney said was actually the point of the whole exercise. Republicans knew it didn't matter if the investigations of the president were based upon serious suspicion of illegal activity. It was the narrative that mattered. They didn't need to have a serious scandal like Watergate or Iran-Contra. They could the same model to leverage and pump up trivial or mundane events into major stories.

There were endless congressional hearings by the Republican majority in both houses of Congress and multiple independent counsels, all creating hysterical headlines which finally culminated in the Lewinsky affair and Clinton's impeachment. It was a right-wing production all the way. And it was highly effective. Clinton survived but the Republicans learned this was a useful way to keep their base engaged, particularly when the driver of right-wing politics during the 1990s, talk radio, was joined by the new powerhouse, Fox News.

Barack Obama was a harder nut to crack, but Republicans did their best. When the GOP took over the Congress in 2010 it immediately trumped up the so-called IRS scandal, alleging that the agency was targeting Tea Party groups for tax audits. There was also "Fast and Furious" about the Bureau of Alcohol, Tobacco and Firearms losing track of some guns, one of which ended up killing a federal officer. (The Second Amendment absolutists who refuse even to allow the government to track the guns of suspected terrorists never saw the irony in their hysteria about these particular guns falling into the wrong hands.)

And then there was Benghazi. That event, although tragic, was barely a blip in the history of U.S. foreign policy mishaps. But it spawned 10 investigations, six of those by Republican-controlled House committees and the others by the FBI, the State Department Inspector General and the Senate Intelligence Committee. In one of the most revealing comments ever made by a Republican official, then-House Majority Leader Kevin McCarthy, R-Calif., actually admitted that the reason they did it was purely political.

Benghazi didn't really hurt Hillary Clinton but it pointed the way toward the notorious "email scandal" that dominated the campaign — largely due to the media's longstanding obsession with Clinton scandals going all the way back to those heady days of Whitewater. We all know the result of that.

When Donald Trump started his term facing the most serious presidential scandal in history, however, Republicans had a problem. It was the FBI, the most revered police agency in the country, that had uncovered it, which made their usual character assassination a little bit risky. As we discovered, that didn't stop them. They went after the FBI as if the whole bureau was full of Clintons, not sparing even a thought for what conservatives had always held out as a sacred institution. For two years the president, his Fox News supporters and Republican allies in Congress built the "deep state" conspiracy theory of the Russia investigation, which holds that the FBI was out to get Donald Trump during the campaign, and when he heroically succeeded despite it all, they set out to overthrow him in an illegal coup. (One has to wonder why, if that was so, the conspirators didn't make sure their Russia evidence got out during the campaign. Republicans don't seem to see that big hole in their story.)

Now that Republicans have a congenial attorney general, they are using the power of the Department of Justice against itself. In addition to the two ongoing probes into the origins of the Russia case — along with the Mueller report, which goes into these questions in great depth — Barr has announced yet another "investigation into the investigation," as well as some kind of cross-agency inquiry with the CIA and the director of national intelligence. It's a wonder the Department of Justice will have time to do anything else.

The effect of this isn't necessarily to put FBI officials in jail, although that's not out of the question. The point is to mainstream the counter-narrative. Here's a good example of how that works:

Beyond the public relations there are serious issues at stake with all this, as Salon's Amanda Marcotte points out in this analysis of Barr's latest moves. And there can be no doubt about the chilling effect these investigations will have on FBI and intelligence officials throughout the government. They will think hard before they take another close look at Donald Trump's crimes going forward.

On a political level, Republicans are running a familiar game which nobody should toss off as mere partisan warfare. It's a crucial aspect of Trump's re-election strategy. If they can engage the mainstream media and throw everything they have at it, they may succeed at confusing the public and convincing them that all this smoke they're blowing means there must be a fire.