Is the gig economy a path to prosperity or the indenture of just getting by?

Democrats participate in a public cringe about going too far left, too fast, and working people get the gig economy 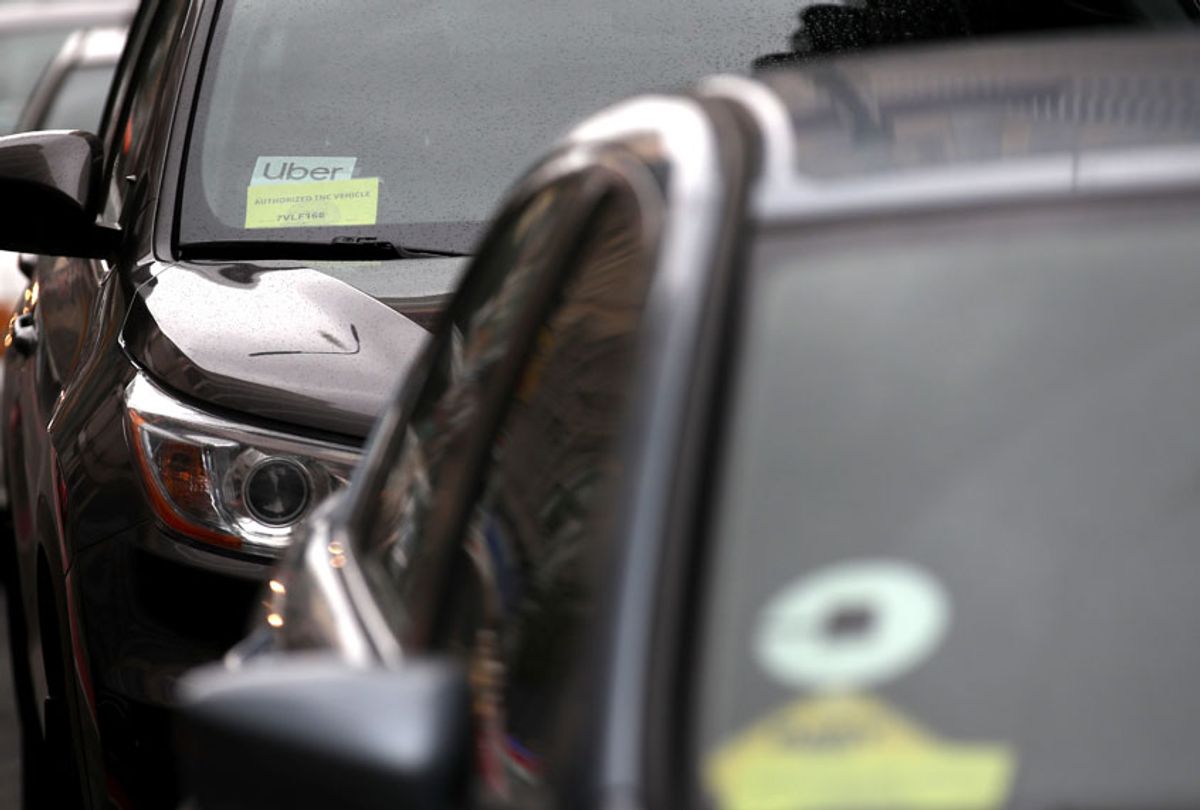 One of the best things that American capitalism has going for it is the myth machine that’s programmed generations of school age Americans to believe that our collective national story is a narrative of remarkable broad-based socio-economic progress.

It’s like that warm and fuzzy inner glow we get from Disney’s Epcot Center where we can trace “early man” executing cave drawings through the printing of the Gutenberg Bible all the way to today’s driverless car.

It’s all very patriotic and cuts down on the odds of incubating young radicals who might threaten capital’s established order or be in too much of hurry to make things better now. The one thing you don’t want to teach them is labor history because then they will know just how bad its been and for how long.

Yeah, people died for the cause of labor rights in the fervent hope something might get better. Owners didn’t just say “oh, you don’t want to bring your 11-year-old to work with you anymore and you want Sunday off? No problem.”

The cover story for the great disappearance of unions goes something like this: “Yes, at one time back in the era of black and white movies American workers were terribly exploited but then they organized unions and several Frank Capra movies later, the workers won their struggle and we got the minimum wage and the forty-hour week, but we really don’t need unions in modern times.”

Or, so we were told.

We know just how violently exploitative slavery was as an institution but how many Americans know that by some historical estimates half to three-quarters of European immigrants that came to the colonies had some form of indenture price hanging over their head.

Capital has been kicking labor’s ass since it wore powdered wigs in this country and the data shows it hasn’t let up since, as the widening wealth and income gap demonstrates.

Scroll forward a few hundred years, the entire recorded history of the country and according to a 2018 Federal Reserve Report  on the Economic Well Being of the U.S. Household  in the 21st century “four in 10 adults, if faced with an unexpected expense of $400, would either not be able to cover it or would cover it by selling something or borrowing money.”

So that’s the great wheel of progress? More like the randomness of the wheel of fortune. At least when you were indentured there was a chance you might get free food and shelter.

In the 2020 debate for the Democratic nomination, the constant refrain we hear from the moderators of the cable debate is that the greatest danger Democrats face is the perilous prospect they will go too far left, too fast.

If anything, we have been moving too slow for too long and we can see it in the data related to the growing affordability crisis that’s been documented by the United Way across the country with its analysis of the working poor in several states.

The national non-profit takes a detailed look at the local cost of living and wages for families they define as asset limited income constrained but employed (ALICE). In California 48 percent of the state’s families are either poor or struggle week-to-week to get by. In Florida, it is 46 percent. In Ohio, 42 percent are in that ALICE cohort. In New York, 45 percent either live below poverty or are struggling on the edge over which they will plummet after one major unexpected expense.

We did not get to these numbers overnight. This is the consequence of decades of permitting corporations to grow larger and larger as the union movement shrunk to a fraction of what it once was. Fifty years ago, almost a third of Americans were in a union while today it is just one in ten. Is it any wonder that since the 1970s wages have declined or stayed flat as worker productivity skyrocketed along with the cost of living?

As I have written in this space before, there are signs of a grass roots labor union revival born out of something that has been brewing for several Presidential election cycles. It is driven by data that shows this generation of young adults are on track to be the first that won’t do better than their parents economically.

For me it appears to be most evident In New York State that has a bit of a head start with one of the highest concentrations of organized labor in the country.  In the next few weeks the state’s union movement is hoping to right what New York State AFL-CIO President Mario Cilento, believes is a “decades old disgrace” with the passage this session of the Farmworkers Fair Labor Practices Act (S-2837/A-2750).

In the 1930s America’s farmworkers were excluded from the landmark protections extended to the rest of the nation as codified during the New Deal. The 1935 National Labor Relations Act and the 1938 Fair Labor Practices Act expressly exempted them, along with domestic workers.

These landmark reforms codified the concept of overtime and a minimum wage.

“People think we all took these huge leaps forward, but these reforms were not universal,” said Joshua Freeman, a professor and labor historian at the City of New York’s Graduate Center. “It depended on your race and gender and the farmworker and domestic worker cutouts were to get southern Congressional Democrats on board who did not want to see black workers covered.”

During the eighty-plus years since, resistance to farmworkers organizing and gaining legal work place protections has remained intense with less than one percent of the workforce being able to benefit from union membership.

In New York State’s the drive to, at long last, provide farmworkers with labor rights they have been denied for decades is led by 33-year-old State Senator Jessica Ramos, who was first elected last year and chairs the State Senate Labor Committee.

“We must ensure that farmworkers are granted the rights that all other workers in our state are afforded — a day off, overtime pay, unemployment benefits and the right to collectively bargain,” she said in an email exchange.

Ramos has held hearings across the state to raise the visibility of the issue and is trying to forge a consensus. “I am talking to all stakeholders in this issue and I have toured the state talking to farmers and farmworkers alike,” she said. “Farm work isn’t like a nine-to-five office job and is greatly impacted by inclement weather. I hope to come to an agreement and pass the bill by the end of session.”

Ramos has worked for two unions and sees advancing labor’s interests as central to her agenda. “Despite having the highest union density in the country, there are too many unorganized and disorganized industries in New York,” said Ramos. “As the daughter of immigrants, one of whom is a former member of the now-defunct International Lady Garment Workers Union, I’ve always felt a sense of responsibility in bridging the gap between born and raised New Yorkers like me and immigrants like my parents.”

The New York State AFL- CIO’s Cilento believes the farmworker labor standards bill, long a state labor priority, is now closer than it has ever been to becoming law

.“Farmworkers don’t have the right to overtime pay which means a farmworker can work 60,70, 80 hours a week at the discretion of their employer for as long as the employer sees fit,” Cilento said “And because they don’t have a right to join a union, to collectively bargain. they don’t have any say on the matter.”

Yet, even as the state AFL-CIO was lobbying hoping to finally deliver for farmworkers, Cilento said he saw a bigger challenge ahead for organized labor with the explosion of the so-called gig-economy.

According to a recent study by Cornell University’s Worker Institute, sponsored by the state AFL-CIO, the exponential growth in the on-demand workforce of independent contractors that’s managed by online platforms, or “apps,” is eroding long-standing legal protections for labor.

Intuit Inc, the parent company of Turbo Tax, estimates that almost 34 percent of the workforce today is in the gig economy and predicts that share to rise to 43 percent by 2020. No doubt, many of the participants in that realm also are still working a conventional job.

But for the millions of Americans who work only in the overall gig economy, there is no

“We have a class of workers who are being denied basic rights that most other workers have,” Cilento said in a statement when the report was issued on April 30. “This is a turning point in our changing economy that reeks of early 20th century working conditions of low wages and discrimination.”

“On-demand platform employment is but the latest demonstration of destabilizing changes in work, conditions, and labor markets that have developed since the 1980s,” according to the Cornell Worker Institute report commissioned by the NYS-AFL-CIO.

The research paper continues, “On-demand industry practice, represented by such companies as Uber, Lyft, Postmates, and TaskRabbit, is to hire and dispatch workers as “independent contractors. These workers are, however, not true ‘independent contractors’; they are not in business for themselves and cannot freely negotiate employment terms.”

“It is going to be very important for taxpayers,” Cilento warned. “These workers will be working 60 hours a week and not making even the minimum wage, which means ultimately if you have a growing percentage of the economy with workers working at these lower rates the general public — taxpayers are going to be subsidizing their earnings with public assistance because we have a growing number of people who are not making ends meet.”

As a consequence, Cilento predicts conventional brick-and-mortar businesses will increasingly be handicapped by having to live up to their legal obligations under existing labor law that protects their employees as their web-based competitors can increase their profits and increase their market share because their business model is based on evading them.

So much for social progress.