“An Oreo?”: 5 of the most ridiculous moments from Ben Carson’s political career

When Katie Porter asked Carson to “explain” the “disparity in REO rates,” he asked if she was talking about cookies 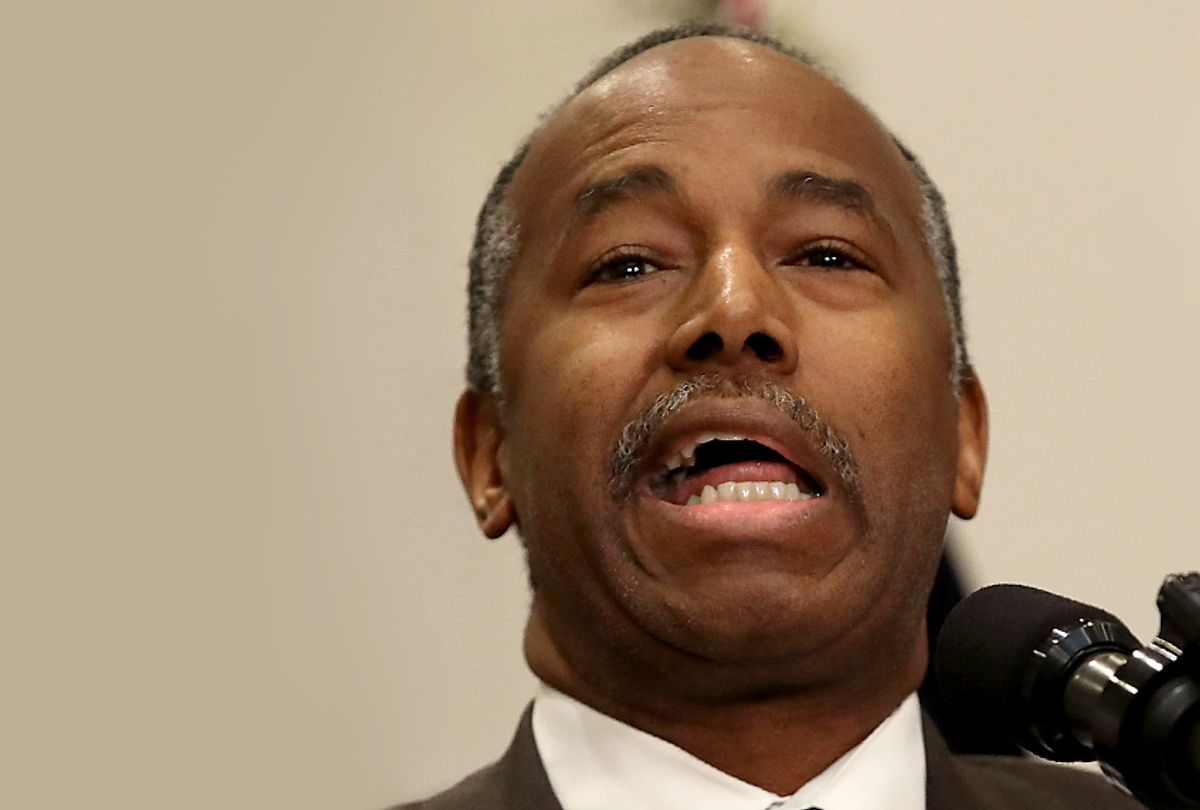 When Housing and Urban Development Secretary Ben Carson appeared before Congress on Tuesday, he exposed his ignorance of the department he runs and his contemptuousness of government oversight. By the end of the day, he had been made to look entirely ridiculous.

But it was only one of the many embarrassing days in Carson’s political career.

Here are five of the most absurd things Trump’s Housing and Urban Development secretary has said or done:

1. Carson tried to “reclaim” his time.

When Rep. Ayanna Pressley of Massachusetts aggressively grilled Carson on Tuesday during a congressional hearing about the neglect of public housing under the Trump Administration, Carson — obviously annoyed — asserted that he was “reclaiming my time.” And the congresswoman reminded Carson of the rules of congressional hearings, advising, “You don’t get to do that.” Rep. Maxine Waters concurred with Pressley, reminding Carson that “the time belongs to the gentle lady.”

Pressley wasn’t the only member of the House who questioned Carson during Tuesday’s hearing on housing policies: Rep. Katie Porter of California questioned him as well — and when Porter asked Carson to “explain” the “disparity in REO rates,” he didn’t know what she was referring to. Carson responded, “An Oreo?” And Porter explained that REO stands for “real estate owned,” which is “what happens when a property goes to foreclosure. We call it an REO.”

In response to Carson’s lack of familiarity with the term REO, attorney Luppe Luppen commented, “The fact (that) Carson doesn’t know what REO means is a pretty good indicator that he’s never sat down and figured out what his agency is actually doing in the world.”

3. Carson said Baltic states should ‘get involved in NATO’

Before Carson launched his presidential campaign in 2015, the New York Times reported that he “acknowledged being something of a novice on foreign affairs” — and Carson showed just how much of a novice when he commented that the Baltic states should “get involved in NATO.” But in fact, the three Baltic states (Estonia, Latvia and Lithuania) are all members of NATO (the North Atlantic Treaty Organization). They didn’t need to “get involved” in NATO in 2015 because they were already members.

In May 2016, Carson spoke highly of Sen. Ted Cruz, who had competed bitterly with Donald Trump for the 2016 GOP presidential nomination before finally dropping out of the race. Carson, during an interview with Fox News Radio’s John Gibson, commented that he would like to see Cruz serve as U.S. attorney general so that he could prosecute Hillary Clinton.

5. Carson spent up to $31,100 to furnish his office—and later blamed his wife

Carson considers himself a staunch fiscal conservative. But in late 2017, he drew widespread criticism for spending up to $31,000 in taxpayer dollars to furnish his office with a lavish dining room set. And when Carson was questioned by the House Appropriations Committee in March about being so careless with taxpayer dollars, he said he “dismissed” himself from the decision and “left it to my wife, you know, to choose something.”