Dishonoring the troops on Memorial Day: Trump's pardons for war criminals are a massive insult 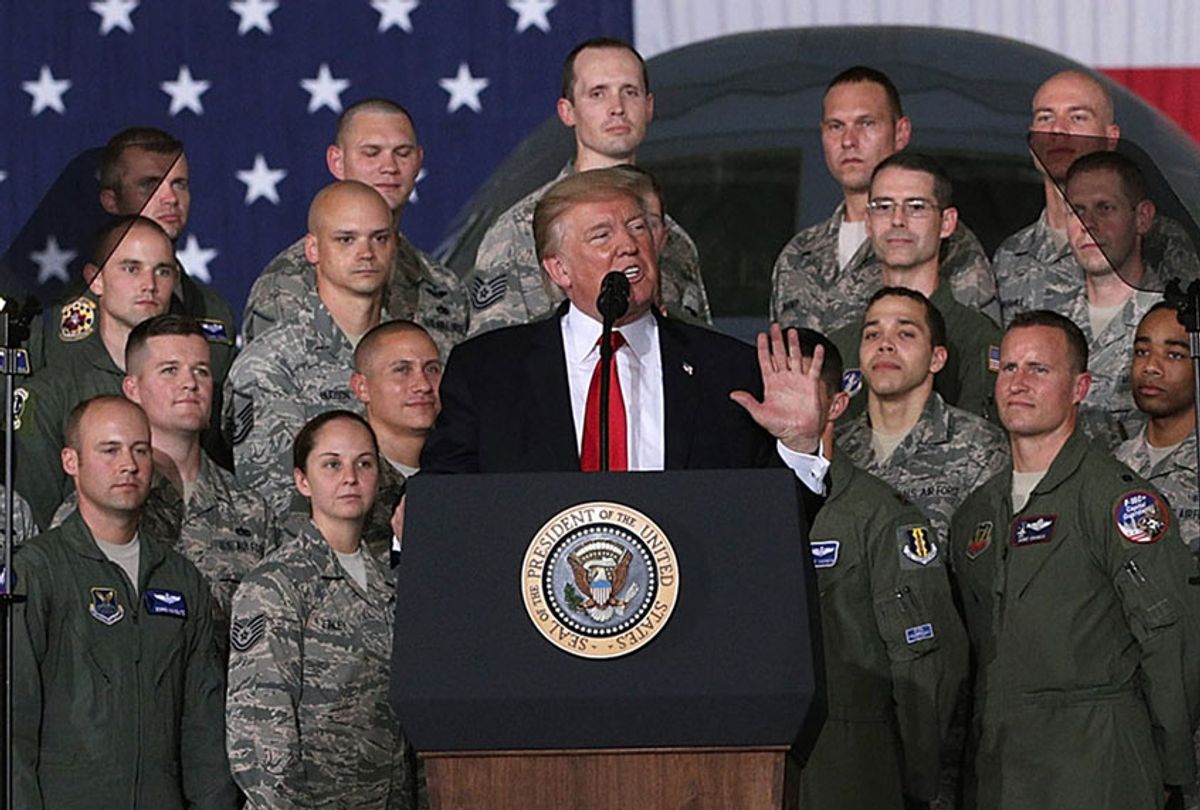 President Donald Trump speaks to Air Force personnel during an event September 15, 2017 at Joint Base Andrews in Maryland. (Getty/Alex Wong)
--

Donald Trump evaded the draft as a young man when his father leaned on a doctor — who was one of Fred Trump's tenants — to diagnose him with "bone spurs." Now he wants America to believe that the best way to honor the troops is by pardoning convicted or accused war criminals. Trump's shadow cabinet of Fox News talking heads has been heavily lobbying the president, both on-air and in private, to issue pardons to U.S. soldiers or military contractors, one of them a mercenary convicted in civilian court, who have been accused of murdering civilians and extrajudicial killings.

Over the weekend, the New York Times reported that the White House is attempting to expedite the pardon process, presumably so Trump can announce, with great fanfare, that he's pardoning these men on Memorial Day weekend. Trump no doubt wishes to present these pardons as some huge favor to the armed forces,  an act of patriotic defense of the troops who are allegedly being oppressed by obscure but powerful forces of "political correctness."

But if Trump issues these pardons, in reality he will be dishonoring the armed services. These pardons are an insult to every service member who was involved in upholding the law in these cases, many of whom did so at great risk and personal cost. It will be an insult to those troops who do their jobs, however miserable that can get, without committing war crimes. And it's an insult to the reputation of the U.S. military as a whole, as well as an effort to reinforce the perception that the American troops behave without honor.

On Wednesday morning, Brian Kilmeade of Fox News defended the potential pardon of special operations chief Edward Gallagher — who is accused of sport-hunting civilians in Iraq, including a schoolgirl walking with friends and an unarmed old man — by saying that his critics "believe the wrong story."

Among those people that Kilmeade and Lahren paint as terrorist-loving liars? Seven Navy SEAL commandos who served in Iraq under Gallagher.

As the New York Times reported in April, this group of Navy SEALs "had spoken up, repeatedly" about Gallagher's actions, but were brushed off by military officials. Frustrated, they "called a private meeting with their troop commander," only to be told to keep their traps shut or face consequences such as losing promotion opportunities. But these service members persisted, blowing  the whistle to authorities outside the SEALs and finally getting a court martial for Gallagher.

For their courage, these service members are being accused by Fox News talking heads of lying, and of loving terrorists  more than they love their fellow American soldiers. Now the president is likely to enshrine this defamation of these brave SEALs by issuing Gallagher a pardon.

This is not unique. In many of the cases where Trump is reportedly considering pardons, the people who spoke out or bore witness to the crimes were themselves members of the armed forces.

First Lt. Clint Lorance, who Trump is reportedly considering pardoning for his convictions on charges of murdering two Afghan civilians, faced testimony from nine members of his own platoon, who turned him when he attempted to falsify reports. One fellow soldier also said that Lorance ordered him to shoot a child who tried to retrieve the murder victims' bodies, and he refused.

Nicholas Slatten, a Blackwater contractor who was convicted in civilian court in 2018 for the premeditated murder of Iraqi civilians, also faced testimony from uniformed members of the armed services.

Excepting Slatten, who wasn't in the military when he committed his crimes, these crimes are prosecuted inside the military. Judges, lawyers and law enforcement in these cases were almost exclusively members of the armed services themselves. By pardoning those they have arrested, charged and convicted, Trump is suggesting these these people — themselves authentic examples of "the troops" — are somehow not doing their job.

This is even more clear when one considers how the defense attorney for Major Mathew Golsteyn, who is charged with the murder of an Afghan man, talks about the Army. Golsteyn's lawyer has claimed that the prosecution is a "vindictive abuse of power." Pardoning Golsteyn would be tantamount to Trump endorsing this view of the Army's leadership.

Whether one agrees with this logic or not, one reason that such criminal cases are tried within the military is because military codes against war crimes are meant to protect the military's integrity and reputation. The goal and the intention is to encourage the view that American soldiers are honorable men and women who will police themselves when they do wrong, and discourage the view that they are immoral killers on a murder spree.

In the charging papers for Gallagher, for instance, military prosecutors repeatedly characterize his actions as being "of a nature to bring discredit upon the armed forces."

Some retired military leaders are speaking out against the pardons for exactly this reason. Retired Marine Commandant Gen. Charles Krulak has issued a statement trying to discourage Trump from issuing these pardons. If the president pardons these men, Krulak writes, "he relinquishes the United States’ moral high ground and undermines the good order and discipline critical to winning on the battlefield."

In sum, it's not actually helpful to the troops to celebrate murderers and war criminals and hold them out as exemplars of the armed forces. It makes everyone in the military look bad and equates being a soldier with being a murderer. It makes the missions of U.S. military forces more difficult, since civilians they encounter will correctly believe that the president himself is encouraging American troops to kill people for sport.

Obviously, the reality of life in the military is complex. Many of those who enlist are good people who are trying to do right, as evidenced by the number of soldiers willing to blow the whistle when they see war crimes. Unfortunately, the military can also attract awful people who see enlisting as an opportunity to commit acts of violence and get away with it. If we want to ensure that the former are the face of the U.S. military, while the latter are punished or expelled, then the laws against human rights abuses have to be vigorously enforced.

By pardoning those convicted or accused of war crimes, Trump is loudly and clearly indicating that "war criminal" is the reputation he wants American troops to have in the eyes of their fellow Americans and the entire world. If someone on the left insulted the military's honor in this way, the Fox News crowd would never stop screaming. But when Trump pushes the idea that all soldiers are war criminals, and that random, brutal violence against civilians is acceptable Fox News and the president's supporters cheer him on. It's a national disgrace.