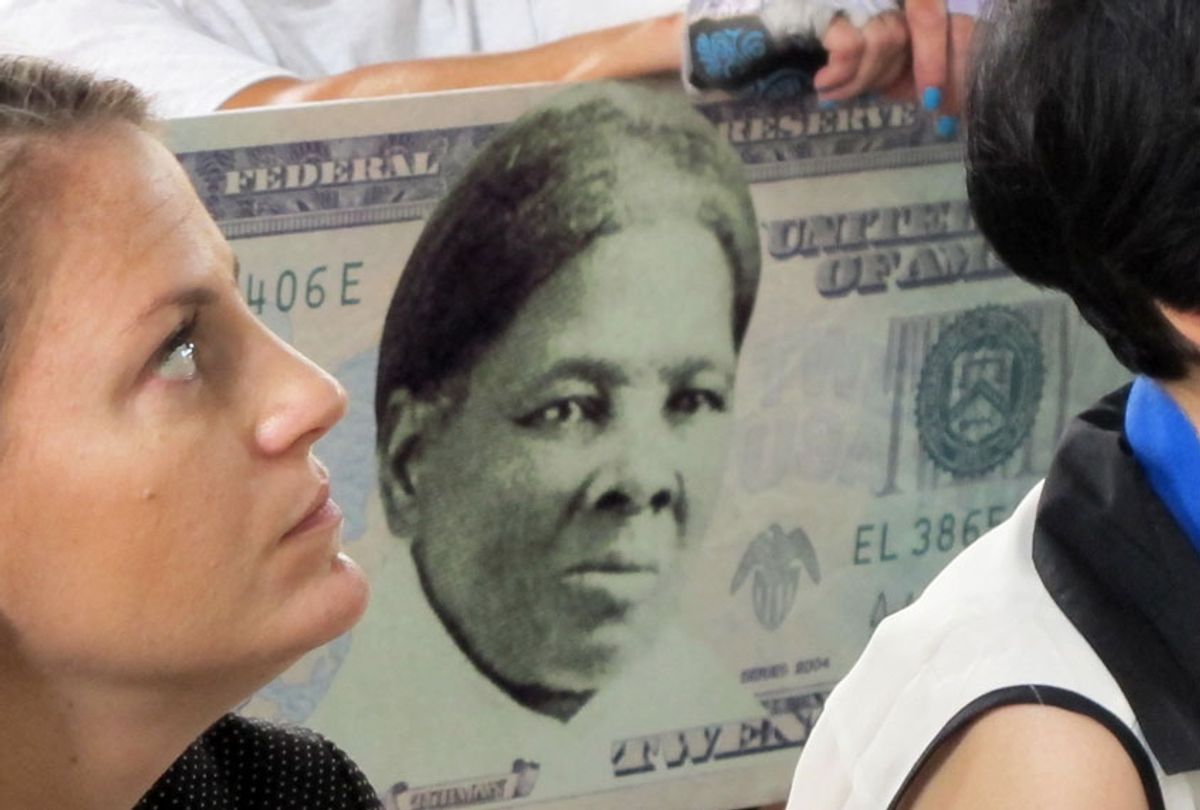 a woman holds a sign supporting Harriet Tubman for the $20 bill during a town hall meeting at the Women's Rights National Historical Park in Seneca Falls, N.Y., Aug. 31, 2015. (AP/Carolyn Thompson)
--

President Donald Trump is postponing the circulation of a $20 bill with American abolishionist Harriet Tubman's portrait on it until after 2020.

The decision was announced by Treasury Secretary Steven Mnuchin on Wednesday, who said no new designs involving Tubman would be revealed for the $20 bill until at least 2028, according to CNBC. The original plan had been for a $20 bill featuring Tubman alongside its traditional figure, former President Andrew Jackson, to be unveiled in 2020. This would have coincided with the centennial anniversary of the passage of the 19th Amendment, which gave women the right to vote. Tubman was an outspoken suffragette in her later years.

Mnuchin's statement came out while he was being questioned by Rep. Ayanna Pressley, D-Mass., during a hearing before the House Financial Services Committee.

"The primary reason we have looked at redesigning the currency is for counterfeiting issues. Based upon this, the $20 bill will now not come out until 2028," Mnuchin told Pressley. "The $10 bill and the $50 bill will come out with new features beforehand."

The decision to put Tubman on the $20 bill was made by former President Barack Obama and his Treasury Secretary Jack Lew back in 2016.

"The decision to put Harriet Tubman on the new $20 was driven by thousands of responses we received from Americans young and old," Lew said at the time. "I have been particularly struck by the many comments and reactions from children for whom Harriet Tubman is not just a historical figure but a role model for leadership and participation in our democracy."

But was there more behind Trump's decision than what Mnuchin told Pressley? During a town hall event in 2016, Trump described the decision to put Tubman on the $20 bill as "pure political correctness" and — as the administration repeatedly held off on implementing that plan — one year later Mnuchin told CNBC that "ultimately, we will be looking at this issue. It's not something I'm focused on at the moment."

Trump has repeatedly expressed his admiration for Jackson, even though the seventh president falling out of favor among historians due to his genocidal campaigns against Native Americans. Trump has repeatedly praised Jackson in his speeches and on Twitter; made a pilgrimage to the Hermitage, Jackson's former plantation; and placed a portrait of Jackson in the Oval Office, according to PolitiFact. Trump once falsely claimed that Jackson had been "really angry that he saw what was happening with regard to the Civil War" — even though the Civil War broke out 16 years after Jackson died.

During a speech at the Hermitage, Trump explained his reasons for admiring Jackson, describing the seventh president as a man who "confronted and defied an arrogant elite. Does that sound familiar to you? I wonder why they keep talking about Trump and Jackson, Jackson and Trump. Oh, I know the feeling, Andrew."

Tubman was an abolitionist who helped slaves find their way to freedom on the Underground Railroad, served as an armed scout and spy for the Union Army during the Civil War and spent her later years fighting for women's right to vote.