After Trump walked out of meeting, Pelosi told Conway: "I’m responding to the president, not staff" 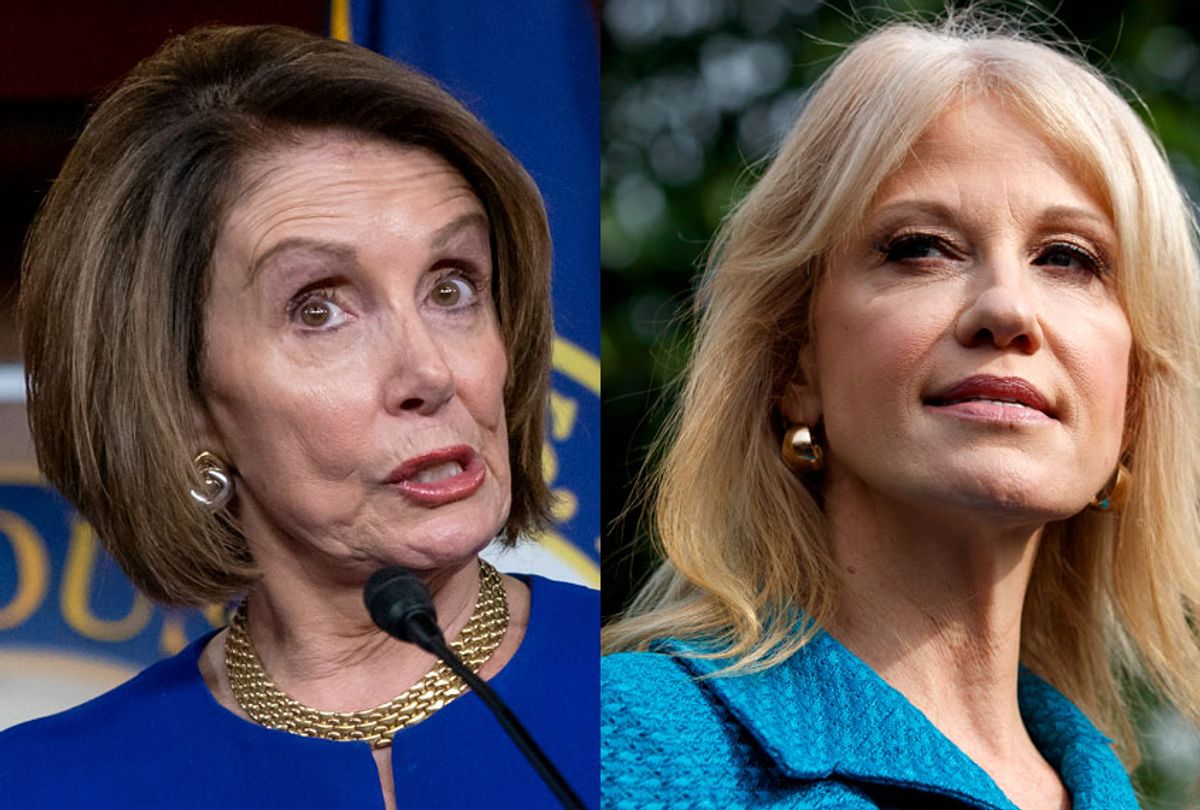 White House counselor Kellyanne Conway clashed with Speaker of the House Nancy Pelosi after President Donald Trump stormed out of a meeting with Democratic leadership at 1600 Pennsylvania Avenue.

The exchange occurred after Trump berated Pelosi, D-Calif., and Senate Minority Leader Chuck Schumer, D-N.Y., for allegedly prioritizing congressional oversight of his administration over legislation, according to The Hill. The president was particularly incensed with Pelosi's claim that he had "engaged in a cover-up," an accusation which he later denounced on camera during an impromptu press conference in the Rose Garden.

"I don't do cover-ups," the president proclaimed behind a lectern adorned with a poster reading "no collusion" and "no obstruction."

After Trump's exist, Pelosi reportedly discussed with those gathered in the Cabinet Room how two of Trump's predecessors, former Presidents Thomas Jefferson and Theodore Roosevelt, set aside their differences in order to work with their political opponents on addressing infrastructure. She added how she was not surprised Trump had chosen to do the opposite, prompting her exchange with Conway.

According to multiple reports, Conway asked Pelosi if she would like to offer "a direct response to the president."

"I don’t talk to staff," Pelosi responded. "I talk directly to the president."

Pelosi and Schumer, the two Democratic leaders, held a joint press conference after they returned to Capitol Hill.

Schumer noted the contradiction between Trump's words and actions — he had been working with Democrats for weeks as multiple investigations moved forward.

"But now that he was forced to actually say how he would pay for it, he had to run away," Schumer said, adding, "We are interested in doing infrastructure — it's clear the president isn't."

As tensions escalate between Trump and Pelosi, the speaker of the House has also been criticized by some of her Democratic colleagues for being insufficiently tough on the president, particularly when it comes to opening an impeachment inquiry against him.

"I trust the speaker is taking a measured approach to ensure that we're moving everyone forward," Rep. Alexandria Ocasio-Cortez, D-N.Y. told a reporter Tuesday when discussing the speaker of the House's reluctance to move forward on impeachment. "I know that, you know, being a speaker is hard. Holding this party together is a difficult task, but I think that we know what we need to do. I personally believe that we have to move forward."