In response to Rex Tillerson's comments, Trump tweeted Thursday his former chief diplomat was “dumb as a rock” 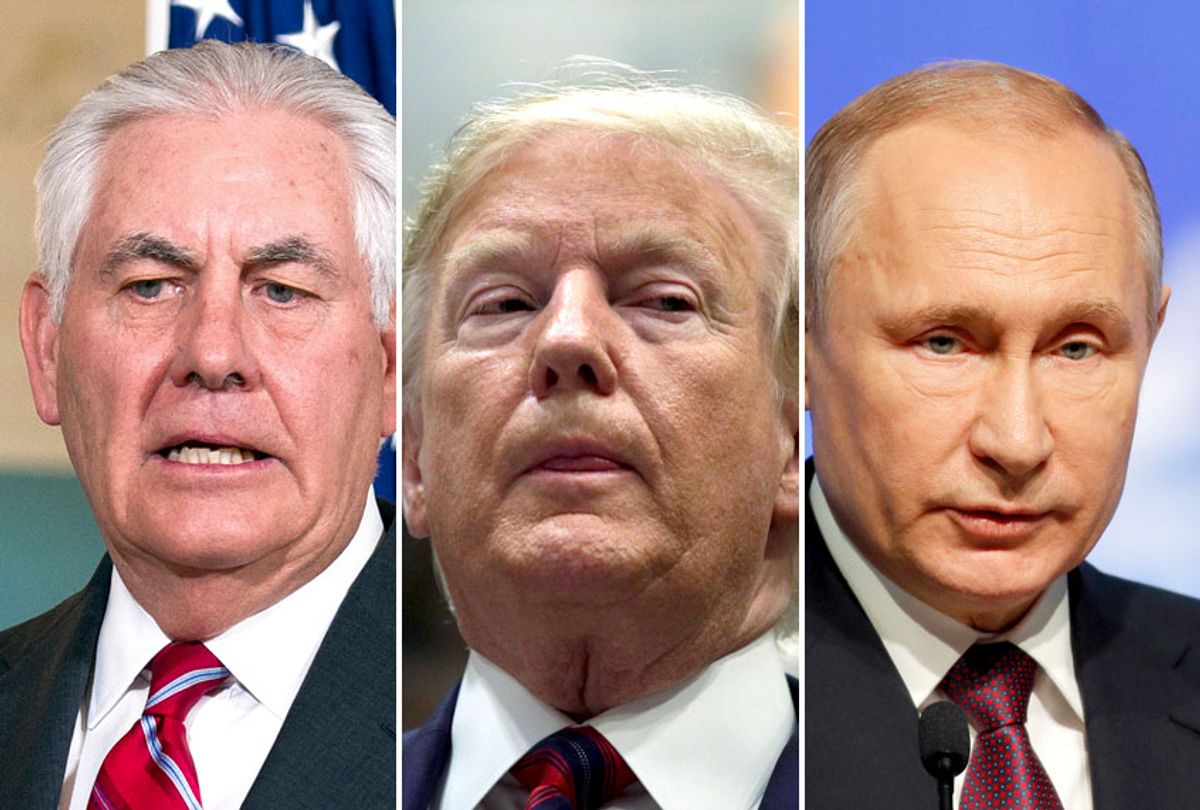 Former Secretary of State Rex Tillerson recently told a congressional committee that President Donald Trump was insufficiently prepared in 2017 when he met with Russian President Vladimir Putin in the Germany city of Hamburg.

Tillerson's observations were made during a meeting with the House Foreign Affairs Committee, according to The Washington Post. Although the meeting of the two leaders was supposed to be brief and involve little more than an exchange of pleasantries, it wound up lasting for more than two hours and covered a broad span of geopolitical topics important to the Russian despot.

As one committee aide told the Post, Tillerson and the members of the House Foreign Affairs Committee "spent a lot of time in the conversation talking about how Putin seized every opportunity to push what he wanted. There was a discrepancy in preparation, and it created an unequal footing."

Tillerson told the committee, led by Rep. Eliot L. Engel, D-N.Y., that Putin was simply better prepared than Trump to discuss the various issues raised by the Russian autocrat, which put the American president at a marked disadvantage. The former secretary of state's revelations about Trump's meeting with Putin at Hamburg are noteworthy, because although the president has been criticized for the secrecy of his interactions with the Russian authoritarian, Tillerson was present when Trump talked with Putin in Germany.

In response to Tillerson's comments, Trump tweeted Thursday that "Rex Tillerson, a man who is “dumb as a rock” and totally ill prepared and ill equipped to be Secretary of State, made up a story (he got fired) that I was out-prepared by Vladimir Putin at a meeting in Hamburg, Germany. I don’t think Putin would agree. Look how the U.S. is doing!"

Trump has often boasted of how he does not feel the need to prepare before important foreign policy meetings. Prior to a summit with North Korean Supreme Leader Kim Jong-Un, Trump said, "I don’t think I have to prepare very much. It’s about attitude. It’s about willingness to get things done. So this isn’t a question of preparation. It’s a question of whether or not people want it to happen, and we’ll know that very quickly."

Perhaps Trump's most controversial meeting with Putin was the Helsinki summit in July. During that event, Trump entertained handing over former American ambassador Michael McFaul and British billionaire and whistleblower Bill Browder to Putin.

"But let's be clear: What Putin was doing was assigning moral equivalency to a legitimate indictment with lots of evidence against several Russian military intelligence officers for violating American sovereignty in 2016 during the presidential elections, with a completely fabricated, cockamamie story invented by Putin," McFaul told Salon at the time. "To even, for a moment, give any kind of dignity to what President Putin proposed was not in America's national interest, from my point of view."

Browder had a more succinct way of expressing his reaction: "I have no idea what motivates his behavior. All I can say is that the idea that he seemed to entertain for a few days of handing me and 11 Americans over to Vladimir Putin for our work on the Magnitsky Act seemed pretty horrifying."