Love and loss in L.A.'s Eastside: Just by existing, Tanya Saracho's "Vida" is a political act 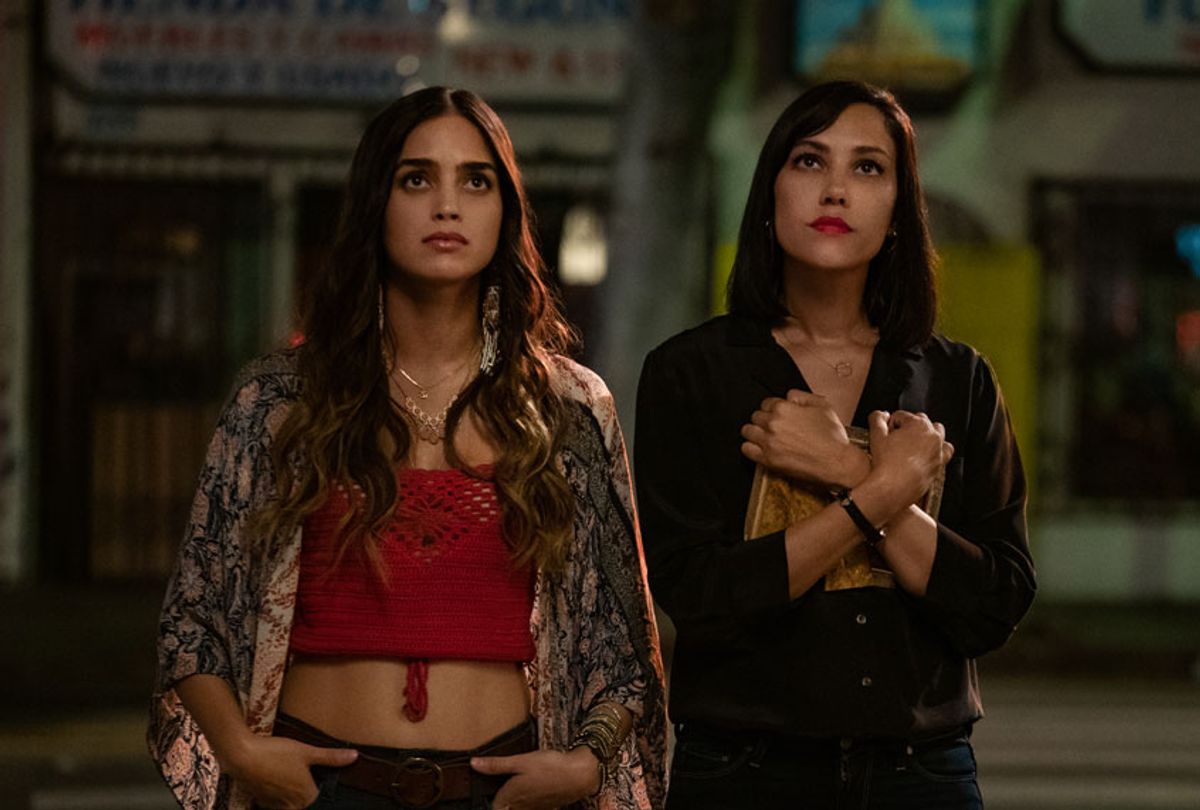 The second season of “Vida” opens with, as series creator Tanya Saracho described it, “a big bold, um, sexual thing.”

At first it doesn’t appear to be. The scene begins with a tight shot of Lyn Hernandez (Melissa Barrera) resting on a pillow, her face half-bathed in blue light, her lips upturned in a satisfied smile. She looks like she’s daydreaming, which isn’t incongruous for a character primarily defined by her aimlessness. Then the shot widens to show a stranger's hands, other bodies, and lots of skin.

“We had to be very careful,” Saracho told Salon in a recent interview about the 10-episode second season. “It's my number one on the call sheet, my dear friend Meli, that I have to take care of in that scene when we shot it . . .  but the way that scene got built, the way we shot it, I'm very proud of. Because we took a lot of care of all of them. None of these actors had done sex scenes before, you know? So my promise to them was like, 'I will take care of you.' And I think I've kept it.”

They also seamlessly blend into the series’ portraits of Lyn and Emma Hernandez (Mishel Prada), estranged sisters drawn back to their childhood home in East Los Angeles after their mother Vida dies. In her will Vida leaves the building where they grew up to Lyn, Emma and Eddy (Ser Anzoategui), Vida’s long-presumed roommate who Lyn and Emma discover is actually her wife.

Love and loss intertwine like familiar lovers in this series, a sensation that plays out through its craggier emotional moments in addition to its sexual interludes, all of which are directed by women.  Like other Starz dramas, this female-centric take on sexuality shows through in the half-hour drama’s portrayals of intimacy, but it's also present and directive in every relationship's portrayal, whether between the sisters and Eddy or in their interactions with the people in the community.

“Vida,” premiering Sunday at 9 p.m. on Starz and available now via Starz on demand and its app,  is a gift to the TV drama field, particularly dramas about women. Mourning may hover in the background of the Hernandez’s lives, but they’re also pressing through the kinds of issues faced by women doing their best to navigate tough parts of life without a map — or worse, with a series of previously hidden obstacles to overcome before they can move forward.

"Vida" also is consciously crafted from the perspective of identity. Women of all backgrounds still consider “Sex and the City” to be the standard bearer for women’s stories, and black women were gifted versions of themselves in “Living Single,” “Girlfriends” and “Being Mary Jane.” But until “Vida,” there hasn’t been a half-hour drama that looks, eyes wide open, at issues of  female agency and culturally-specific attitudes toward queerness through a Latinx lens.

“This show, just by existing, is a kind of a political act,” Saracho said. She's right. Small though the audience for the first season of "Vida" may be, it means something that people are watching, particularly given that with the fate of Netflix's "One Day at a Time" in limbo, Saracho is the sole Latinx series creator and showrunner with a series in production right now.

“TV can change perspectives,” she offered.  “That person in middle America that maybe hasn't met a Puerto Rican or a Mexican, but they know tacos, right? They love Mexican food. But they don't love me. They don't know me.”

Saracho’s entire writers room is Latinx. “There's one cis male and the rest are female, mostly queer,” she said.  “. . .Both of my [directors of photography] are female … all my editors are female, and the props master is a queer Mexican-American.” All of Season 2’s directors are Latinx as well, a roster that includes Gandja Monteiro, Catalina Aguilar Mastretta, and Jenée LaMarque.

“How we make the show is as important as the show we're making,” she added.  “Whether we're shooting those sex scenes or anything else, it matters how it's getting crafted and who crafting it. In all three stages, as I call it — the first trimester is the writers, the second is the production and the third is editors — women are at the helm of each and they have skin in the game.”

But “Vida,” which films around Boyle Heights in Los Angeles, is not a show that stands purely as a beacon of representation. In this second season, the story moves past Season 1’s introductory growing pains to dive more completely into issues of personal and cultural identity, as Emma and Lyn grapple with their shared and separate identities.

Saracho said Starz charged her to create a series centered upon issues of something about “gentefication” on the Eastside of Los Angeles that skewed female and is about millennials. Hence, Emma and Lyn.

Emma’s sexual fluidity and refusal to identify as a lesbian, bisexual or anything in particular places her at odds with her girlfriend Cruz (Maria Elena Laas).  Lyn, meanwhile, can’t outrun mistakes that she made with her old boyfriend Johnny (Carlos Miranda) or her reputation for flakiness.

Both take heat from the people in the neighborhood, particularly strident activist Marisol (Chelsea Rendon), one of the people who penalizes them for failing to meet some invisible standard of cultural identity. Even so, these concerns are not the central tension in these next chapters.

In Season 2 Emma and Lyn care for Eddy as she recovers from a vicious assault. They’re also defining family for themselves, and coming to terms with what their family means to the community at large.

Vida’s building houses a dive bar, a social hub that once catered to the LGBTQ community. Above it are affordable apartments Vida rented to locals who might otherwise be displaced by developers who are changing the neighborhood to appeal to wealthier renters and buyers. In other words, Emma and Lynn are part of a long-standing cultural bulwark slowly being chipped away by gentrification.

But Emma and Lyn themselves represent agents of “gentefication,” a term used to describe the transformation of a neighborhood by upwardly-mobile Latinx property owners at the expense of the lower-income families who have lived there for generations.

“The thing is that the more we talk to people in the neighborhood, we realized that owning a building in this neighborhood — and only about 30% of the people own their property — is a privilege. These girls are privileged,” Saracho says. “In the second season they walk in that. And the community will react to that. Because they react to any little change that you make.”

Gentrification plays out in subplots across a number of TV series, including HBO’s “Insecure,” Showtime's “The Chi” and Netflix’s “She’s Gotta Have It,” returning for its second season on Friday. Even CBS cozies up to this socioeconomic hot-button in the friendliest way possible by way of “The Neighborhood,” which was recently renewed for a second season.

But aside from that network series, taking a realistic tough look at these class-based frictions or intracultural discrimination doesn’t often occur on TV, “because it's painful, right?” Saracho said. “And there's, like, bone-cracking whenever you're re-shifting and rebuilding. You have to crack bones in a way.”

The second season doesn’t come across that way. Its episodes progress more smoothly and assuredly than the first, which Saracho admits was designed to be a six-episode introduction and couldn’t adequately explore every character.  Because of this, she noticed fans reacting to Lyn’s free-spirited nature more harshly than she would have predicted.

In part, though, this is because the first six episodes focused on what Saracho describes as Emma's “core damage,” the result of being kicked out by her mother after Vida caught her with another girl. Naturally this makes Emma’s posthumous discovery about her mother particularly agonizing.

“In second season we see what damage Vidalia did to Lyn that you might not consider,” she hinted. “But it makes you understand, 'Oh, that's why you're the way you are. And your mother did that too.' Which is a little bit more nuanced than, 'My mother kicked me out because she saw I was messing around with a little girl." That's Emma. It's so clear. You know what that is. And then when you find out that she's gay, it's so clear.”

“With Lyn it's a little bit more about the fact that nobody believes in her, even herself, and doubts her,” Saracho added. “That's a very millennial struggle. So Lyn, in this season, It's like, 'I hope she wins.’”

Showing that struggle means displaying every part of these men and women, heart, bones, skin and all, something Saracho said the dominant culture doesn't often see on TV in general, let alone via Latinx characters.

“They haven't allowed us to have complex versions of our ourselves,” she said. Through her lens, we do.