Men, we need to stay in the pro-choice fight — in Alabama and beyond

If women aren't free to make their own reproductive health care decisions, nobody can be free 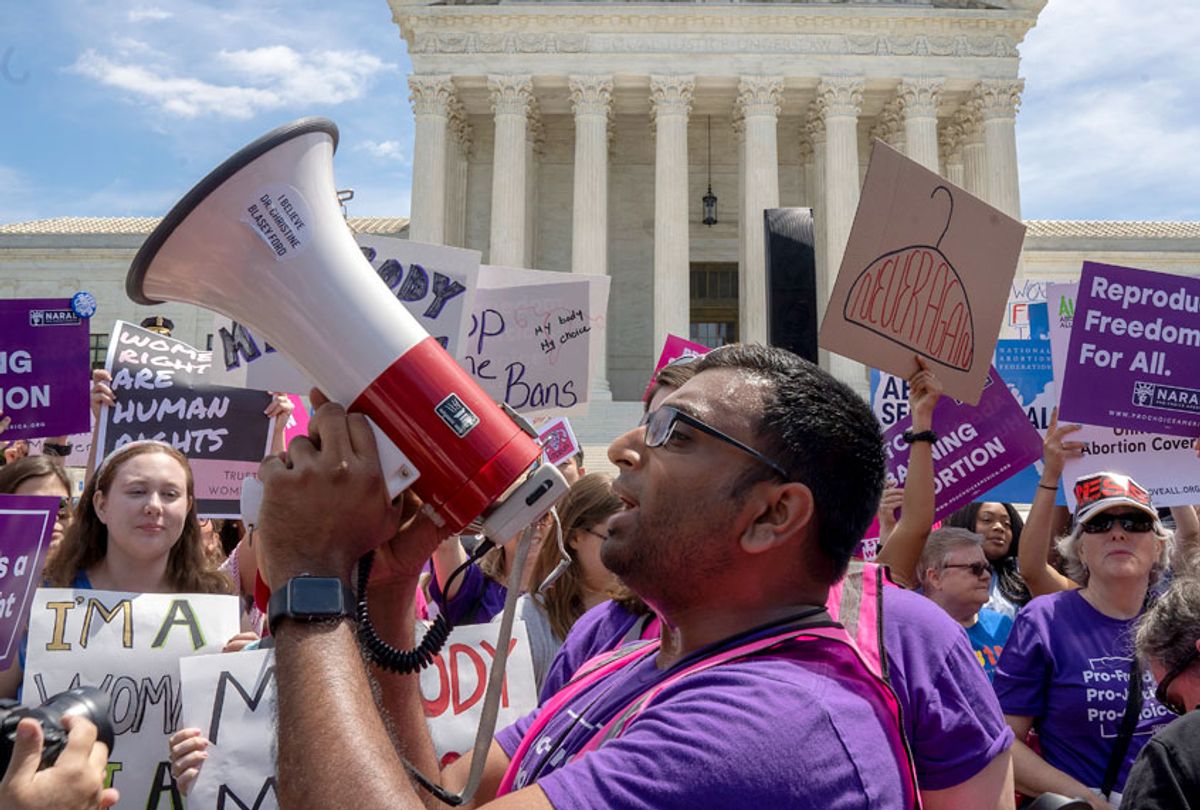 Pro-choice protesters gather at the Supreme Court on May 21, 2019 in Washington, DC. (Getty/Tasos Katopodis)
--

Last week we took a huge step in the wrong direction when Alabama Governor Kay Ivey signed a state law outlawing nearly all abortions, making the procedure a felony for doctors to perform and punishable by prison. There are no exceptions for rape or incest; abortion is only allowed if the woman's life is at serious risk.

"Today, I signed into law the Alabama Human Life Protection Act, a bill that was approved by overwhelming majorities in both chambers of the Legislature," Ivey, a Republican, said in a statement. "To the bill's many supporters, this legislation stands as a powerful testament to Alabamians' deeply held belief that every life is precious and that every life is a sacred gift from God."

Signing Alabama's bill into law makes Governor Ivey a hypocrite at the highest level — a so-called pro-life politician who has seen seven capital punishment executions in her tenure, the latest just the day after she signed the abortion ban. How does she square pro-life beliefs with state-run executions? As the New York Times reports, early in her term as governor Ivey characterized her office's responsibility to decide whether to intervene or not in capital cases as an unwelcome duty:

“How to proceed when faced with a potential execution is one of the most difficult decisions I will ever have to make as governor,” she said after one execution. “No governor covets the responsibility of weighing the merits of life or death; but it is a burden I accept as part of my pledge to uphold the laws of this state.”

And yet with the abortion ban, Ivey is proudly advocating for women to hand control of their bodies over to the state. This is terrifying. What’s scarier is that the final decision rested in the hands of a group of men, none of whom are capable, as far as we know, of becoming pregnant. Of the 27 white Republican men who hold office in the 35-seat Alabama Senate, 25 voted for the ban.

Alabama's new law follows five states — Georgia, Kentucky, Mississippi, Ohio and Missouri — that have passed so-called "heartbeat bills" this year. If the courts allow them to proceed, these laws would ban abortions after a fetal heartbeat can be detected, which happens before many women even realize they are pregnant, as early as six weeks. When Georgia Gov. Brian Kemp signed his state's heartbeat bill into law, film and TV productions began to withdraw from the state, a popular filming location due to its generous tax incentives, as many in Hollywood are calling for an outright entertainment industry boycott. (Former gubernatorial candidate Stacey Abrams is encouraging alternative action in protest.)

I don’t understand why men are still allowed to vote on women’s bodies, but if that is our unfortunate reality, we should be consistent with the practice of empowering the state to police bodily autonomy. What restrictions on the bodies of men do Alabama legislators have in the works?

Let's examine what it would look like if we applied the Alabama philosophy equally. Men who are accused of making inappropriate comments, inappropriate touching, and any kind of sexual assault including rape, would be forced to have vasectomies while they await trial. If they are found guilty, they would be required to have a huge “R” tattooed in the center of their foreheads and their genitals removed, in order for the state to ensure an honest attempt at keeping women safe. Sounds dangerous and absurd, right?

Crying about the need for small government and then voting to control the bodies of women — along with claiming to be pro-life while death row exists, while rejecting asylum-seekers and immigrants, supporting the Muslim ban, while knowing that torture is happening at the border and allowing it to proceed, while continuing to send young people off to die in wars — is also dangerous and absurd. Encouraging religious beliefs to lead policy in a country whose constitution guarantees freedom of religious expression and freedom from state-imposed religion is, too.

Cisgender men shouldn’t be able to debate on, speak about, or have any say regarding anti-abortion laws because they cannot get pregnant. Yes, we all understand that it takes two to procreate — but it’s clear that the person with the uterus does all of the physical labor in that arrangement, sacrificing their health, their bodies, and even their lives. Men just contribute sperm, which is free and available everywhere. You can literally find sperm without even really looking for it. Asking a person to carry a child to term is a much more difficult and complex process. And when men can’t cut it as fathers, for many of them it is easy to pack up and leave. Did the Alabama senators consider the number of single mothers out here raising kids on their own?

Many conservatives clearly think abortions are only for lusty, careless women who don’t care about life.  It shouldn't matter what they think. It shouldn't be up to them to judge the character of anyone — what a woman wants to do with her body, whether she's lusty or a virgin or a lusty virgin or whatever, is her business, not ours. We shouldn't have to even draw distinctions for incest and rape. What women want to do with their bodies is their business and that’s it, there's nothing else to talk about.

Conservatives say and act as if they are advocating for unborn children. They aren’t. Rather they are forcing people to carry pregnancies to term and to give birth against their will, and that is dangerous and hypocritical, as there are no comparable consequences for men. In Alabama, State Sen. Vivian Figures, a Democrat from Mobile, introduced a new bill on Tuesday to repeal the state's new abortion ban. According to a statement released by the Alabama Senate Minority Caucus, "Since the passing of the bill, Alabama lawmakers have been inundated with calls from people nationwide expressing their concern that the bill goes too far." If men are calling lawmakers to protest this new law — and not only in Alabama, but in the "heartbeat bill" states as well — keep it up.  As a man, I think it's important for other men to step up and be as vocal in attacking this problem as women have been, because no one should be able to rest when freedoms are clearly being stripped away.