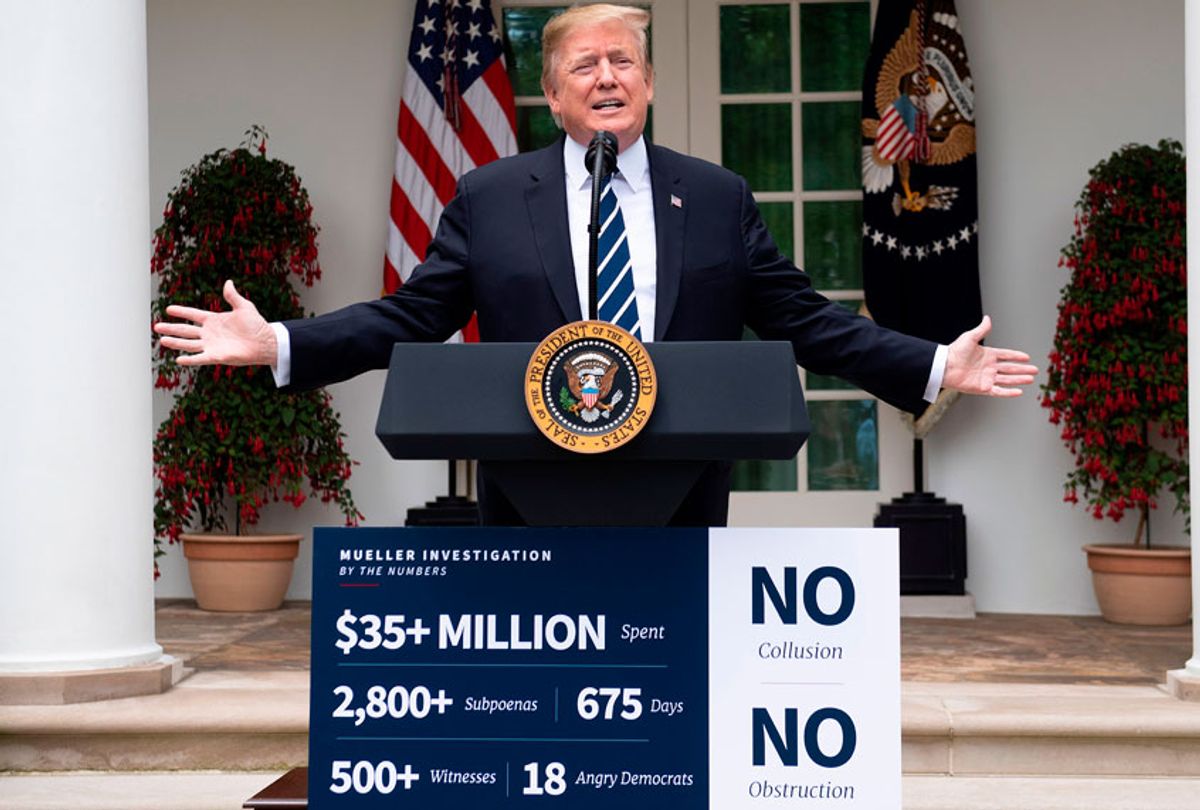 President Donald Trump speaks in the Rose Garden of the White House on May 22, 2019, in Washington, DC. (Getty/Jim Watson)
--

During his Wednesday, May 22 press conference in the White House rose garden, President Donald Trump spent a lot of time attacking Democrats for their response to special counsel Robert Mueller’s Russia investigation — stressing that he refuses to work with Democrats on infrastructure bills as long as multiple investigations of him continue in Congress. But one part of the press conference that hasn’t receive as much attention is Trump’s reference to the controversial June 9, 2016 Trump Tower meeting discussed his Mueller’s report.

Alex Thomas, in an article for the IJR Blue website, notes that during the press conference, Trump “suggested that an opposition research firm was behind the Trump Tower meeting.” And the president, Thomas points out, told reporters that his son Donald Trump, Jr. “called me, and he had the meeting after.”

Thomas goes on to describe the president’s statement as “just another revelation in the long string of disclosures about that meeting,” recalling that “at first, President Trump told Reuters that he didn’t know about the meeting until the New York Times broke a story on it.” Thomas reports in his article that the press conference marked “the first time that the president said that he talked to Donald Trump, Jr. before he went into” the June 9, 2016 meeting.

President Trump himself did not attend that Trump Tower meeting three years ago. In addition to Donald Trump Jr., those in attendance included Trump campaign manager Paul Manafort (who has been convicted of multiple felonies in federal court), Jared Kushner (Trump’s son-in-law) and Russian attorney Natalia Veselnitskaya. Trump Jr. and others attended the meeting in the hope of getting some dirt on Democratic presidential candidate Hillary Clinton.

Michael Cohen, Trump’s former personal attorney, has alleged that the president knew about the June 9, 2016 meeting in advance.

Mueller’s report makes it clear that Russian government officials went to great lengths to interference in the 2016 presidential election. Nonetheless, Mueller concluded that the Trump campaign’s interactions with Russians did not rise to the level of a full-fledged criminal conspiracy.