Desperately trying to change the subject from impeachment, Trump stages another episode of "Chuck and Nancy" 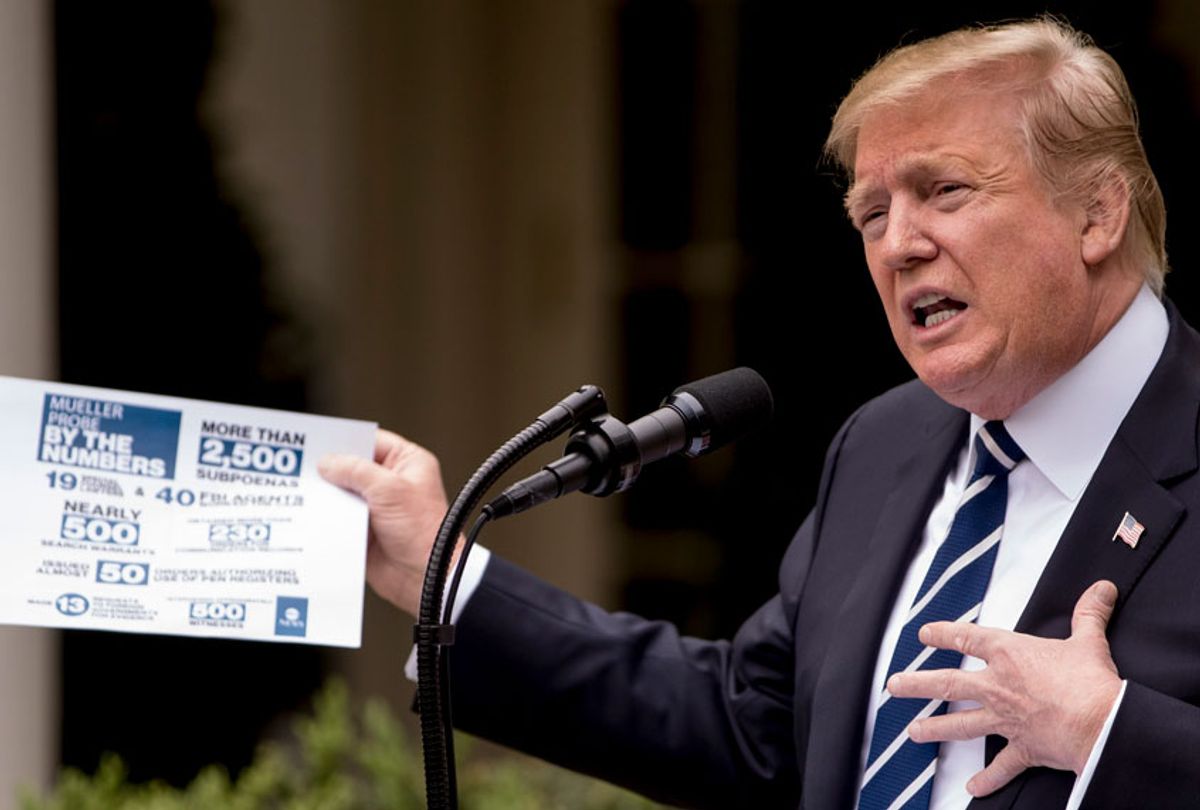 President Donald Trump holds up a stat sheet having to do with the Mueller Report as he speaks in the Rose Garden at the White House in Washington, Wednesday, May 22, 2019. (AP/Andrew Harnik)
--

The day after Republicans lost control of the House of Representatives following last fall’s midterm elections, President Trump took to both Twitter and a podium at the White House to warn Democrats not to investigate his administration or else he would use the power of the presidency to stop any new federal legislation.

“If that happens,” Trump said of Democratic investigations leading to subpoenas for members of his administration, “then we’re going to do the same thing, and government comes to a halt. And I would blame them.”

On Wednesday, Trump made good on his threat.

Triggered by growing calls for his impeachment, the president stormed out of a planned White House meeting with congressional Democratic leaders on a bipartisan plan to improve the nation’s crumbling infrastructure.

As Trump described it: “I walked into the room and I told Senator Schumer, Speaker Pelosi: ‘I want to do infrastructure. I want to do it more than you want to do it. I’d be really good at that, that’s what I do. But you know what? You can’t do it under these circumstances. So get these phony investigations over with.”

The president is trying to use his proposed (and entirely hypothetical) $2 trillion infrastructure deal as a bargaining chip to get Democrats to stop their oversight of his presidency. In effect, he is trying to blackmail the nation, allowing communities that need roads replaced, bridges fixed, broadband access and lead-free pipes to suffer until congressional investigations into his administration are halted. It is the clearest form of extortion Trump has exhibited since taking office. But beyond the galling selfishness of these antics, they hurt his own party more than his political opponents.

“To watch what happened in the White House would make your jaw drop,” Senate Minority Leader Chuck Schumer told reporters, minutes after Trump stormed out of their brief encounter. “We went to the White House to talk to President Trump about infrastructure, but he threw a temper tantrum and walked out of the meeting.”

As Schumer pointed out, “It’s clear this was not a spontaneous move on the president’s part. It was planned.” There were pre-printed signs for Trump’s “impromptu” Rose Garden address blasting Democrats. Two hours earlier, White House press secretary Sarah Huckabee Sanders had claimed the White House wanted to see Trump’s replacement NAFTA deal passed first, before claiming Democrats have no infrastructure plan of their own. But Schumer said Democrats came to the White House on Wednesday “prepared to give [Trump] a 35-page plan detailing ... all the areas I mentioned and more that had the broad support of Senate and House Democrats.”

Trump's stunt was calculated to goad Democrats into an uncomfortable and ultimately untenable position. For weeks, the media has repeated the familiar "Democrats in disarray" frame to paint House Speaker Nancy Pelosi, as out of control, atop an increasingly impatient caucus hellbent on impeachment. After Pelosi accused Trump of engaging in a “cover-up” on Wednesday, noting his blockade of congressional investigations, the president attempted to deflect onto her the lack of progress on an issue he has long claimed to care about intensely. But as Trump continues to dodge House investigations, leaving lawmakers spinning their wheels, they aren’t falling for his trap.

Instead, Democrats are calling Trump's bluff over his feigned outrage about Pelosi’s comments, pointing to his incessant tweeting attacks on Democrats every single day. Sen. Debbie Stabenow, D-Mich., taunted Trump by saying that he felt intimidated by Pelosi: “I don’t think he does well with smart, strong women.”

A growing number of congressional Democrats, most notably moderate members of the rank and file, have publicly announced their support for impeachment. Rep. Abigail Spanberger, who ousted GOP Rep. Dave Brat last fall in a Virginia district that Trump carried by seven points, said the prevailing wisdom that Democrats in swing districts fear impeachment proceedings is incorrect. “I generally reject the notion that, like, districts like mine don't believe in the rule of law and constitutional values,” Spanberger told Roll Call.

Rep. Katie Hill, a freshman Democrat who flipped a Southern California seat last fall and has been slow to embrace impeachment, made a full-throated argument in favor of the move after Trump’s stunt on Wednesday.

Whether or not they impeach, Democrats are committed to investigating and legislating at the same time. While the impeachment versus infrastructure drama was playing out at the White House on Wednesday, the House Judiciary Committee passed the Dream Act, a bill to provide permanent protection and a pathway to citizenship for undocumented immigrants brought to the U.S. as children.

While the bill is unlikely ever to make it to the president's desk, this movement on immigration for Democrats comes exactly one week after Trump was in the White House Rose Garden to reveal his own so-called immigration plan — which, like his infrastructure plan, was declared dead on arrival by Republicans in Congress.

Vulnerable Republicans up for re-election in swing states next year understand that they still have an entire must-do list to accomplish this year, investigations or not. Still to come this year includes a host of important work that requires bipartisan support: avoiding an automatic sequester of the Pentagon’s budget, a debt ceiling hike, and a disaster relief bill to aid flooded military installations and farms in the key electoral states of Florida, North Carolina and Iowa. As even the White House admits, Trump’s new trade treaty is a top priority this year. But as the president threatened months ago, nothing gets done if he isn’t left unaccountable. As he has made loud and clear, he puts the personal over party and patriotism.

Republicans, for their part, appeared jolted by Trump’s move. Sen. John Kennedy of Louisiana took to the floor on Wednesday to blast the GOP-led Senate for failing to accomplish anything legislatively so far this session.

"We need to do more, by we I mean the United States Congress," he said. "Other than the nominations, which are important, we have done nothing. Zero. Zilch. Nada." He said that “there are issues where our Democratic friends and my Republican friends have more in common than we don't. We need to bring the bills to the floor of the United States Senate."

Whether under threat of impeachment or just continued investigation, it is clear that Democrats have Trump rattled — and that hurts congressional Republicans the most. The Republican Senate is where House Democratic bills go to die. Despite Trump's claims to the contrary, it is Republican intransigence, not Democratic efforts to investigate the executive branch, that have obstructed progress. As Sen. John Cornyn of Texas proudly stated last month: “We are the firewall.”