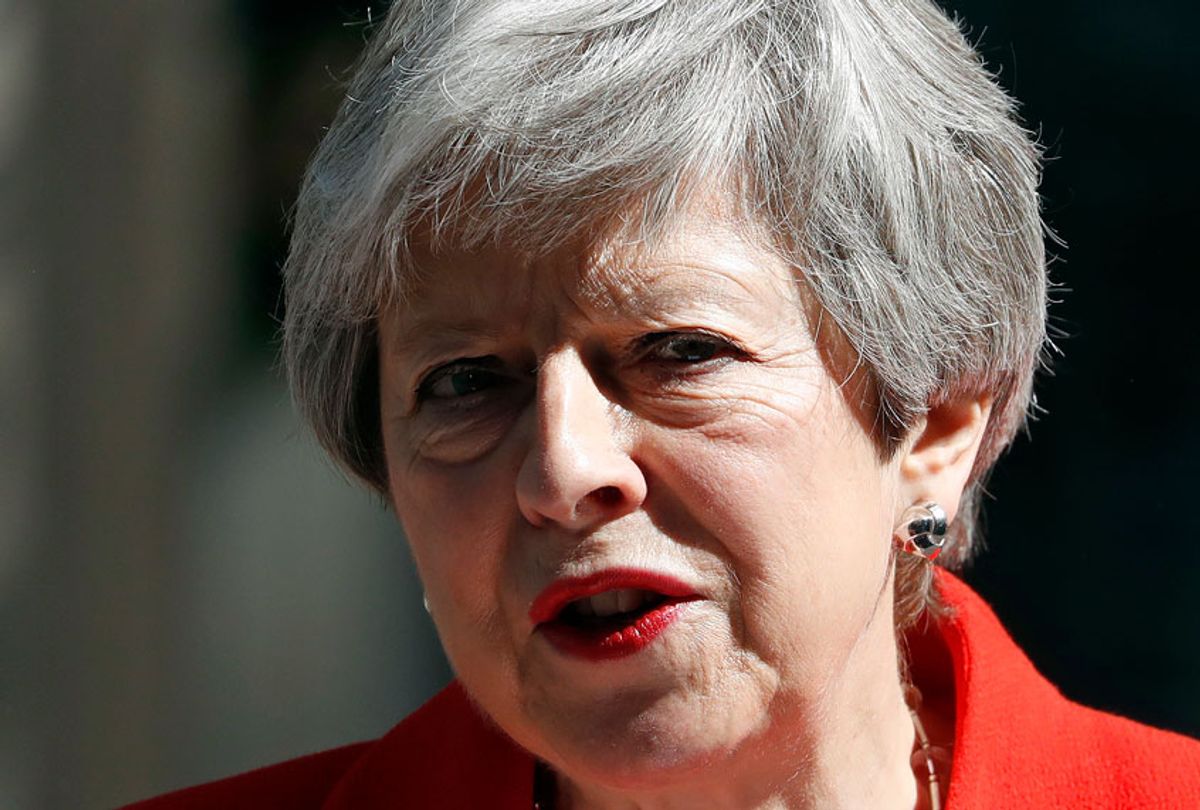 Prime Minister Theresa May makes a statement outside 10 Downing Street on May 24, 2019 in London, England. The prime minister has announced that she will resign on Friday, June 7, 2019. (AP/Alastair Grant)
--

Theresa May, the embattled prime minister of the United Kingdom, announced Friday that she would step down as leader of her Conservative Party and as Britain's prime minister after repeatedly failing to win Parliament's approval for a deal to withdraw the country from the European Union.

In an emotional address, May said being prime minister had been the "honor of my life."

The politician asserted that she had done "everything I can" to deliver a Brexit plan, but it was now "in the best interests of the country for a new prime minister to lead that effort."

"I feel as certain today as I did three years ago that in a democracy, if you give people a choice you have a duty to implement what they decide. I have done my best to do that," she added. "I have done everything I can to convince MPs [Members of Parliament] to back that deal. Sadly, I have not been able to do so."

May will resign June 7, paving the way for a contest to choose a new prime minister. The process to replace her will begin the following week, with May serving as prime minister until the contest is complete.

In order to deliver Brexit, May's successor would need to build agreement in Parliament, she said.

"Such a compromise can only be reached if those on all sides of the debate are willing to compromise," she said.

The Conservative Party chairman, Brandon Lewis, said in a statement Friday that lawmakers would begin voting on May's successor on June 10, and that the new leader would be chosen before Parliament's summer break, which usually begins in late June.

May's voice appeared to crack as she concluded her speech, saying, "I will shortly leave the job that it has been the honor of my life to hold."

"The second female prime minister, but certainly not the last," she continued. "I do so with no ill will but with enormous and enduring gratitude to have had the opportunity to serve the country I love."

"She's now accepted what the country's known for months: she can't govern, and nor can her divided and disintegrating party," he added on Twitter. "Whoever becomes the new Tory leader must let the people decide our country’s future, through an immediate General Election."

A series of conservative parliament members praised May following her statement.

Chancellor Philip Hammond said it had been a "privilege" to serve alongside her.

Nicola Sturgeon, Scotland's first minister and leader of the Scottish National Party, wished May well despite "profound disagreements," including on Brexit, but added on Twitter that "the prospect of an even more hardline Brexiteer now becoming PM and threatening a no-deal exit is deeply concerning."

"Added to the experience of the past three years, this makes it all the more important that Scotland is given the choice of becoming an independent country," she continued.