Smart Watch: Ebola drama "The Hot Zone" has all the symptoms of a classic miniseries 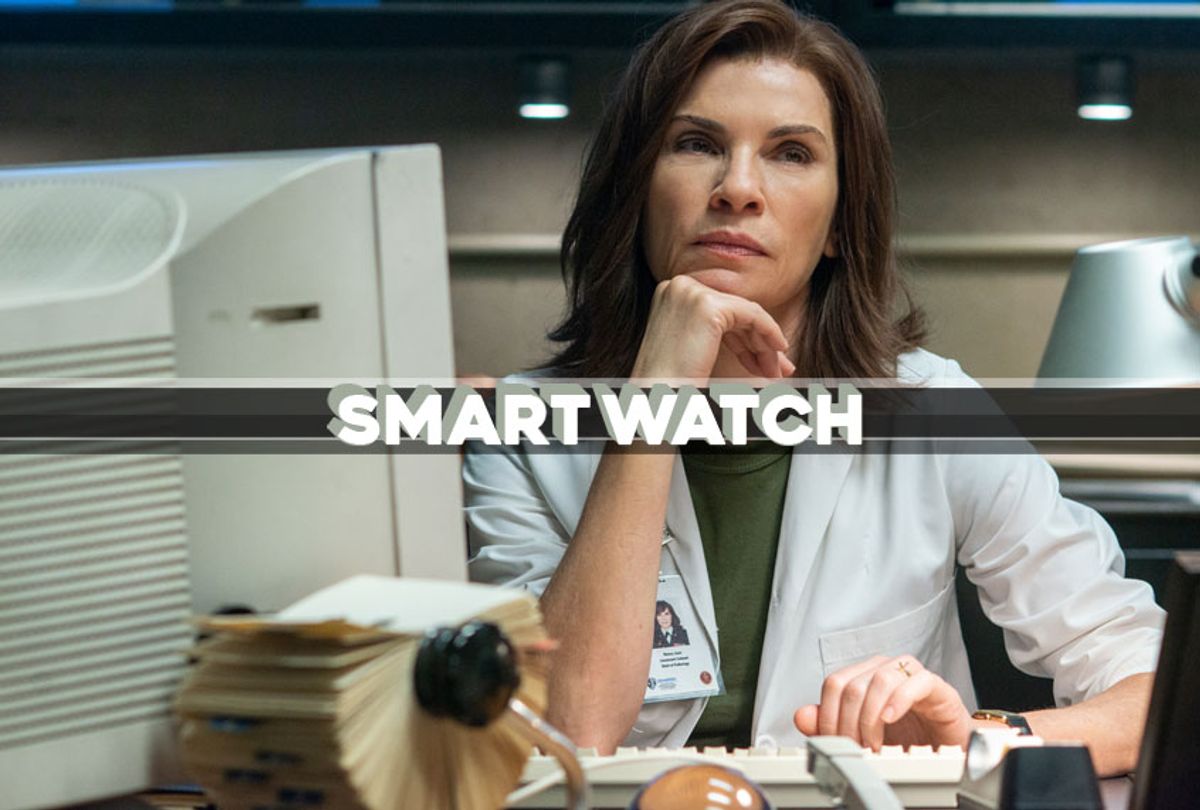 Way back in ancient times — we’re talking, like, the ‘70s and ‘80s — miniseries were much-beloved television events. However, they were not event series or limited series, although honestly, its tough to delineate the differences between those two terms, particularly since limited series such as “Big Little Lies” sometimes turn out not to be so limited if they become full-blown cultural sensations. (The “anthology series” designation, meanwhile is clearer and an entirely different shtick.)

Classic miniseries were gloriously bombastic in-between entertainments — not long enough to be full series, too lengthy to be called movies — that attracted millions of eyeballs during fallow periods in the TV cycle. Sometimes, as was the case with “Roots,” they made history.

Industry changes and the rise of the TV drama's golden age on cable diminished the miniseries’ appeal in the ‘90s, and these days it feels like the term itself has an antique-shop stench about it. Even the venerable Emmys refers to whatever we're kinda sorta talking about here are as a "limited series."

This is probably why National Geographic describes “The Hot Zone,” a six episodes-and-out thriller, as a limited series. To people who know, however, this thing moves, looks and sounds like a good old-fashioned summertime miniseries.

Not that there’s anything wrong with that! Quite the opposite: by zipping itself into that suit, “The Hot Zone” fully embraces the scientific thriller aspects of Richard Preston’s 1994 non-fiction bestseller. This being a NatGeo product, the science is presumably the point.

Since we’re splitting hairs on the differences between a miniseries and a limited series, it may be interesting to contrast “The Hot Zone” with HBO’s “Chernobyl,” a true limited series based on the true story of another massively deadly disaster, this one man-made.  But the dramatic thrust of "Chernobyl" has less to do with the disaster itself than the Soviet leadership's thoughtless and cruel deceit, entirely driven by ego. Portraying men more concerned with how the disaster would make them look than with aiding their own citizens and preventing the contamination of other Europe countries grants its actors far more dramatic territory to explore, because its men and women are the story.

Whereas “The Hot Zone” is a frantic race to contain an invisible biological foe so lethal that American leaders simply cannot belief such a pathogen would turn up here.

“The Hot Zone” is based on the 1989 appearance of a deadly strain of Ebola on American soil at a scientific facility located in Virginia, just outside of Washington D.C. The mini — sorry, limited —series more or less follows the book's chronology, starting with a look at the last moments of a man who starts sweating and vomiting seconds after he comes into frame.  Word to the wise: eat your evening meal well before tucking in to this series.

As one of his final acts, he spews blood all over a young physician at a Nairobi hospital who handily provides some key antibodies that enable the ability to test and identify deadly filoviruses, such as Ebola, known for being highly infectious and nearly possible to cure. Basically, then, “The Hot Zone” is a scientific horror story and in the way of all gripping tales of terror, the monster is the star while everything else secondary.

This places Julianna Margulies primarily in the role of a frustrated woman, Lt. Col. Nancy Jaax ,  pushing back against male colleagues who aren’t inclined believe her warnings about what she’s seeing under her microscope. The script allows Margulies to convey the muted, nose-flaring frustration that comes with being a top figure at U.S. Army’s main facility for researching biological warfare countermeasures, yet fated to be consistently doubted in part because she’s a woman. Very early on she recruits a young male medical officer to assist her, and he jokes about being escorted to Col. Jaax. When she corrects the man, who is suitable horrified, Margulies quietly ripples the air in the room with her character's irritation.

The worst offender, at least at first, is Topher Grace’s wonderfully aggravating as smug Ph.D. Peter Jahrling, an over-compensating know-it-all who initially brushes off Jaax’s findings, cavalierly sniffing lab samples as if he’s a perfumer and inviting his colleague Ben Gellis (Paul James) to do the same. As it dawns on him that his colleague who he original brushes off might be right, his scenes take on a distinct trepidation that shades every interaction.

Having established that Margulies does a fine job leading “The Hot Zone,” neither she nor her impressive list of co-stars, including Liam Cunningham, Noah Emmerich and James D’Arcy, are given many opportunities to chew scenery. They don’t need to, because showrunners and executive producers Kelly Sounders and Brian Peterson built the script to make fear of infection the centerpiece.

A scene of Grace’s Jahrling drinking in a bar, for example, morphs into a distinctly sinister pass, and we see the paranoia whirring in his brain as he calculates how easily a virus could spread ( if he indeed has it) via something as a simple as a diligent server clearing his glass.

In airing its six episodes over three nights, “The Hot Zone” blasts through to its finale efficiently enough to prevent viewers from falling away. And as I mentioned above, airing at 9 p.m. it also ensures that the majority of people have already eaten.

Take that as a warning that the weak stomached need not apply, and if you have any doubts, you’ll know whether you can handle this series straightaway since the vomiting and spewed bodily fluids kick in within minutes of the series opener. It’s quite the event, and exactly the type of classic shock that lets you what kind of entertainment you’re in for.

“She’s Gotta Have It,” second season currently airing on Netflix

A popular debate topic among TV viewers is whether certain series, limited or not, should go on beyond a near perfect season capped with an exemplary ending.  “13 Reasons Why” was best as a one-and-done endeavor. We won't know whether "Big Little Lies," originally written as a single-season adaptation of Liane Moriarty's novel, requires a sequel until a few weeks from now when season 2 debuts.

Prior to Netflix announcing its second season pickup of Spike Lee’s series adaptation of his career-launching 1986 film, few would have quibbled with the merits of granting "She's Gotta Have It" another nine episodes. Season 1 explodes with music, color and extraordinary performances.

After watching the premiere of the new season, though, I caught a small case of doubt. Just a wee one.

“She’s Gotta Have It” remains as visually stunning as it has always been, and DeWanda Wise is still a vision as Nola Darling. Those elements alone make it worth consuming, albeit more slowly than I gorged on season 1.

This series’ fortitude as an artistic work rests as much in its visual presentation and Lee’s idiosyncratic editing choices; for instance, he uplifts the music playing behind key scenes as prominently as the action taking place within. Aesthetically speaking, “She’s Gotta Have It” has few peers.

The enlarged presence of Mars in the second season’s opening episode feels distracting, as if Lee viewed a second season pick-up as a blessing to add more of everything. More music is wonderful; more of Nola’s free-spirited dithering, equally charming and vexing, is expected. But leading with Mars initially feels like too much cowbell on the track. Ramos is excellent, don’t get me wrong. But he’s a whole lot of excellent, and unless you’re in love with the character, you will be reminded of the meaning behind “fine in small doses.”

There’s too much life, color, beauty and music in “She’s Gotta Have It” for any solo annoyance to completely detract from the pleasure it gives, and it’s still worth your time, if not necessarily by way of a speedy consumption.

Part of me misses the classic “Archer” episodes, with Sterling Archer (H. Jon Benjamin) acing and botching his way through super-spy adventures with his field partner and on again/off again lover Lana Kane (Aisha Tyler), his prickly mother Malory (Jessica Walter) and everyone else in the gang formerly working for ISIS.

A mission gone sideways felled the hero at the end of season 7, and he’s been in a coma ever since, dreaming of adventures set in different genres cinematic. The noir “Dreamland” season, though beautifully drawn, is more somber than the colorful “Archer: Danger Island.” Each had their charms, but neither could match the original's level of humor.

But “1999” comes pretty close. Of course, whether anyone loves these sojourns into classic styles of cinematic storytelling is greatly dependent on how much you love the entertainment genres upon which Archer’s coma dreams are based. I’m betting “1999” has a broader appeal, though, given its thematic mash-up of every blockbuster space adventure you can think of beginning with direct homages to  “Alien” and “2001: A Space Odyssey.”

Given Ray Gillette’s (Adam Reed) penchant for dressing as a space geisha, clearly there’s some affection for “Firefly” in there as well, which matters as much as, well, it doesn’t. These are still the same characters we've laughed with dressed in other people’s movie clothes, save for Pam Poovey (Amber Nash), who is literally built like a rock in this 10th season. This just goes to prove that the best TV delights can put on any old clothing; as long as they remain true to the core of what makes us adore them, we’ll keep our eyes on them.