What does Memorial Day mean to a country where one percent serve? 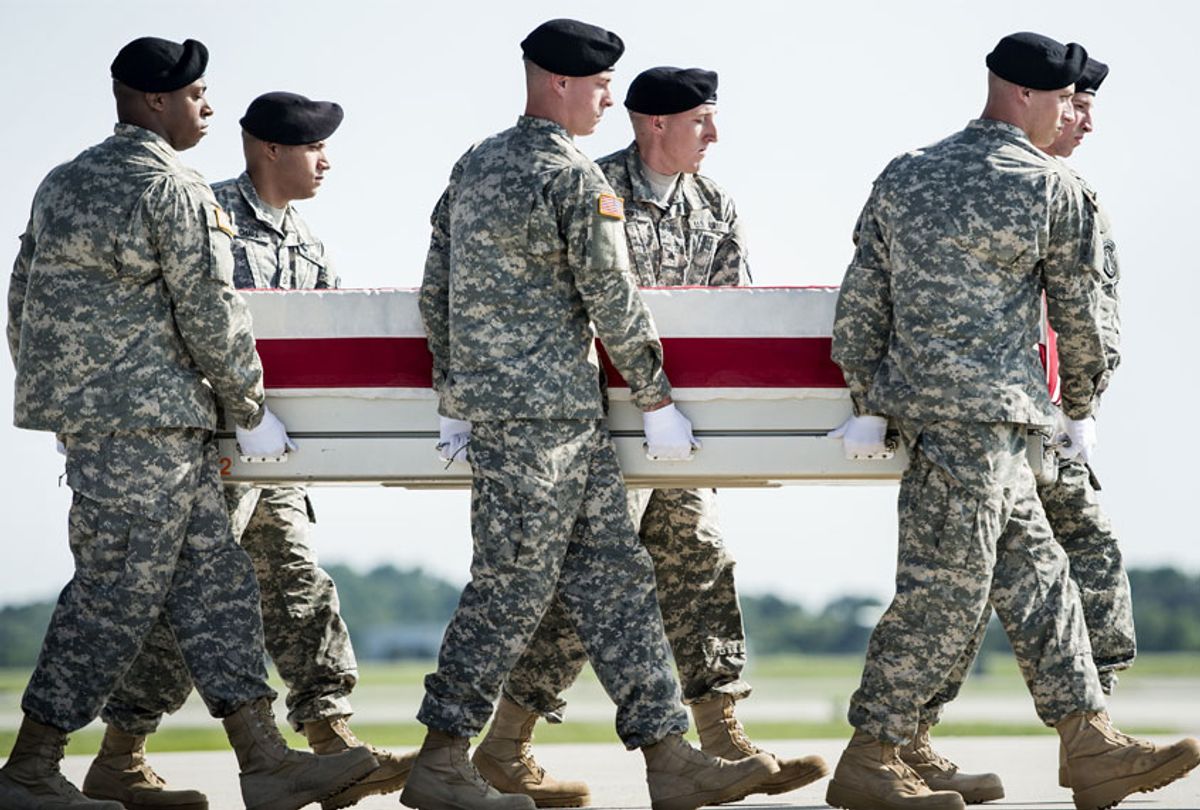 A US Army carry team moves a transfer case with the remains of US Army Maj. Gen. Harold J. Greene from a C-17 cargo plane during a dignified transfer at Dover Air Force Base August 7, 2014 in Delaware. (Getty/Brendan SMIALOWSKI)
--

Since the late 1860s it has been our national custom to set aside one day of the year, Memorial Day, to honor soldiers whose lives were sacrificed on behalf of our country. Yet, the rest of the year as a nation, we largely ignore the grinding daily sacrifice of the soldiers that are living.

And with the introduction of the all-volunteer military over 40 years ago that’s been increasingly easier to do since military service became a “voluntary” choice often driven by the most predatory aspects of late stage vulture capitalism that feasted off the profits generated by the collapse of wages that coincidentally happened right around the same time.

It was President Richard Nixon, who had prosecuted the Vietnam War he was elected to end, who signed off on the shift after a commission he set up to study the issue recommended it.

No doubt, Nixon experienced first-hand the blowback from trying to enforce universal military conscription to fight an unpopular war. If you eliminated that coercive aspect of overseas warfighting American policymakers would have a freer hand to wage was in whatever country they had in their geopolitical crosshairs for as long as they wanted

If you could eliminate that mandatory civic obligation hokum you could shift that obligation to the lower economic strata of society and market it as a “golden opportunity” wrapped in camo.

Afterall, it was the universal nature of the draft during Vietnam that required everyone to pay attention.

Resistance to the Vietnam War cut across classes because everyone’s son was at risk of being shipped off, with the exception of the Donald Trump types. As Daniel S. Levy recalled, even Paine, Webber, Jackson & Curtis, a Wall Street brokerage firm, joined in the resistance fray running an ad proclaiming that ending the war in Vietnam would be “the most bullish thing that could happen to the stock market.”

At places like Columbia University and Harvard, even the children of the elites put something at risk to oppose the war.

In the years since the institution of the all-voluntary military what’s developed is a kind of socio-economic draft that relies on drawing recruits from places that have been most victimized by neo-liberal capitalism’s free trade that hallowed out so much of our country.

We now have the military that matches our 21st century feudal society that increasingly resembles the socio-economic structure of Westeros in the Game of Thrones.

“Today, more than 300 million Americans lay claim to rights, liberties and security and that not a single one of them is obligated to protect and defend,” wrote Dennis Laich and Lawrence Wilkerson in the American Conservative. “Apparently, only 1 percent of the population feels that obligation. The 1 percent is bleeding and dying for the other 99 percent.”

And as the authors point out the 1 percent that opts to serve don’t come from “the families of the Ivy Leagues, of Wall Street, of corporate board rooms, from the Congress, or from affluent America; it comes from less well-to-do areas; West Virginia, Maine, Pennsylvania, Oklahoma, Arkansas, Mississippi, Alabama and elsewhere.”

In addition to shifting the responsibility for defending the nation away from the wealthiest families, the shift to being voluntary meant that the average length of a military career had to be longer and that post 9/11 we pressed our National Guard into an overseas combat role not seen since the Second World War.

Scroll forward to October of 2017 when four American soldiers were killed in combat in Niger and even U.S. Senators admitted they were clueless as to the fact that we had soldiers in that country.

Senator Bob Casey admitted on CNN he did not know about the deployment. “I think there’s a lot of work that both parties and both branches of government need to do,” he said. “Not only to stay more informed but to focus on why we’re there and what happened to get to the bottom of this.”

I saw evidence of this kind of dereliction of duty by our elected leaders in 2004 when I covered a National Guard pancake breakfast at their Armory in Westfield, New Jersey for WNYC.

The whole town had converged on the National Guard Armory to flip, serve and eat pancakes all to raise money for the families of National Guard members bound for Iraq. At that point 65 percent of the total Army National Guard was mobilized in the biggest deployment since World War II.

At $6 a plate the pancake breakfast cleared $17,000 dollars. And all of it was needed to keep the lights on and the mortgage current in the homes of some weekend warriors turned full-time combat soldiers.

New Jersey National Guard General Glenn Reith told me at the time for one in five Guard families’ activation meant real economic hardship. “Perhaps the biggest challenge is the fact that if you are on active duty you have a Federal installation where all your needs and cares are taken care of,” he said. “Our families are out in all the communities and because of that they don’t have the same structure to support them on a day-to-day basis.”

At that point New Jersey had lost 32 residents in combat.

A wife of a long time National Guardsmen ready for deployment told me her household was already subsidizing a war effort she thought was misguided and poorly planned. She did not want me to use her name.

“I know that my husband has needed many things and has had to purchase them himself meaning binoculars that they were told they should have and he called me up and asked me to look them up on the internet,” she said. “They were $700 binoculars that he had to purchase himself. He called me up another day and said I need you to look up a site on the internet. I pulled it up and it was a site for scopes for machine guns. I said, ‘you got to be kidding me.’ I said this is something you need and we have to purchase it. It was an item between $1,000 and $2,000, that’s a lot of pancakes.”

But for this courageous wife and mother economics was the least of it.

“Every single day I have to deal with kids crying that they don’t want to go to school. I have straight-A student coming home saying I can’t deal with school I can’t think . . . . Why does Daddy have to go back?”