No, Mr. President: China didn't steal our jobs. Corporate America gave them away 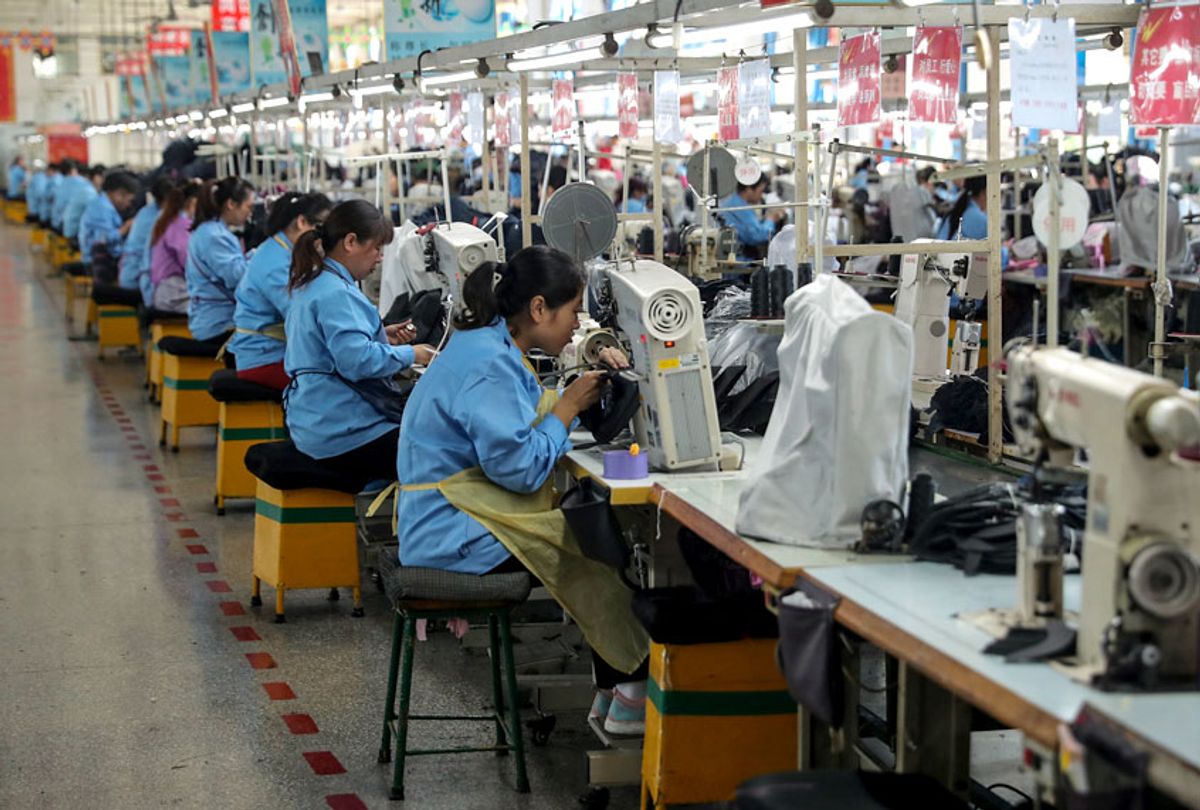 This photo taken on October 17, 2018 shows workers sewing shoes at a factory in Qingdao in China's eastern Shandong province (STR/AFP/Getty)
--

China is not “stealing” American jobs.

President Trump loves to blame China for the job losses that have devastated American workers under globalization. But the truth is that Trump is blaming the wrong party. Trump’s reckless trade war against China is misguided and amounts to a colossal charade that will not solve the actual problem.

Yes, it is true that numerous American manufacturing jobs have been shipped overseas to China, thereby leaving American workers jobless and suffering. But China did not steal these jobs.

No. These jobs were given to China. It was all legal and legitimate. China merely accepted the gift.

What would anyone expect China to do? Accepting these jobs was a perfectly rational course of action.

China was an underdeveloped nation with a large population of poor people willing to work for a fraction of the hourly wages of American workers. And then corporations came along and presented China with an attractive offer: We would like to build manufacturing plants in China and hire droves of your unemployed people to work there. What was China supposed to do? Naturally, China said yes.

This is hardly stealing.

China is supposed to look out for itself and for its own workers, not for American workers. Thus it was perfectly proper for China to allow the manufacturing plants to be built in China and employ Chinese workers. China did not steal these jobs.

So if China is not at fault, then who is to blame for the devastation caused to American workers?

The answer is plain to see, and it lies within our own shores. The fault belongs squarely with corporate America.

And who profited from the destruction to American workers? It was the wealthy executives and shareholders of American corporations. They earned millions of dollars for themselves by cutting the costs of their workforce.

This is part of the larger trend of economic inequality that is eroding the entire middle class in America. Wealth is being shifted away from the workers down below and transferred up into the hands of the wealthy executives and shareholders at the top.

Trump blaming China is nonsense. China is not at fault. To be sure, China is hardly an angel and indeed engages in improper trade practices. But even if China agreed to whatever bone-headed demands Trump is seeking, the problem still would not be solved. The truth is that America cannot possibly compete against China on labor costs. The standard of living is much lower in China and thus Chinese workers are willing to accept wages far below living wages in America. So corporate America will continue to transfer more and more jobs to China and elsewhere. If we do not address this fundamental economic reality, then we will never solve the problem.

Trump blaming China has an insidious aspect to it as well. Focusing all the ire upon China is a grand misdirection that conceals the true culprit, namely, the super-rich corporate executives and shareholders in America.

This is part of Trump’s standard playbook. Trump falsely proclaims to be fighting for blue-collar workers, when in truth, Trump acts entirely in favor of the rich at the top.

Surprisingly, this seems to work. Some of the hard-working Americans who are being crushed by Trump’s idiotic trade war and who should be denouncing Trump, nonetheless praise him for standing up to China, believing that Trump is fighting for blue-collar jobs. It is painful to witness such good people falling victim to Trump’s despicable con job.

In order to actually save the middle class, we need to focus on the true cause of the problem. We must direct our great powers of reform where they belong — upon the wealthy executives and shareholders of corporate America who caused this problem in the first place.

So the financial incentives must be reconfigured. If corporate America is going to ship American jobs overseas, it must not be permitted to pocket all the profits themselves and leave their displaced workers with nothing. Instead, corporations that send jobs offshore must be required to sufficiently compensate their displaced American workers. Executives and shareholders must not be permitted to enrich themselves unless and until their workers are financially secure.

Our society must favor people over profits, not profits over people.