A new report reveals Navy pilots claim to have seen UFOs... although this doesn't mean they're extraterrestrials 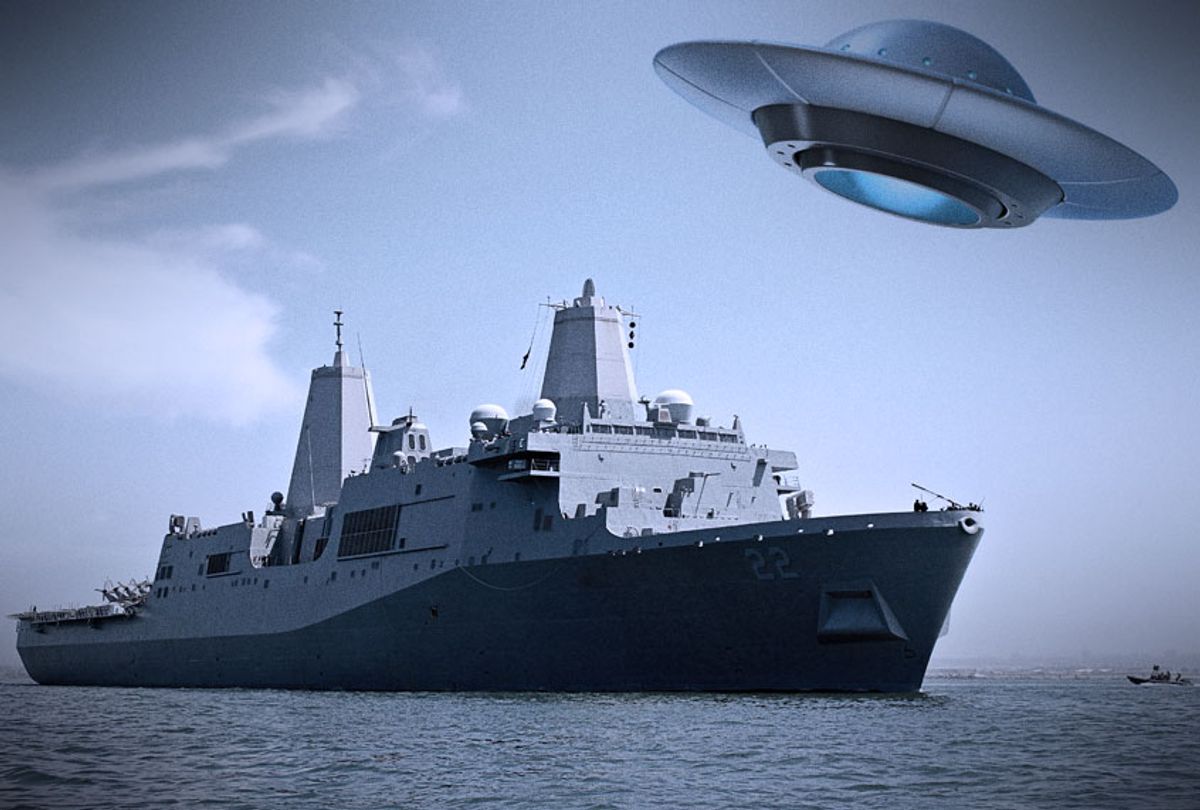 Five Navy pilots saw unidentified flying objects, or UFOs, in 2014 and 2015 during training maneuvers off the aircraft carrier Theodore Roosevelt, according to a new report.

Described as "objects [that] had no visible engine or infrared exhaust plumes" with "one of them like a spinning top moving against the wind," the Navy pilots did not directly assert a belief that the UFOs were of extraterrestrial origin. However, they also could not identify what they were looking at, according to The New York Times.

The UFOs were later described in the article as "showing up at 30,000 feet, 20,000 feet, even sea level. They could accelerate, slow down and then hit hypersonic speeds." A pilot described one as "a sphere encasing a cube." A video purportedly "showed objects accelerating to hypersonic speed, making sudden stops and instantaneous turns — something beyond the physical limits of a human crew."

The Times' article includes some colorful anecdotes, which summarize the thrust of the story.

"These things would be out there all day,” said Lt. Ryan Graves, an F/A-18 Super Hornet pilot, who has been with the Navy for 10 years and who reported his sightings to the Pentagon and Congress. "Keeping an aircraft in the air requires a significant amount of energy. With the speeds we observed, 12 hours in the air is 11 hours longer than we’d expect.”

It appears the incident did catch the attention of the type of Department of Defense agency one might expect to see in a science fiction movie.

The sightings were reported to the Pentagon’s shadowy, little-known Advanced Aerospace Threat Identification Program, which analyzed the radar data, video footage and accounts provided by senior officers from the Roosevelt. Luis Elizondo, a military intelligence official who ran the program until he resigned in 2017, called the sightings "a striking series of incidents.”

One of the pilots who claims to have seen the UFOs insists he still has not come up with an explanation for what he witnessed.

Lieutenant Graves still cannot explain what he saw. In the summer of 2014, he and Lt. Danny Accoin, another Super Hornet pilot, were part of a squadron, the VFA-11 "Red Rippers” out of Naval Air Station Oceana, Va., that was training for a deployment to the Persian Gulf.

Another Navy officer described his own encounters with the objects.

Lieutenant Accoin said he interacted twice with the objects. The first time, after picking up the object on his radar, he set his plane to merge with it, flying 1,000 feet below it. He said he should have been able to see it with his helmet camera, but could not, even though his radar told him it was there.

A few days later, Lieutenant Accoin said a training missile on his jet locked on the object and his infrared camera picked it up as well. “I knew I had it, I knew it was not a false hit,” he said. But still, “I could not pick it up visually.”

There was even a near-collision between a pilot and one of the UFOs, indicating that at least on one occasion, the pilots had not witnessed some kind of an illusion but rather a tangible object.