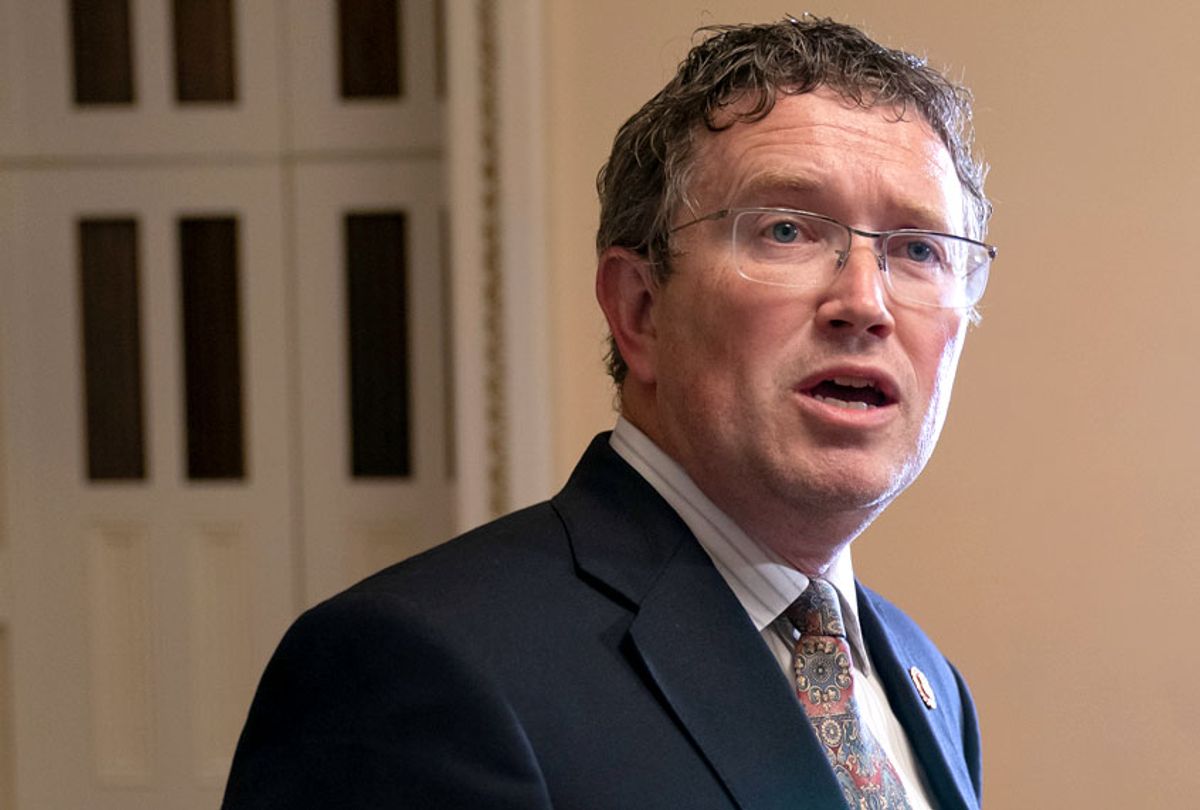 Rep. Thomas Massie, R-Ky., speaks to reporters at the Capitol after he blocked a unanimous consent vote on a long-awaited $19 billion disaster aid bill in the chamber on Tuesday, May 28, 2019. (AP/J. Scott Applewhite)
--

Rep. Thomas Massie, R-Ky., blocked the bill during a voice vote Tuesday, demanding that the bill be delayed even further until the House returns from recess next week. The Senate had already approved the bill last week in an 85-8 vote.

Massie accused Democrats of “legislative malpractice” for trying to speed up the bipartisan aid bill because there were very few members in attendance.

“If the speaker of this House thought that this was must-pass legislation, the speaker … should have called a vote on this bill before sending every member of Congress on recess for 10 days,” Massie said on the House floor. “You can’t have bills passed in Congress with nobody voting on them. That is the definition of the swamp, and that’s what people resent about this place.”

House Majority Leader Steny Hoyer told reporters that both House Minority Leader Kevin McCarthy and Minority Whip Steve Scalise had agreed to the process and that a handful of rogue Republicans were acting alone in trying to block the bill. The bill was held up until recess because Republicans in the Senate had stalled their disaster aid bill to echo President Trump’s demands for money for the southern border. They ultimately caved and passed the bill just before leaving for recess, Politico reported.

Most of the money in the bill is allocated to states hit by Hurricanes Michael and Florence in 2018, like Florida, Georgia and Alabama, as well as states hit by wildfires like California and Oregon. The bill also contains about $1.4 billion for Puerto Rico, funds that Trump tried to block, ABC News reported.

“Frankly, I cannot understand why any member would object to giving relief to so many millions of our citizens who have been badly damaged by natural disasters,” Hoyer said.

Massie’s objection came just days after Rep. Chip Roy, R-Texas, blocked a unanimous vote on the bill because it did not provide any money for the “emergency and humanitarian crisis we face at our southern border,” as Trump had demanded. Roy called for a “quite modest $4.4 billion” for the border.

Despite being the only holdout at the time and demanding more funds for his own priority, Roy also blamed Democrats for his decision, calling the vote without the full House present too “swampy.”

“This is a $19 billion bill that is not paid for when we are wracking up $100 million of debt per hour,” Roy said. He has also called for Trump’s tax cuts to be made permanent even though they blew a $2 trillion hole in the national debt.

“I commend my colleague, Rep. Massie, for objecting to today’s Unanimous Consent on a $19.1 billion emergency supplemental bill that has been languishing … because Speaker Pelosi and the Democratic conference would rather play politics on impeachment,” Roy later told Fox News.

Republicans in states like Georgia, which has been devastated by storms and flooding, slammed their Republican colleagues for holding up money their constituents desperately need.

“It’s pathetic that some members have chosen this moment to grandstand & get into the national headlines,” said Sen. David Perdue, R-Ga., who helped convince Trump to drop his demands and approve of the bill last week. Perdue is up for re-election next year in a race some Democrats believe they can win.

"Unfortunately, more clowns showed up today to once again delay disaster relief for the states and farmers devastated by the storms of 2018," wrote Rep. Austin Scott, R-Ga.

Not only did Massie block the emergency disaster relief bill, he also blocked a short-term flood insurance program extension that House Republicans had signed off on and was passed last week by the Senate.

Hoyer called the move “shameful” and vowed to bring both the disaster aid bill and flood insurance extension up for a vote on Thursday.