An enchanting jukebox musical goes all-in on Elton John's life. It just can't break with its own center of gravity 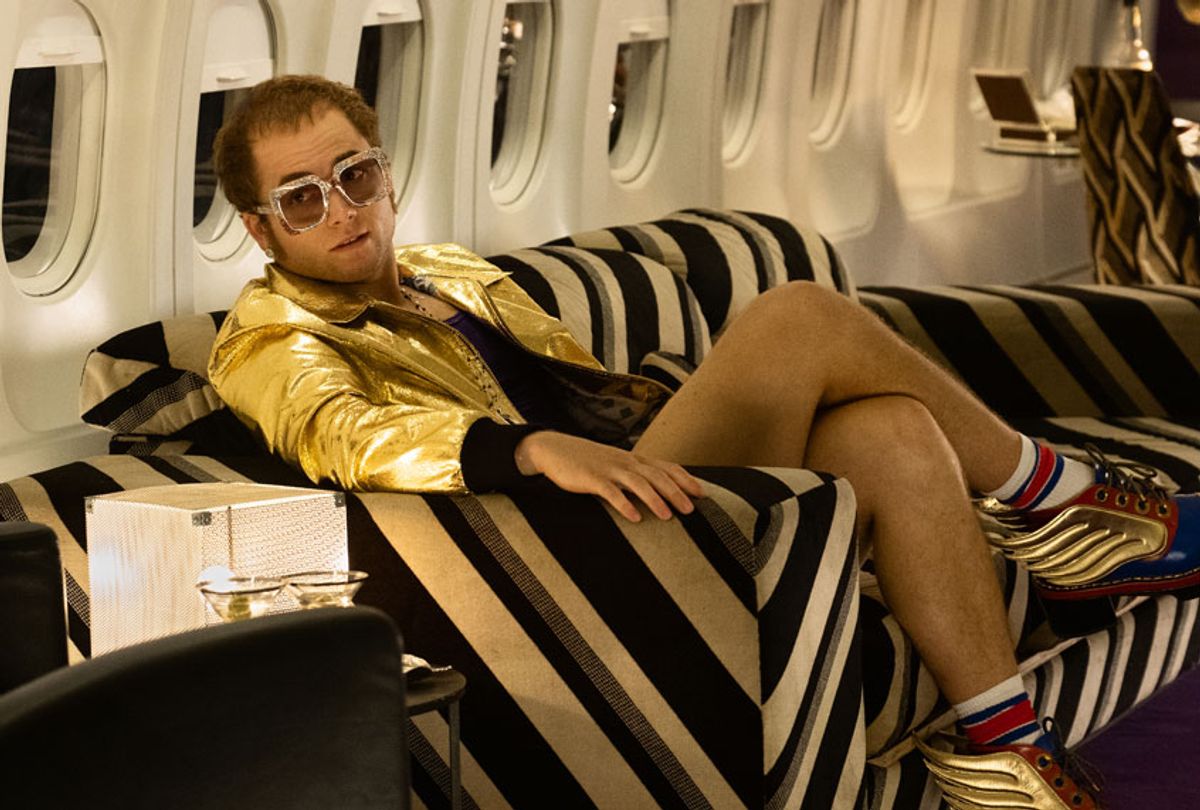 It might sound blasphemous to say that the tumultuous artistic and personal life of legendary superstar Elton John — he of the epic excess and bling, the spectacular stage presence and record-breaking albums, the iconoclastic and canonical songs of eternal longing — doesn’t provide enough dazzling material to make a good film into a great one. It’s like looking at a towering sparkling showgirl headdress and shrugging, “Needs more feathers.”

And make no mistake: “Rocketman,” the new biopic slash jukebox musical about the rise to fame, the fall from grace, and the eventual slaying of the personal demons of one Elton Hercules John, née Reginald Dwight, is good. Enchanting even, when director Dexter French pulls off the stylistic flourishes that he and “Billy Elliott” screenwriter Lee Hall sprinkle liberally throughout the film. (A pivotal scene at the bottom of a swimming pool lifts a near-tragic moment with just the right amount of surreal touch; a similar encounter at the end, when Elton has a breakthrough in rehab, clunks to the ground with a thud.)

"Rocketman" works with an embarrassment of riches, starting with the cast. Bryce Dallas Howard could be looking at Supporting Actress nods for her at turns bewitching and repulsive portrayal of Elton's domineering mother. There is no hint of the valorous Robb Stark in Richard Madden's icy performance as villainous manager John Reid, shown trapping Elton in an abusive relationship as a means of turning the musician into his personal extractive industry. In the "there are no small roles" category, Tate Donovan turns in a memorable bit as Troubadour Club owner and LA music impresario Doug Weston.

As Elton's artistic collaborator and best friend Bernie Taupin, "Billy Elliott" alum Jamie Bell ("Donnybrook," "Fantastic Four") provides the grounding heart and soul of the film, while also functioning as a stand-in for the audience. In many ways "Rocketman" is a tender love letter to Taupin, whose friendship and artistic partnership with Elton built a shy suburban boy with a good ear and a singular voice into Captain Fantastic.

But it's Taron Egerton as Elton John who carries and sells the film — often backwards and in platform heels. Wild as it may sound to approach such a mercurial and marvelous character with beautiful restraint, Egerton's performance is meticulously calibrated — the vulnerability, the playfulness, the towering ego of the genius and the agony of the moments when his lifelong battles with rejection and shame get the better of him, it's all there.

And, of course, there's the music, and Egerton isn't faking it. He really sells the iconic tunes written by Elton and Bernie in dynamic new arrangements by Ben Foster that give old favorites new life as they are put to work in service of the story, not merely rolled out in chronological order of release.

"Rocketman," to its credit, is neither hagiography nor glib "Behind the Music" rollercoaster ride. The film doesn't shy away from showing the ugly personal and professional deterioration of the man the audience first meets as a shy, chubby young boy (played first by the devastating Matthew Illesley, then by Kit Connor) with a preternatural gift for playing by ear, as multiple addictions end up taking their toll on him in adulthood. And unlike its recent peer, last year's Queen biopic "Bohemian Rhapsody" — which French was pulled in to rescue when director Bryan Singer was fired during production — "Rocketman" isn't skittish about men having sex with each other, or queerness as an integral component of its subject's identity, nor does it shy away from including its subject's professed sex addiction in the rehab scenes that form the scaffolding around this memory play.

With all of this going for it, you might ask, how could “Rocketman” not soar?

Hall's script is strongest when depicting Elton's lower middle-class childhood and early training as a musician, from weekends on scholarship at the Royal Academy of Music to touring England with soul bands from the States, but it tightens its grip around its subject to the exclusion of almost anything and anyone else once Elton hits Los Angeles and becomes a sensation. In this respect, the film's closeness to Elton John — he and Hall collaborated on the stage musical adaptation of "Billy Elliott," and Elton is an executive producer of this film — could paradoxically have hampered its ambition. French and Hall keep the story so tightly focused on Elton, so doggedly up-close and personal, that the film effectively shuts the rest of the world out, leaving so much unsaid about the culture and times that made him and unmade him before he got sober and took back his life and career in the ‘90s.

Which is to say, this towering vision of spangle and heartbreak could have used, yes, a few more culturally significant feathers to elevate it from enjoyable biopic to a larger artistic and cultural statement than that which its larger-than-life subject can carry alone. For example, Elton's pathway from addiction to sobriety sidesteps the role the AIDS crisis played in Elton's life and his friendship with Ryan White, whom John has credited as "the spark that helped me to recover from my addictions," with the AIDS foundation that resulted mentioned as a footnote during the end credits. To do that historical throughline justice would have meant widening the lens away from Elton at times, which the film seems most reluctant to do.

Maybe it's bad form to want a movie to be more ambitious than what it wants to be. It's not like "Rocketman" isn't an enjoyable, emotional ride through a fascinating star's most tumultuous years, wisely stopping itself before the calmer Disney and domestic era takes over. But what if Hall's script had allowed us to know where Bernie would go when he'd storm away, eyes full of pain, from one of Elton's bloated binges? What if any of those anonymous chorus boys in the "Bennie and the Jets" gay club dance scene had lines, interiority, a life that even orbited Elton's? There are passing mentions of the tabloid scandals that plagued Elton, but the specific grievances of the baser parts of our culture get virtually no air time, and therefore no interrogation.

The best musical biopics transcend their subjects to tell larger, grander stories about the culture that made those artists into celebrities and their artistic and cultural legacies, for better or worse. Oliver Stone's "The Doors" isn't just a movie about rock monster/sex god Jim Morrison, as compelling as Val Kilmer was in the role — it was a commentary on the '60s counterculture at large. F. Gary Gray's "Straight Outta Compton" tells the story of being young and black and musically gifted in South Central Los Angeles and breaking a whole new genre of music wide open for the rest of the world. And Todd Haynes' "I'm Not There" takes an unconventional approach to dramatizing the life of Bob Dylan by crafting an incisive meta-commentary around the enigmatic superstar.

We can certainly count "Rocketman" as a solid rock biopic, and a bewitching jukebox musical to boot. It's no sin to deliver a dramatized juicy life on a gilded platter, to check all the boxes that a superfan might want checked: shoe-shopping montages, cocaine binges, the compelling personal drama, and so many musical moments that lift our collective feet from the ground. But if it's wrong to want a movie about Elton John to have aimed not for ten inches off the floor but for the stars instead, I don't think I want to be right.