Local currencies work! There are already thousands of BerkShares in circulation

Who knew a community currency could last this long — or bring so much exported business back home? 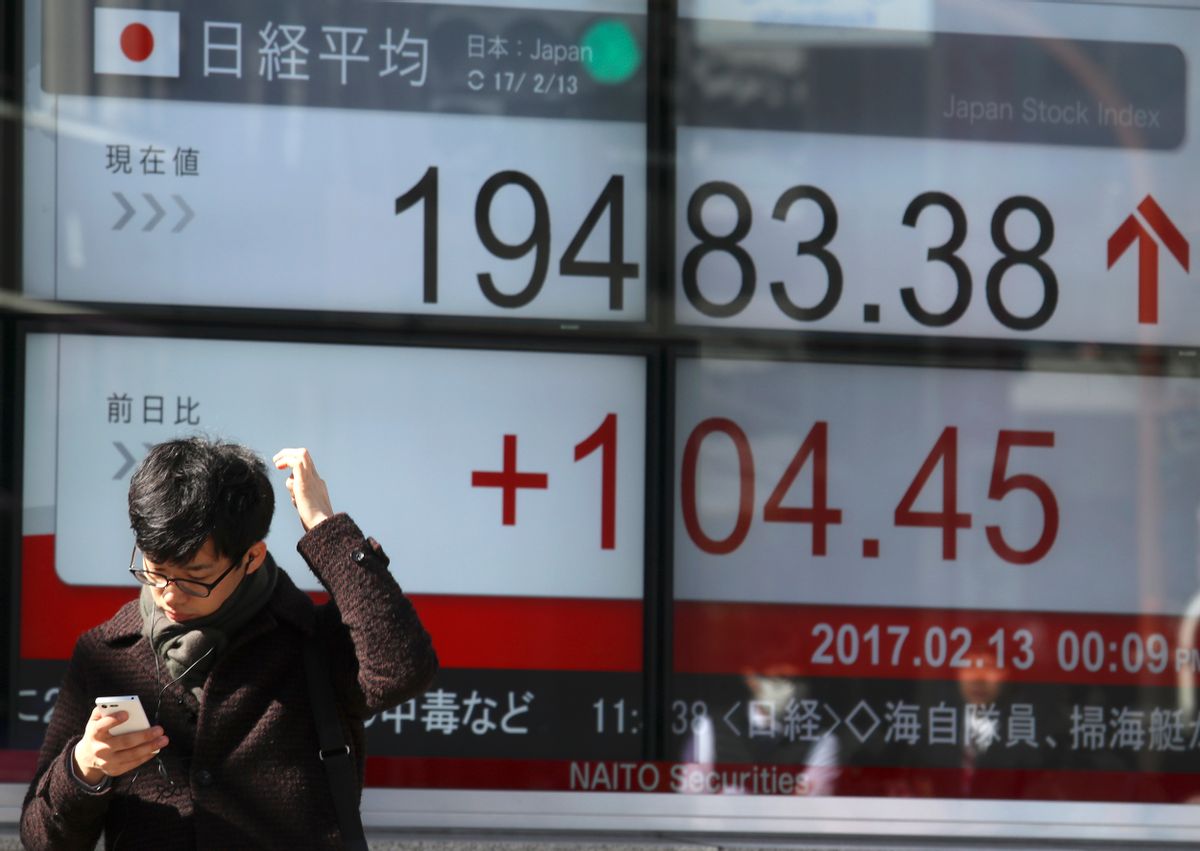 A man uses a mobile phone in front of an electronic stock indicator of a securities firm in Tokyo, Monday, Feb. 13, 2017. (AP Photo/Shizuo Kambayashi) (AP)
--

Back in the 1990s, a couple of farmers and a deli owner in Western Massachusetts were denied loans, despite their history of good credit.

What did the determined Yankees do?

Create their own currency, of course.

Selling the currency for cash, the farmers and deli owner were able to make needed improvements and upgrades, and the people who bought the currency saved 10 percent on their future purchases from the farms and deli.

Fast-forward to the early 2000s, and, building on the success of “Deli Dollars” and “Farm Preserve Notes,” the BerkShare was born.

The local small businesses of Great Barrington, a town in the Berkshire mountains of Western Massachusetts, issued the currency in 2006, now available at the local banks, for 95 cents for one BerkShare (that becomes a 5 percent savings when BerkShares are spent at local businesses). The few national/chain banks in the region do not participate. There are now 140,000 BerkShares in circulation ($133,000 in USD).

The local currency is a project of the local Schumacher Center, whose mission it is to cultivate “a just and sustainable global economy; apply the concepts locally; then share the results for broad replication.”

The program is supported by more than 400 local businesses that accept the currency.

While big banks might be blamed for many of the problems in rural America these days, in Great Barrington, it’s the small banks that are the heroes: “The key to our success has been partnership with local banks,” says Moriarty. With four local banks and 16 branches where BerkShares can be exchanged, it’s easy to see how the currency is easily integrated into the community.

Each BerkShare is backed by 95 cents in a checking account, explains Moriarty. “Any account reconciliation is done by the banks.” And you don’t need an account with the bank in order to trade the money. The benefit to the bank is the opportunity to market to you when you walk in to obtain your BerkShares.

Involving the local banks also alleviates the BerkShares group from being out on the street. “We’re not out in the community in a visible way. Everyone knows the local bank. The banks are really a part of the fabric of the local economy,” says Moriarty. With local rotary club and chamber of commerce support, she says, “We’re lucky to have a tight-knit business community.”

Moriarty also facilitates the local business planning program, connecting entrepreneurship with the opportunities and benefits of local transactions. She works to co-create the conditions required to have an import replacement business economy.

In other words, Moriarty is taking the BerkShares idea to the next level, not just replacing currency, but replacing the local businesses that were exported.

“It’s part of a larger vision, where consumers and producers can work together to realize [the] potential of natural resources and social capital,” she says.

The idea is to think about the way consumers and producers can work together, with consumers providing feedback to farmers and other entrepreneurs.

This in turn lets farmers and entrepreneurs know what consumers want, and what they are currently purchasing from outside the region. Farmers can then work to fulfill those local needs locally, so the consumer no longer needs to import what they want.

It’s all about “identifying gaps and resources in [the] economy, and seeing how we can transform those.”

For example, say you want to purchase office furniture, but there is no local manufacturer, and the nearest furniture manufacturer is 1,000 miles away. Moriarty’s program will help identify that need, and work with local producers to fulfill it, so when people need furniture in the future, they may be able to procure it locally.

“It really stems from asking the community what they [are] currently purchasing from outside the region,” explains Moriarty. “If they say they’re buying office furniture from X-Y-Z out in the Midwest, then we see that as an opportunity to produce that locally.”

For example, Berkshire County is known for its rolling hills. That becomes an opportunity for farmers to produce wool. “A collective of knitters said, ‘we are buying our yarn from California,’” says Moriarty. “Those knitters can come together to purchase their wool locally [now], and it’s an opportunity for those farmers to process their wool locally. Our role in it is framing the profile of the necessity of the regional economy.”

In other words, they provide the resources and tools for people to empower themselves to carry ideas forward.

The other asset is that BerkShares are intentionally meant to be spent locally, capturing and keeping all the money locally. “You don’t have that same sort of relationship created when you’re using a credit card or U.S. currency,” she says. “It highlights [the] importance of local spending.”

The real-world currency also features local people and artwork. “It’s a celebration of place,” she says. “I don’t think we’d see as much activity if BerkShares were digital.”