How movies like "Labyrinth" can help you talk about intimate fantasies

With a little thinking and creativity, turn-ons from pop culture can be a starting point for real-life exploration 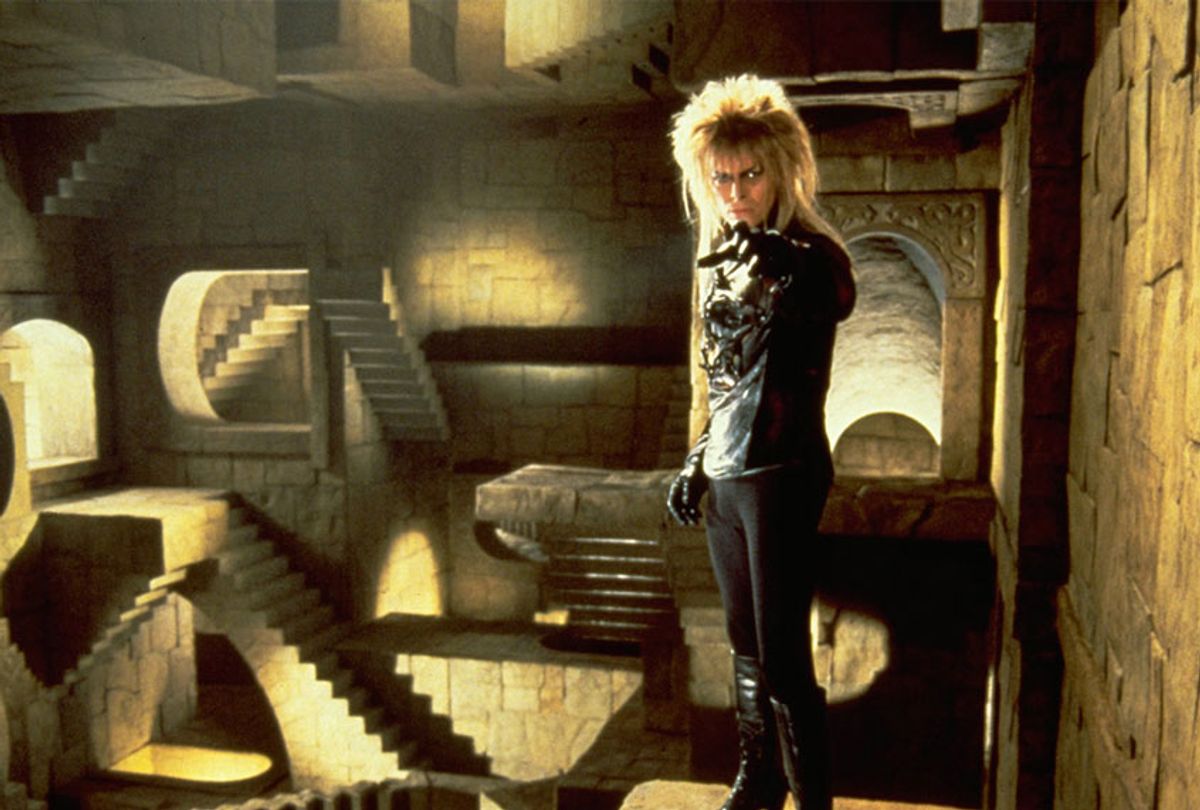 As you’re exploring your sexual fantasies and the things you might want to try, you may be surprised by how many fantasies are already lurking in your subconscious. We’ve all had things catch our eye during our lives, even if we didn’t interpret them as sexual at the time. Think about the images from magazines that you cut out and pinned to your wall in your teen years. For me, it was fashion spreads that invoked BDSM imagery. Or the page in a book that you dog-eared to read again and again, or to show to friends for the naughty thrill. Or the scene in a movie that you rewound to watch again and again. I remember being fascinated by things that I didn’t completely understand, or being drawn to things that I might not have understood as sexual but that caught my attention all the same. Whether these items are overtly sexual for you, or simply scenes or images that invoke feelings you’d like to explore—all of those things are clues to what gets your juices flowing.

Many times we dismiss these things as unrealistic, unattainable, logistically impossible, or simply unsafe. And often, that’s true. But these turn-ons can still become a great starting point for exploration. With a little thinking and creativity, you can find the essential features of a scenario that make it hot for you and work those elements into your real life.

When I’m teaching classes about finding your fantasy, I make myself vulnerable first, by sharing my own turnons, and then take volunteers from the audience. So here’s how this exercise works for me: When I was young, Labyrinth was one of my favorite movies. I watched it so many times I nearly wore out the VHS tape. And while David Bowie isn’t going to whisk me away to a fantasy kingdom, I can still unlock a lot of clues to my sexuality thanks to him.

In case you’re not familiar with the story, it goes something like this: Teenager Sarah is stuck babysitting her infant brother, Toby, and makes a wish to the goblin king that her brother will be taken away. But as soon as the goblins come, Sarah realizes her mistake and asks to have her brother back. This is when David Bowie, playing the goblin king, appears and where my own preteen fantasies began.

Bowie’s character sets up a quest for Sarah, where she must find her way to his castle at the center of a labyrinth to retrieve her brother. This movie features power dynamics that are far from subtle. Each scene between Sarah and the goblin king is bristling with (unintentional?) tensions, and although I didn’t have words for any of it at the time, I was clearly picking up on something. Bowie even carries a riding crop in at least one scene.

Sure, the details of a fantasy film might be challenging to replicate, but playing with power dynamics is easy. You don’t need any toys or tools, just a little confidence, imagination, and a willingness to suspend disbelief. Want to do some actual Labyrinth role play? Knock yourself out. Just want to try giving or receiving orders? Simple to do!

The first step might simply be one person calling the shots. Or physically looming over the other person. Just putting one person on their knees sets up an immediate power imbalance that can be hot to explore. Add a little “do as I say” (with or without an attempt at Bowie’s accent) and you’ve got my knees quaking.

When I presented this class at a kink conference, my first volunteer decided to stick with the Labyrinth theme and brought up the scene where Sarah falls down a hole full of “helping hands.” These hands grab at her and say they can guide her either up or down the passage.

Does this scene get your attention, too? Think about the elements going on there. The hands are anonymous. There’s pain, or at least discomfort. There are multiple hands. Sarah is out of control of the situation. So, yes. The actual scene is difficult to replicate. But here’s where we get creative. Think about how you could get the elements that are essential to this scene’s hotness into your real life.

If you go to play parties, here’s one way that could go: You’re tied down to a massage table (loss of control). You’re blindfolded, making the people who touch you anonymous. Multiple people put their hands on your body. Some of them pinch or grab you. Now that’s a fairly literal interpretation, but that’s because it’s important to see that even seemingly outlandish fantasies might not be that hard to replicate.

What if you wanted to replicate it at home with only one partner? How about this: You’re blindfolded to help with the fantasy of anonymity. You could add bondage if you want to feel more vulnerable. Then, your partner touches you all over your body, pausing between touches so you don’t know where you’ll feel a hand next. Maybe your partner swaps out different kinds of gloves—latex, leather, fur—to provide various sensations. Maybe they use a few household objects to keep you off balance.

Depending on what pieces are essential to your turnon, it’s often a lot easier than you might think to work those elements into your sex life. I’ve interviewed dozens and dozens of people about their kinks and fetishes, asking them why they do the things they do. Regardless of the fetish, just about everyone had power, vulnerability, and trust on the list somewhere. And you don’t need any special surroundings or equipment to play with those elements yourself.