What is the cost of lies?: A billboard for HBO's "Chernobyl" brings 9/11's toxic aftermath to mind 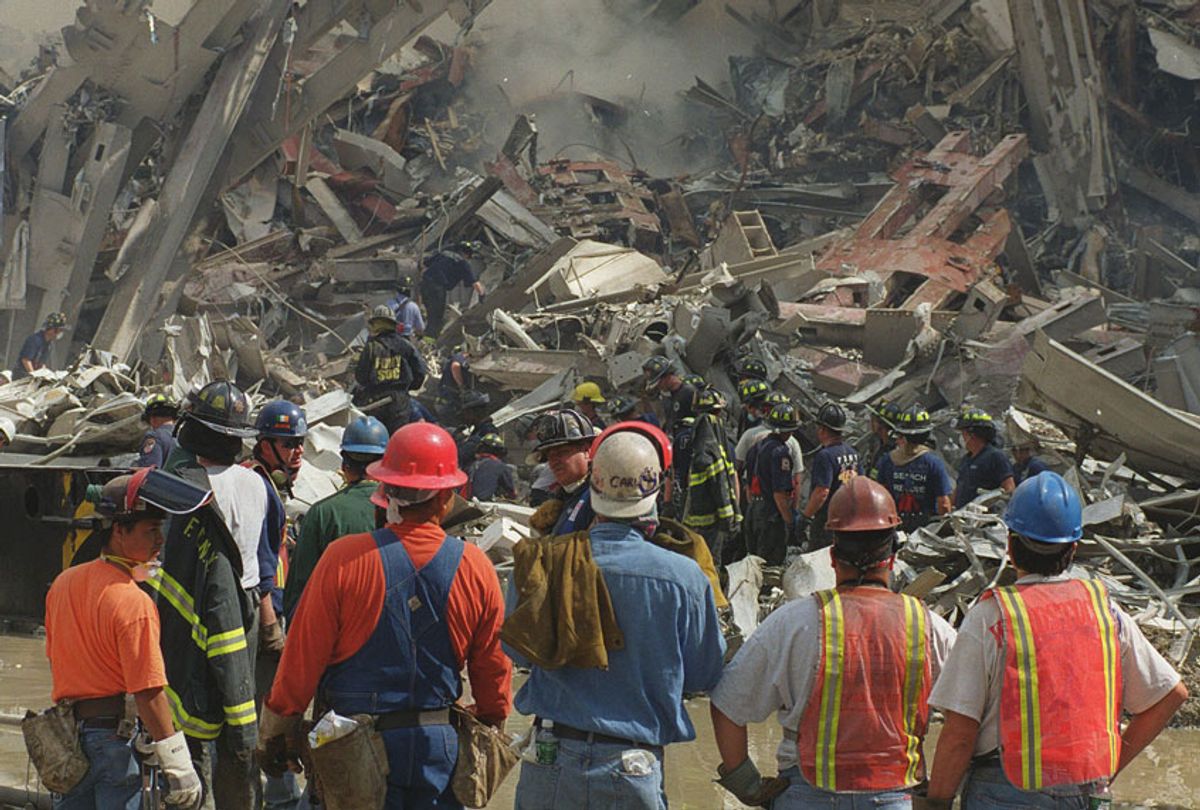 The other day walking from my office in lower Manhattan to City Hall across Broadway I saw an MTA bus billboard for the HBO mini-series Chernobyl. The image on the poster was of clean-up workers with respirators shrouded in a toxic cloud with a simple question under the haunting image that read “What is the cost of lies?”

It struck me as ironic that on that particularly sunny day the rolling billboard was making its way through the very streets in lower Manhattan that almost 18 years ago were shrouded in a similarly toxic looking clouds after the collapse of the World Trade Center towers.

The scale and nature of the two events are vastly different. Chernobyl’s 1986 explosion and ensuing conflagration was an industrial disaster of planetary consequence while the WTC event was the result of a terrorist attack.

The area in the Ukraine around the Chernobyl site won’t be inhabitable for thousands of years while the rebuilt WTC complex is one of the busiest tourist attractions in the city.

Yet, in both situations, the governments lied by sugar coating the level of environmental contamination and risk for the workers doing the clean-up and the civilians living in proximity. And as a consequence, thousands of additional lives have been lost and will continue to be lost.

In each instance, it was an overriding concern for the economy, markets, and national image that motivated political leaders to betray the public trust with deadly consequences for the citizens who that believed their pronouncements.

Back in 2008, the Los Angeles Times reported on a Ukrainian parliamentary commission investigation into how the disaster’s aftermath was handled by the Soviet and Ukrainian Communist Party bureaucracies. The probe found that local officials “ordered weddings to go ahead on the day of the accident, despite a shower of radioactivity, to persuade people that nothing was amiss.”

Three days after the 9/11 attack it was former New Jersey Governor Christie Todd Whitman, then head of the Environmental Protection Agency, who told reporters that  “the good news continues to be that air samples we have taken have all been at levels that cause us no concern.”

That upbeat and inaccurate statement was uttered as the fires at the World Trade Center site continued to burn and smolder as they would for months after the towers collapsed.

No doubt, Whitman’s reassurance and the encouraging EPA press releases that followed helped lower Manhattan return to normalcy. It would take a few years for the idea that the danger had not passed to sink in as thousands began to become sick and die from their exposure to the unique cocktail of abrasive toxins released by the collapse and fires that followed.

Two years after 9/11 an investigation by the EPA Inspector General found that EPA “did not have sufficient data and analyses to make such a blanket statement,” as “air monitoring data was lacking for several pollutants of concern.”

Moreover, the OIG learned that it was President George W. Bush’s White House Council on Environmental Quality (CEQ) that heavily edited the EPA press releases “to add reassuring statements and delete cautionary ones.”

Despite the reality that samples taken indicated asbestos levels in Lower Manhattan were between double and triple EPA’s limit, the CEQ described the readings as just “slightly above” the limit the EPA IG found.

And when the EPA’s Inspector General tried to divine who had actually written the press releases they “were unable to identify any EPA official who claimed ownership” because investigators were told by the EPA Chief of Staff  that “the ownership was joint ownership between EPA and the White House” and that “final approval came from the White House.”

According to the Union of Concerned Scientists the post EPA releases were also vetted by Bush’s National Security Advisor Condoleezza Rice.

In 2016 Whitman told the Guardian she was “very sorry that people are dying and if the EPA and I in any way contributed to that, I’m sorry. We did the very best we could at the time with the knowledge we had.”

In the years since the toll from the WTC toxic exposures has continued to mount with the expectation that the post 9/11 death toll will soon approach the almost 3,000 killed in the actual attack and collapse.

Congress established the 9/11 Victims Compensation Fund to compensate individuals and their families killed or injured in the attacks that day or as a consequence of the subsequent clean up that followed. The fund is running out of money and is slated to close at the end of next year.

The VCF has paid out over $5.13 billion dollars of its $7.3 billion original budget. It determined 23,390 claimants were eligible and made initial award determinations for 22,204 of those claims.  Another 16,850 applications are still pending and the agency continues to receive thousands of additional claims.

Last year, Rupa Bhattacharyya, the Special Master for the 9/11 VCF, announced that as a consequence of a dramatic spike in the number of 9/11 wrongful death and World Trade Center-related cancers claims, the fund would have to greatly reduce the size of its payouts by between 50 to 75 percent depending on the nature of the claim.

According to the World Trade Center Health Program 10,000 first responders and 9/11 survivors have already been diagnosed with cancers that have been linked to WTC toxic air exposures. That number is expected to spike to 25,000 by 2025.

The FDNY, which lost 343 the day of the attack has now lost close to 200 Firefighters and Fire Officers to WTC related cancers and other diseases. Union officials estimate another 6,500 active and retired FDNY personnel continue to battle a certified WTC condition including cancer — roughly more than half of the 11,000 FDNY connected personnel that served at the site.

In addition to the first responders, civil servants from a variety of agencies and thousands of building trade union members on the clean-up, thousands of public and private sector workers were part of the efforts to reclaim the wider lower Manhattan neighborhood devastated by the collapse of much of the Port Authority complex.

It is estimated that in addition to 90,000 first responders that served at the site, there are another 400,000 people that lived and worked in lower Manhattan that may have an elevated risk of contracting a WTC ailment.

There were also 29 public schools in the zone as well as some colleges.

“When the schools were closed after 9/11 we knew it was our obligation to do whatever we possibly could to continue our students education so as to give them some normality when down here our Federal Government told us it was safe to come down here,” United Federation of Teachers  President Michael Mulgrew said at a rally to support renewing the 9/11 VCF. “I want to be clear — on that day, our government made an obligation. They told us it was safe to come back down here and open the schools. 2,500 school staff and 19,000 students came back into the zone.”

Over the next few weeks, the Congressional Budget Office is expected to release a cost estimate for re-authorizing the VCF. In essence, they will have actually to calculate what just is the cost of lies.