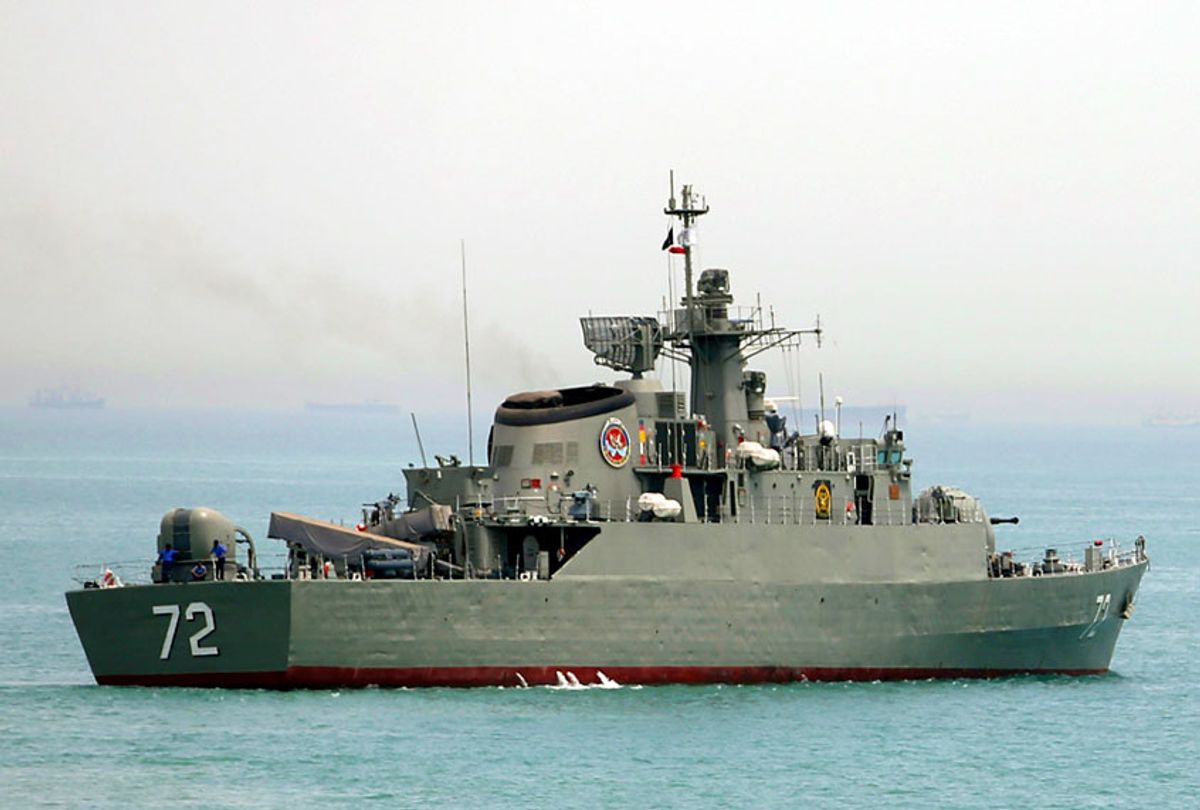 Last week a senior Pentagon official accused Iran of having sabotaged four oil tankers in the Gulf of Oman on May 12 and of firing a rocket into Baghdad’s Green Zone on May 19. Iran executed these events, he said, either directly or through regional “proxies.”

But instead of creating sensational headlines, the briefing by Vice Adm. Michael Gilday, the director of the Joint Staff, was a flop, because it was clear to reporters covering it that he could not cite a single fact to back it up.

The story got only the most cursory coverage in major news outlets, all of which buried Gilday’s accusation deep in stories about the announced deployment of 1,500 more U.S. troops to the Middle East. Relatively few readers would even have noticed Gilday's inflammatory claims.

Nevertheless, the briefing raises a serious question whether National Security Adviser John Bolton intended to use the new accusation against Iran stoke a war crisis — much as Vice President Dick Cheney, in another era, used the argument that Iraq had purchased aluminum tubes for a covert nuclear weapons program to justify the invasion of Iraq.  A careful examination of Gilday's accusations make clear that they do not even claim to be based on any intelligence assessment.

Gilday was apparently chosen to give a non-political patina and the authority of the U.S. military to an accusation that clearly originated with Bolton and Secretary of State Mike Pompeo. In a prepared statement, Gilday declared, “In the recent past, Iranian leaders have publicly threatened to close the Strait of Hormuz. They have backed up those threats with actions, posturing their forces in an effort to intimidate the movement of international trade and global energy sources.”

Gilday went on to cite “[r]ecent actions by the Iranian Revolutionary Guard Corps, to include attacks against foreign tankers in Fujairah and the attempted covert deployment of modified dhows capable of launching cruise missiles,” calling them “all part of a dangerous and escalatory strategy by Iran to threaten global trade and to destabilize the region."

During questions and answers, Gilday added that "we believe with a high degree of confidence that this stems back to the leadership of Iran at the highest levels and that all of the attacks that I mentioned have been attributed to Iran through their proxies or their forces.”

When pressed by reporters, however, Gilday simply repeated variants of the argument he had presented in his prepared statement. When a reporter pressed him for evidence to support the accusation, he responded, “So the Iranians said they were going to close the Strait of Hormuz. The Iranians struck those — those tankers. The Iranians struck the — that pipeline facility in Saudi Arabia through their proxies in Yemen. We know that they’re tied directly to the proxies in Iraq that launched the rocket [in Baghdad’s Green Zone].”

Then, when asked by a persistent reporter, “What do you have to back up your case?” Gilday repeated yet again that the Iranians “have said publicly they were going to do things. We learned more through intelligence reporting they have acted upon those threats and they've actually — they've actually attacked.”

Gilday was thus deploying a crude syllogistic argument (A is true, and B is logically related to A, so B must be true), as the entire basis for the accusation against Iran regarding these two incidents.

But his syllogism was based on a false premise. What a senior Iranian official actually said on April 22 was not that Iran intended to close the Strait of Hormuz unilaterally, but that it would do so in response to any effort to prevent Iran from using it. Alireza Tangsiri, head of the Revolutionary Guard Corps naval force, declared on April 22, "According to international law, the Strait of Hormuz is a marine passageway, and if we are barred from using it, we will shut it down.”

When another reporter challenged Gilday, the admiral finally referred to “intelligence sources that we have.” But when the reporter asked for further clarification, Gilday reverted to another version of the same syllogistic argument based on the idea that the Iranians had “said that they were going to close the Strait of Hormuz.”

Another reporter tried again, asking, “Can you provide us with anything to back this up?” Gilday responded, “I can’t reveal the sources of that reporting." That wasn’t what he had been asked to do. His response was another obvious ducking of the reporters’ demands for any reason to believe that the U.S. government had actual evidence of Iranian responsibility.

A reporter then tried to try come to Gilday’s assistance by giving him an example of the generic kind of evidence the press was expecting.  Was it perhaps the “sophistication of the attack,” the reporter asked, or “maybe the forensics that you’ve done?” But Gilday simply refused to be drawn into such a discussion.

Gilday’s use of “We” in expressing “high confidence” in Iran’s culpability conveniently obscured the all-important question of who had actually decided to make the accusation last week. He was obviously not making it on his own, and he did not even hint at any analysis or assessment from the U.S. intelligence community on the oil tanker sabotage or the rocket fired into the Green Zone. Conveniently for the those behind the Gilday briefing, moreover, no one in the press asked why no such intelligence analysis had been mentioned.

The circumstantial evidence thus points to John Bolton and his allies, notably Pompeo and Acting Defense Secretary Patrick Shanahan, as the unacknowledged sources of the judgment. That fact is crucial to understanding their Iran strategy, because evidence clearly indicates that those policymakers have based their decisions to escalate the conflict on information provided by a highly self-interested source — the government of Israeli Prime Minister Benjamin Netanyahu.

That Israeli intelligence warning, moreover, was part of a broader Israeli warning to the United States on alleged Iranian plans to attack U.S. troops and other U.S. and allied targets in the Middle East. On May 6, leading Israeli national security correspondent Barak David reported that warning had been given to Bolton and other senior U.S. officials in an April 15 meeting in the White House. The New York Times Jerusalem bureau reported virtually the same warning by Israeli intelligence that Iran or its proxies were planning a possible strike or strikes against American and/or Saudi targets in Iraq and elsewhere, again citing the “senior Middle Eastern intelligence official.”

Furthermore, those Israeli claims have been “stovepiped” directly through Bolton, who leads the U.S. team of senior national security officials in regular meetings with senior Israeli officials aimed at agreement on joint strategies on issues of policy toward Iran.  Those meetings began in December 2017 with agreement on an initial “Joint Work Plan,” and include “joint preparation for different escalation scenarios in the region concerning Iran, Syria, Hezbollah in Lebanon and Hamas in Gaza.”

The implications of this arrangement for the internal U.S. politics of Iran policy are profound and dangerous. It means that intelligence analysts have been removed from the process, allowing Bolton and Pompeo to determine the validity of the intelligence warnings on Iran coming from the Israelis. That same stovepiping gives Bolton, who has long had a long reputation for cynically twisting intelligence to advance his own political aims, a crucial source of power over intelligence on Iran.

The result is a gambit that appears to be just as deceptive as the creation of the false intelligence case for the invasion of Iraq and equally intended to provide a political basis for military confrontation with Iran. This time around, corporate media outlets can’t plead ignorance of the trickery as they did in 2003. Adm. Gilday's remarkable performance in ducking the demand for evidence revealed all too clearly that the alleged “intelligence” claimed by the Bolton’s team is simply a device to push the United States toward confrontation.