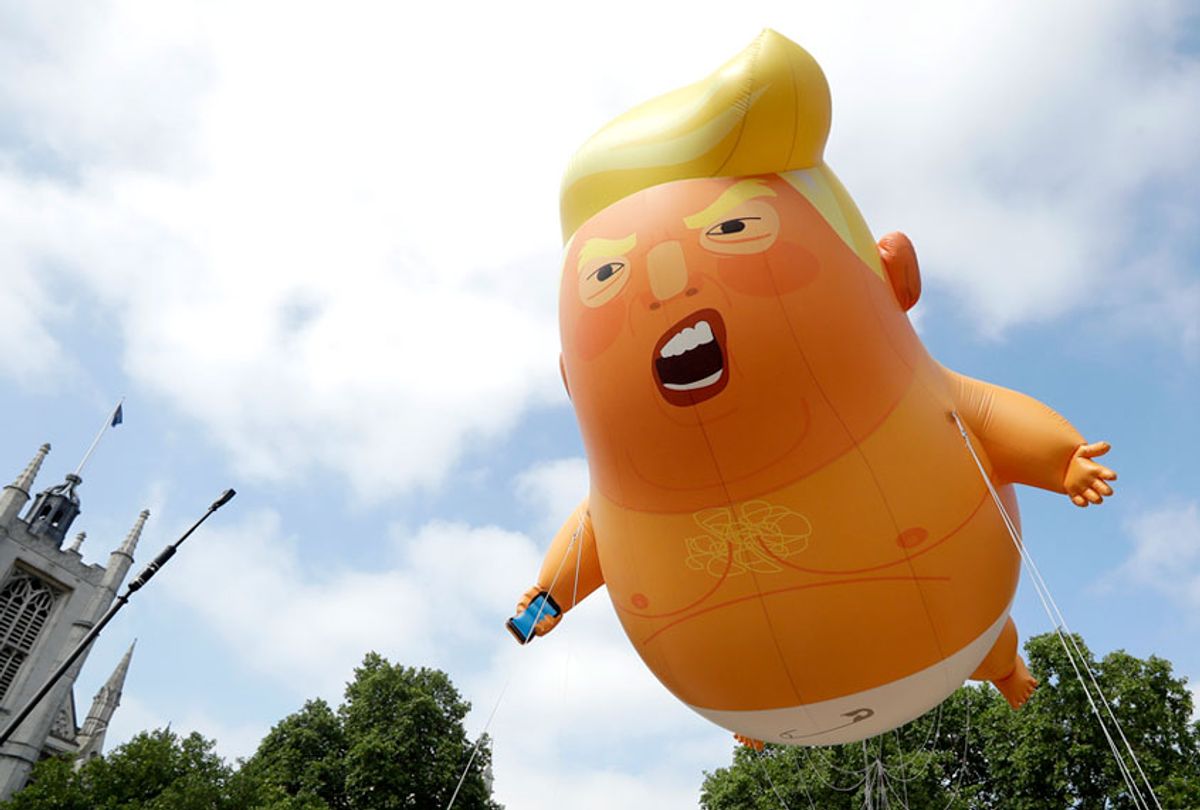 A six-meter high cartoon baby blimp of U.S. President Donald Trump is flown as a protest against his visit, in Parliament Square in London, England, Friday, July 13, 2018 (AP/Matt Dunham)
--

Protesters have joined forces with the mayor of London to ensure that President Donald Trump faces what is becoming a ritual form of hazing and humiliation while he is in the United Kingdom, as a 20-foot orange baby blimp with small hands and straw-blond hair is expected to take flight to mark his visit.

The huge, inflatable effigy, which depicts the president wearing a diaper and clutching a mobile phone, was reportedly granted permission Friday to take flight over London Tuesday in the face of Trump's three-day state visit by the city's mayor, Sadiq Khan.

Khan on Saturday published a column in The Observer, the sister newspaper of The Guardian, saying it was "so un-British to be rolling out the red carpets this week for a formal state visit for a president whose divisive behavior flies in the face of the ideals America was founded upon — equality, liberty and religious freedom." He also compared Trump to "the fascists of the 20th century."

Trump, who is known for attacking, assailing, insulting and mocking his political enemies on Twitter, as well as for his famously thin-skin, fired back at the mayor hours before the wheels of Air Force One had touched down in the U.K. Monday morning.

"He is a stone cold loser who should focus on crime in London, not me," Trump tweeted, referring to Khan. "Kahn [sic] reminds me very much of our very dumb and incompetent Mayor of NYC, de Blasio, who has also done a terrible job — only half of his height."

The Trump blimp was previously granted permission to hover over Britain's Parliament during the president's visit to London last July. This year, the Trump Baby team, which is part of the Stop Trump Coalition, said the giant orange inflatable would only take to the air if a crowdfunding target of $50,000 was met in support of a group of charities

Organizers announced the target was reached on Sunday – and raised it to $50,000 to give the groups an "even bigger boost." They said the money will go to groups in the U.S. and U.K. "working against Trump's toxic policies every day," including in relation to climate change and women's reproductive rights.

Trump's schedule for Tuesday reportedly includes a business breakfast at St. James' Palace with outgoing Prime Minister Theresa May. He will then visit Downing Street for talks with May, followed by a joint press conference. In the evening, he is set to host a dinner at the residence of the U.S. ambassador where he will be joined by the Prince Charles and his wife Camilla, the Duchess of Cornwall.

Demonstrations are expected to break out this week in London, as well as in other major U.K. cities, including Belfast, Birmingham and Manchester. Protestors are expected to rail against the president's policies on immigration, race relations, women, climate change and more.

Trump's state visit comes in the wake of a recent poll, which revealed over half of London residents oppose Trump visiting the city while 24 percent support the trip.