"Hilariously Infertile": Karen Jeffries on finding the comedy in reproduction

"People really want to feel like they're not alone, and also to laugh a little bit," the author tells Salon 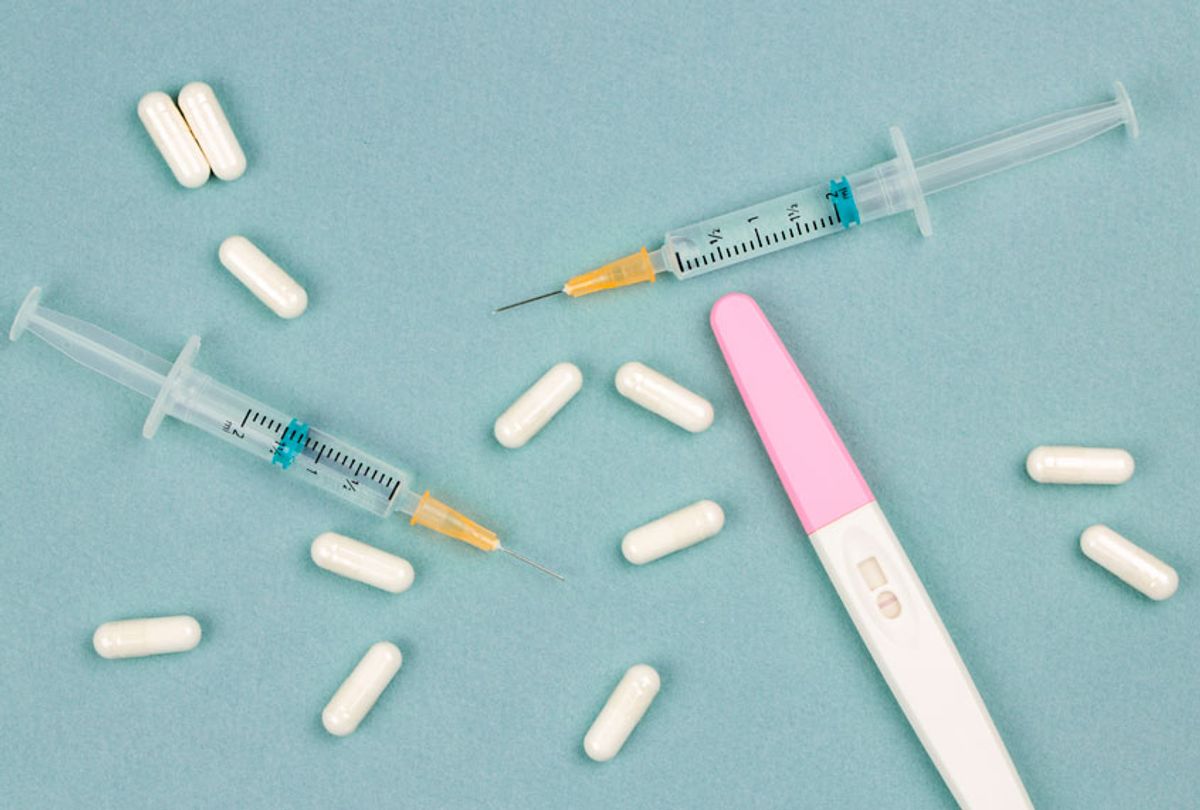 Karen Jeffries is a typical suburban mother of two, but her path to that identity wasn't an easy one. After learning she had polycystic ovary syndrome (PCOS), she and her husband went through a hormonal wringer and came out of it with a deepened sense of the absurdity of human reproduction. Jeffries eventually turned her experience into the popular Instagram account Hilariously Infertile, and eventually a candid, ribald memoir of the same name. We spoke to Jeffries recently during a lunch break at her day job about shedding taboos off the imperfect art of making a baby.

Your first calling wasn't as a comic, and yet you decided to kind of take on this mantle. What made you make that choice?

I was on maternity leave after having my second daughter and helping a good friend of mine and also an extended family member through their infertility. My husband and I were doing dishes and I was like, “Alison's ovulating, so it's go time for them. And, as you know, Jen's follicles are at 17, so I told her to plan, she's probably going to have her IUI on Sunday." My husband was reading a book at the time that was about more general stuff and he said, “You should write a book about this.”

I just completely laughed it off, and then during nap time a week or so later I just opened up my laptop and started writing. At first I just thought it was really cathartic, and this stuff was just flying out of me. Then, after writing a number of pages I thought, this is how women really talk to each other. Five weeks later I had pretty much almost exactly what is the published version today. And my husband's like . . . this wasn't really the self-help book that he was thinking of but, it was funny.

You didn't just start it as the book, though. You have this big following on Instagram now.

I wrote the book three years ago and then I started sending it to literary agents in and around New York City and publishing companies. I either didn't hear back from anybody, or they said, "We just don't think there's a big enough market."

I never even had a personal Facebook account. I got my niece, who was 19 at the time, to help me and teach me what a hashtag was, and then we just started growing the platform. I grew it by posting all the time and people really resonated. The more and more the platform grew, the more I was knew this is something.

I totally agree. People never used to talk about infertility and now we're seeing it in movies and seeing it in TV shows — multiple sitcoms and dramas. I just think that it is so great and it is so important. This conversation, when I was going through infertility, wasn't happening. I'm a very, very open person, so I didn't understand why people don't talk about this. I talked about it with everyone. I just didn't see the big stigma behind it.

Do you follow the stories of Gabrielle Union or Tyra Banks, all these other women who have come forward? Have you been paying attention to their narratives? Does that inform your work in any way?

What are among the misconceptions that people have about infertility and about what happens in trying to conceive?

The biggest thing for people going through infertility to understand is that they're not alone.

With infertility itself, the other day, I was telling somebody I'm infertile and he was like, "That's not really a real thing." I think that lack of knowledge, lack of understanding about people who are going through infertility, is common. Even my mother one time made a really snarky comment like, "Well, she can't get pregnant because she's not supposed to." When I started going through infertility, I called her out on it and I said, "Mom, I'm going through this now. Remember you said this about one of our family members?" Another misconception that's more faith-based is that you're going against God's will. It think that is easy for them to say until infertility comes knocking on their door. It's easy to judge when you're not in it.

And then there's, "Well, there's so many children out there waiting to be adopted. "Why don't you just adopt?"Adoption's not a walk in the park, it's not, "Oh I'll take the easy way out and adopt."

It takes forever and there's tragedy and loss in adoption too.

Unless you're someone who just effortlessly gets pregnant and has financial security, there's no "I found the shortcut to having a happy family." Now you've made talking about this issue part of your life and part of your mission.

I just think that people really want to feel like they're not alone, and also to laugh a little bit, because there are some really funny parts when you're talking about reproduction.

The game really has changed. It has been so often such a private thing. Some of that is because often there is so much disappointment, because you just don't want a lot of people putting their expectations and hopes on you until something is really a sure thing. But there is also then the loneliness around that.

However your parenting experience is, no matter what you think you've been prepared for, you're not really. I most identified with your moments when you were reacting with, "Excuse me, why did no one tell me it was like this?"

I remember being like "Why didn't anyone tell me about the gunshot wound to the vagina [feeling]?" That was huge. No one talks about it, even when you read the funny and inappropriate pregnancy books, they still don't really talk about that that much. All my life I've been around children, taking care of children, and then to be a new mom and feel unprepared when my resume was stellar?This sucks.

And then after going through what you go through when you go through infertility, I remember feeling, "But I've wanted this and tried and I cried and I worked so hard and I went through everything. Do I not want this?" And having a hard time with that. Eventually once your hormones balance out and once you get some sleep you realize, this is what you do want, but in those first few weeks, oh my God.

There's so much stigma around, 'You got what you wanted, so now you can't complain." You can totally complain about motherhood. We all need to complain about it a lot. I remember when my first one was born, just walking around outside and thinking, "Every person on this street is the product of a woman who went through this absolute horror show that I just went through."

Another thing that I also used to do in the beginning when I would get so overwhelmed and stressed out in terms of parenting was take a step back and reevaluate for a second. You have heat, you have electricity, you have running water, you have clothes, you have love. You have a great awesome life, and need to not focus on the fact that there was a meltdown at CVS.