"That is not too high a standard," Buttigieg's 2020 rival Sen. Kirsten Gillibrand fired back in a statement 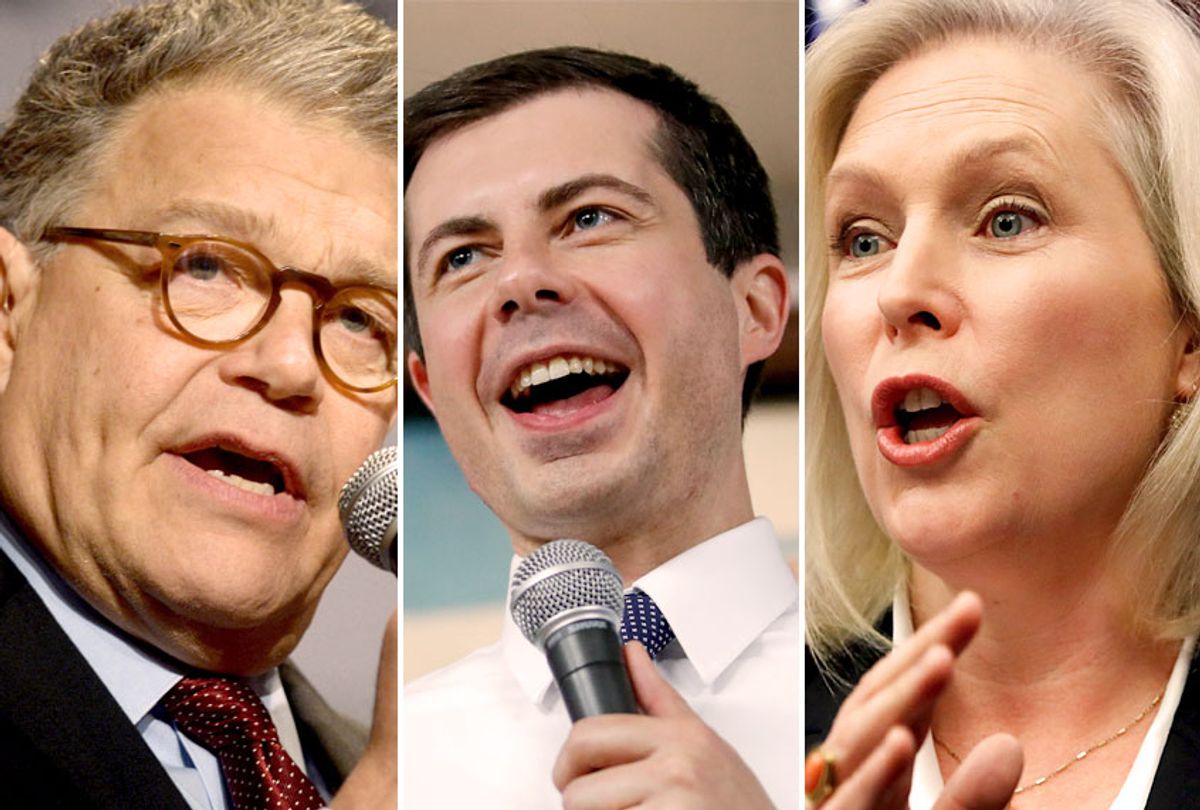 Pete Buttigieg, the mayor of South Bend, Indiana, who is running for the Democratic presidential nomination in 2020, recently said he would not have "applied that pressure" on former Sen. Al Franken, D-Minn., to resign after he was accused of inappropriate touching by multiple women.

"I think it was his decision to make" Buttigieg told MSNBC's Chris Matthews during a town hall event Monday in Fresno, California.

The presidential candidate's full remarks came after Matthews specifically asked, "Al Franken: Should [he] have been pushed to resign from the U.S. Senate by the Democratic Caucus —  his fellow caucus members?"

Buttigieg replied, "I think it was his decision to make, but I think the way that we basically held him to a higher standard than the GOP does their people has been used against us."

When Matthews followed up by asking whether the Democratic senators who exerted pressure on Franken to without haste were correct for doing so, Buttigieg replied, "I would not have applied that pressure at that time before we knew more."

In response, a rival for his party's presidential nomination, Sen. Kirsten Gillibrand of New York, who was the first Democratic senator to call for Franken's resignation, released a statement calling attention to "eight credible allegations of sexual harassment — two since he was elected senator, and one from a congressional staffer."

"That is not too high a standard, regardless of how the Republican Party handles this behavior," Gillibrand said.

She added, "Yes, it was Senator Franken's decision alone to leave the Senate — a path he ultimately chose — but for many senators, including myself and others in this primary field, that was not too high of a bar to raise our voices and make clear we value women."

And Gillibrand was far from the only senator competing for the 2020 Democratic nomination who called on Franken to step down after multiple women accused him of inappropriate touching. The others included: Michael Bennet of Colorado, Cory Booker of New Jersey, Kamala Harris of California, Bernie Sanders of Vermont and Elizabeth Warren of Massachusetts.

Gillibrand, however, has received outweighed attention from Franken supporters, because of the prominent role she played in his eventual resignation. During a town hall meeting in March, she answered a question from MSNBC's Chris Hayes about the situation.

"If there are a few Democratic powerful donors who are angry because I stood up for women who came forward with allegations of sexual harassment, that's on them," she said at the time.

She later added, "The truth is we miss [Franken], and people loved him. But he had eight credible allegations against him of sexual harassment for groping — two of them since he was a senator, and the eighth one was a congressional staffer."

Radio host Leean Tweeden, Franken's first accuser, alleged in a blog post that Franken "knew exactly what you're doing. You forcibly kissed me without my consent, grabbed my breasts while I was sleeping and had someone take a photo of you doing it, knowing I would see it later and be ashamed."