The subjects of a six-part HBO docu-series, "On Tour with Asperger's Are Us," want the focus to be on the laughs 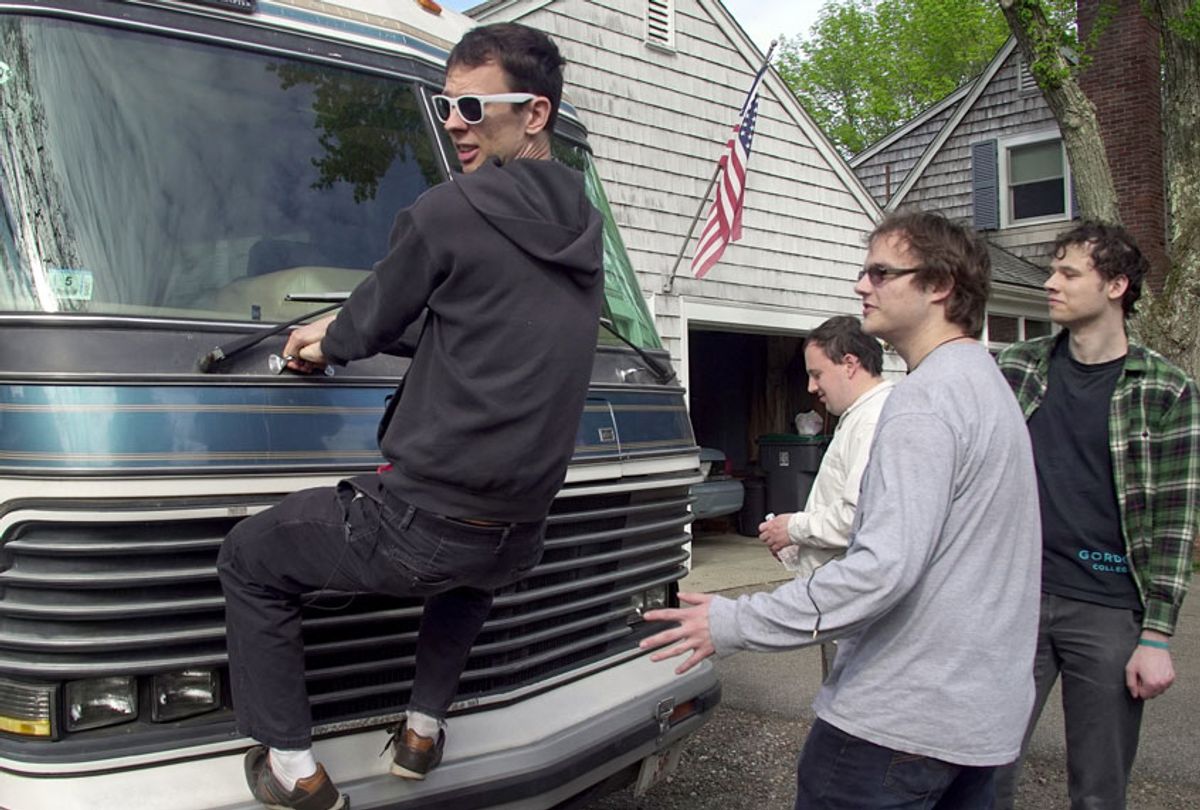 Noah Britton, Ethan Finlan, New Michael Ingemi and Jack Hanke in "On Tour with Asperger's Are Us" (Courtesy of HBO)
--

As the comedians in Asperger's Are Us are quick to tell you, their job is to make you laugh — not to send some kind of social message about autistic people.

If you based your assumptions about them solely off the name of their troupe, you might think that their goal is to offer political and social commentary. And if you watch their sketches with that already in mind, you might see it. For example, there's a sketch in which Britton plays a father and Finlan plays a son who are celebrating the best day ever — Finlan's funeral (the joke was that the father was messing with the kid's head to teach him about fire safety). In another, they reference the Maria Haplin scandal (when President Grover Cleveland was reported to have fathered an illegitimate child) at a presidential press conference in which the commander-in-chief married a train. It seemed to me, as an observer, that they weren't just being funny (which they were), but commenting on bad parenting techniques and political sex scandals. In other words, it appeared that they were trying to send a message even as they made you laugh.

I was wrong, according to the comics themselves.

"We do a world where connotation doesn't exist and things can just be silly," Britton told Salon. "But now we're very cautious because we don't want people to read in meaning that's not there."

When I suggested that art can have a subtext that the artists themselves didn't intend to put in there, Britton emphatically disagreed.

"Well, I don't think that's valid," Britton explained. "If the artist didn't intend it, I don't think it's fair. I think it's someone projecting. You know, like you can read a social situation incorrectly and assume that 'Guy walked past me because he doesn't like me' when in reality he just didn't see you. And I think that's what a lot of art criticism is — it's people projecting their own beliefs into something that isn't actually there."

He added, "If we write a sketch and people are like 'Oh that's totally like, that's so funny because it's relatable,' we're like 'No, relatability has nothing to do with humor.' Relatability is something that makes people comfortable but it doesn't make it funny. And so yeah, if people read meaning into our work that's not there, we do find that annoying because obviously the whole point is this is just funny. And if you're thinking about a deeper stuff, you're missing the jokes, or you're not into it."

Hanke chimed in at that point.

"I also feel like different forms of art operate differently," Hanke explained. "I believe a lot of poetry is written, and song lyrics especially, are written deliberately with trying to get as many readers, or listeners, to read into something that identifies as their own experience if possible. Whereas our sketches are designed to not do that."

But what, I asked, about the people who look to comedians for profundity? Some of the most popular comedians working today discuss important political and social issues — and are taken seriously as thinkers even as they tell jokes.

"They should stop pretending to be comedians and just be like, 'I make interesting sociological observations,'" Britton argued. "That's a valuable service. Bill Hicks, great philosopher — not funny, but a great philosopher and really smart, interesting guy. I think if [Immanuel] Kant were alive today, he wouldn't be able to get away with writing long treatises, he would have to be on stage saying relatable things to disguise the fact that he's making interesting ethical and philosophical observations. And obviously we take a lot of inspiration from philosophers, as you see in our new show when we do the Socrates sketch."

Lehmann jumped in at that point to clarify what Britton was saying.

"You guys are very funny, and I know you want to be known for your jokes, but you're also making an important statement by saying that you don't want to be labeled or trivialized as some sort of heroes or models for other people," Lehmann explained. "You just want to be known for your comedy. I mean, obviously that's a struggle that we show in the documentary series, where a lot of parents, a lot of people are trying to put you on a platform or some sort of pedestal where you are a role model."

Britton concurred, although he admitted that "just like Monty Python and The Kids in the Hall, our biggest regret is the name that we ended up getting stuck with after we choose it with very little thought." He added, however, that "the whole reason it's called Asperger's Are Us is that we do Aspie-style comedy — a lot of quick word play, a lot of association within a lot of absurdism that ignores social convention. So if you're into that stuff, and you're highly verbal, you'll probably like the show. And if you're not into that stuff, then you know, please don't come expecting some kind of educational or like relatable things, because that's just not what we're about."

He also pointed out that sometimes people come up to their troupe expecting them to provide the types of life lessons that one would receive from advocates for the autistic community — not from comedians like themselves.

"It really sucks that we get a whole lot of people who are like 'my kid is autistic and non-verbal, will you help?" Britton observed. "We are so far from being in that position, and I'm sorry you're having trouble, but this goes so far beyond what we're capable of doing."

The work of Asperger's Are Us does make me laugh; whether that's because I'm on the spectrum or not is hard to say. Yet their point about wanting to be viewed as comedians and not social activists is a notable one. Part of this is because it goes against the grain of what one might expect from their name. The other and bigger part, though, is that saying they want to be known for what they do rather than simply for being autistic is, in its own right, an empowering and valuable statement.