Philippines strongman Rodrigo Duterte claims he "cured" himself from being gay 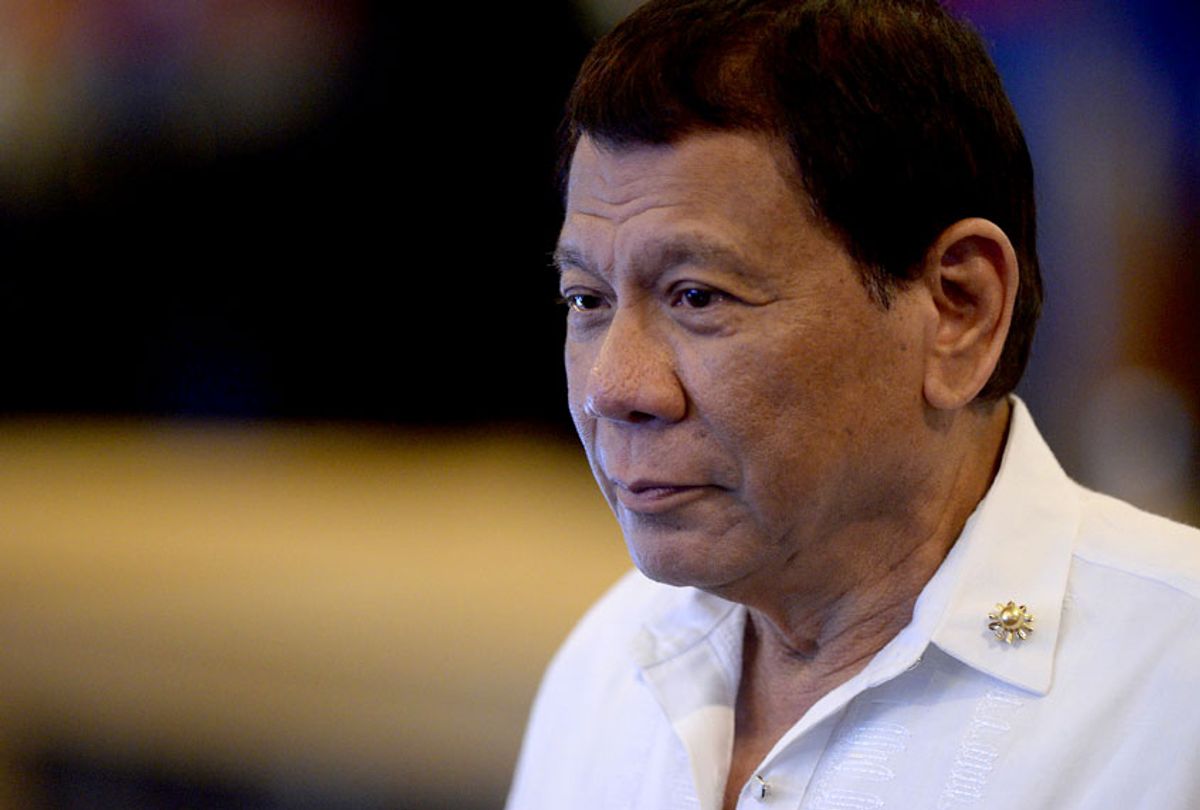 President Rodrigo Duterte faces public backlash after delivering a speech in Tokyo, in which he claimed to have managed to "cure" himself from being gay.

Speaking to an audience of Filipino expatriates in Tokyo, Duterte reportedly asked, "Who is gay here? I used to be gay. Gays can sense and identify fellow gays."

After the crowd reacted enthusiastically to his comments, Duterte then began to attack one of his chief critics in Filipino politics, Antonio Trillanes IV, through a homophobic joke, according to NBC News.

"Now I ask you, what do you think of Trillanes?" the Filipino strongman asked the crowd.

"Gay!" they shouted back in response.

"Trillanes and I are similar," Duterte continued. "But it’s a good thing I cured myself."

According to the Filipino news site Rappler, Duterte has a history of saying seemingly incongruous things about LGBTQ rights. He once claimed he was "open" to marriage equality, although he later reversed course on that issue. At the time, his famous saying was marriage is for "Adam, Eve and the gays."

During that same interview interview, he also said, "Maybe the gays were made to order to by God also or their God would be incongruous. Why just create a man solely for the function that is a universal practice? We assume in our catechism that we are created in the image of God. Definitely, the gays were created by God, and there has to be a reason for that."

When Duterte later reversed course on marriage equality, he did so by pointing to an issue of Time magazine with a transgender woman on its cover.

"That is their culture. That’s for them," Duterte reportedly said at the time. "That can’t apply to us, because we are Catholics."

He added, "And there is the civil code, which states you can only marry a woman for me, and for a woman to marry a man. That’s the law in the Philippines."

Duterte once used a homophobic slur to insult U.S. ambassador Philip Goldberg and asked if the leader of the Philippines' Commission on Human Rights was "gay or a paedophile" because of his concern about the deaths of teenagers in his war on drugs.

The brutal ruler has also previously hinted in the past that he might not be cisgendered, claiming in one interview that "when I was in high school, I did not know if I wanted to be a girl or a boy."

Duterte has become an increasingly prominent figure in American politics due to his close relationship with President Donald Trump, with America's commander-in-chief infamously laughing at Duterte's intimidating comments toward reporters.

In 2017, Trump also told Duterte, "I just wanted to congratulate you, because I am hearing of the unbelievable job on the drug problem. Many countries have the problem, we have a problem, but what a great job you are doing. And I just wanted to call and tell you that."