The number of measles cases in the US has now surpassed 1,000

"Vaccines are a safe and highly effective public health tool that can prevent this disease," Alex Azar of HHS says 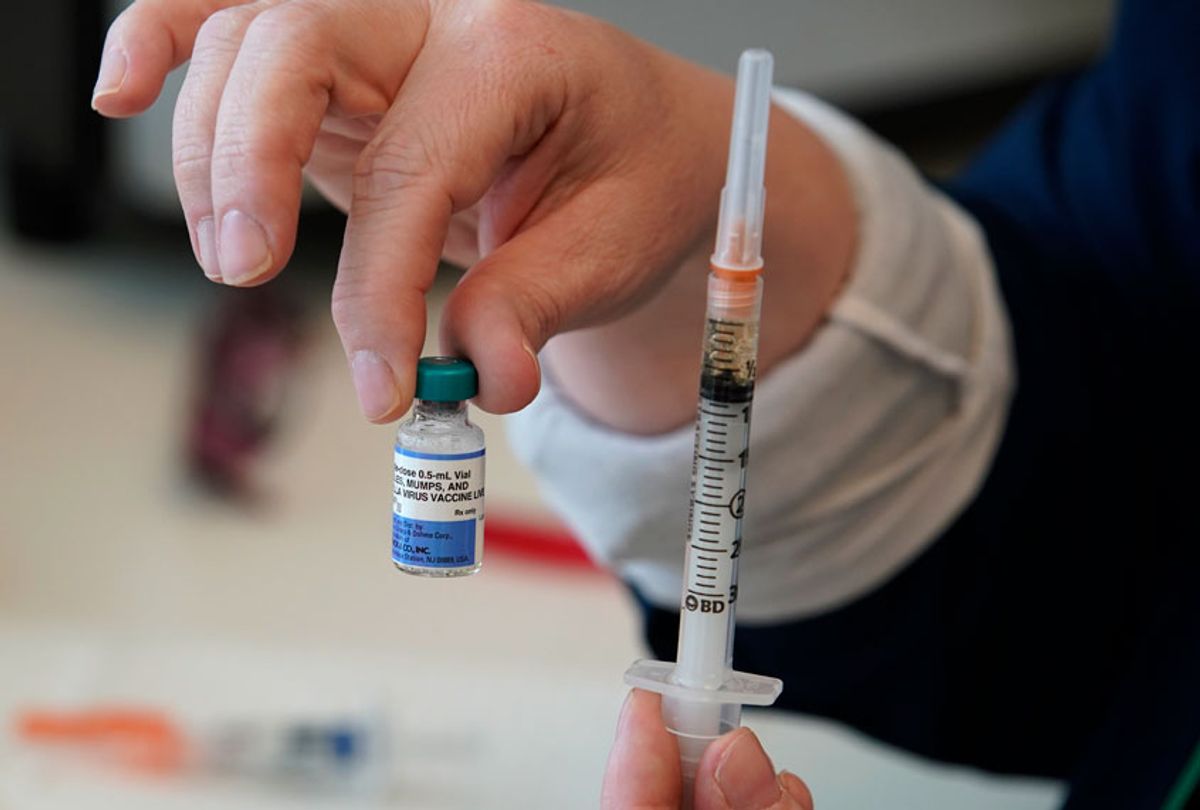 A nurse holds up a one dose bottle and a prepared syringe of measles, mumps and rubella virus vaccine. (Getty/George Frey)
--

A new report by the Centers for Disease Control and Prevention reveals that the number of measles cases confirmed in 2019 has now surpassed 1,000.

To be exact, the number of confirmed cases in the U.S. hit 1,001, according to NBC News. The news underscores why the Department of Health and Human Services (HHS) has been "promoting the safety and effectiveness of vaccines, amid concerning signs that there are pockets of undervaccination around the country," according to HHS Secretary Alex Azar.

"The 1,000th case of a preventable disease like measles is a troubling reminder of how important that work is to the public health of the nation," Azar explained in a statement.

He added, "We cannot say this enough: Vaccines are a safe and highly effective public health tool that can prevent this disease and end the current outbreak."

Azar also said, "Measles is an incredibly contagious and dangerous disease. I encourage all Americans to talk to your doctor about what vaccines are recommended to protect you, your family and your community from measles and other vaccine-preventable diseases."

Most of the measles cases in the U.S. this year have occurred in the city of New York and Rockland County, New York. A smaller outbreak in Oakland County, Michigan, was declared over on Wednesday.

"Vaccine hesitancy means decline in vaccination rates, which could lead to more outbreaks of vaccine preventable diseases. Public health [officials] need to apply different measures to deal with outbreaks, which takes time and energy and diverts resources from other important public health issues," Eve Dubé, a medical anthropologist and researcher at the Research Center of the CHU de Québec-Université Laval, told Salon in an email interview in March.

"Any decline in immunization rates will result in an increase in vaccine-preventable diseases. We have the opportunity now to prevent so many life-threatening diseases and have saved countless lives through immunization. It would be a travesty for children’s health if there were widespread outbreaks of diseases which can kill or permanently damage children," Gary Freed, a professor of health management and policy at the University of Michigan, also told Salon in March.

Both scientists stressed the importance of getting vaccinated.

According to the CDC's website, "MMR (Measles, mumps, and rubella)vaccine is very effective at protecting people against measles, mumps, and rubella, and preventing the complications caused by these diseases. People who received two doses of MMR vaccine as children according to the U.S. vaccination schedule are usually considered protected for life and don’t need a booster dose. An additional dose may be needed if you are at risk because of a mumps outbreak."