"Big Little Lies" is back to stare at the sea 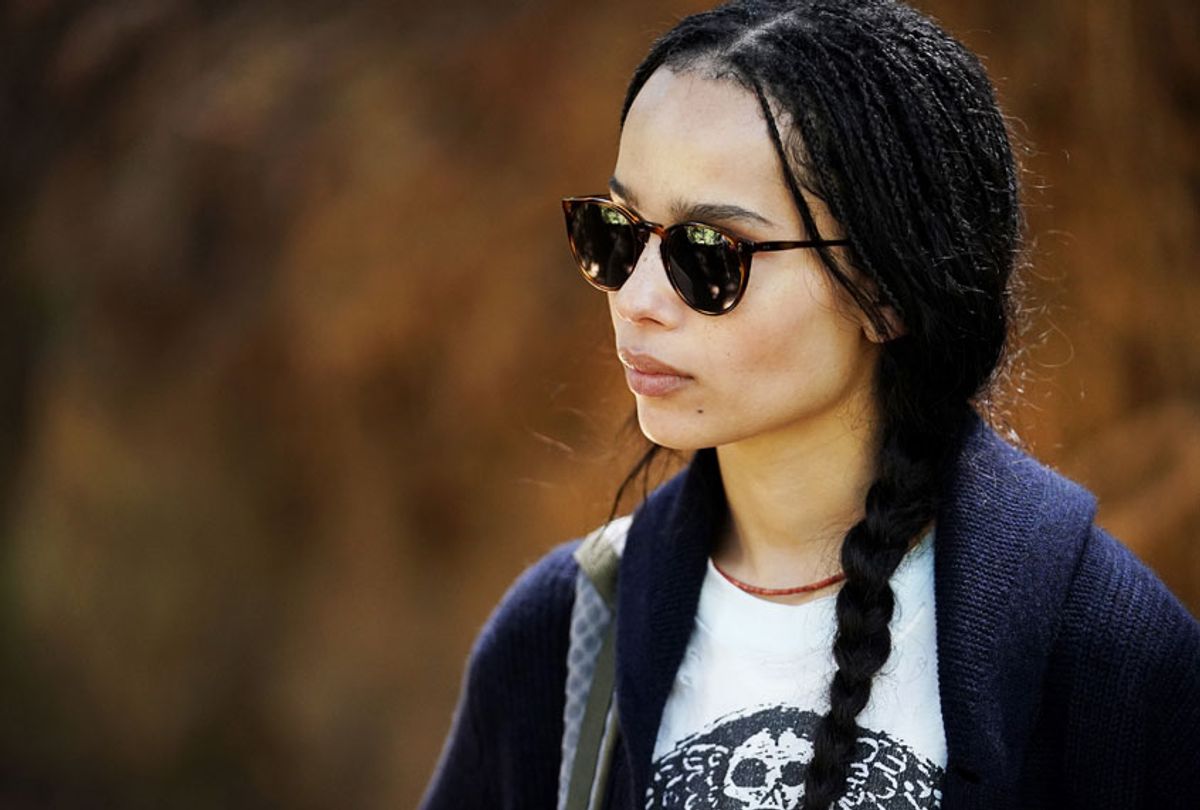 At some point in every season 2 episode of "Big Little Lies" at least one of its heroines stares at the sea. Their eyes might be alive with anxiety or dead with remorse, but they gaze at the waves, as if silently telling their secrets to the ocean. Rarely does ennui or regret look so lovely, so aglow in golden light.

When Madeline, Celeste and Jane aren't taking out their pain on the fellow citizens of Monterey, California, they're in therapy. They unburden themselves to one another, therapeutically, while parked by the beach. They pour their hearts out to a therapist (Robin Weigert) who is likely within a short driving distance to saltwater. They worry about Bonnie (Zoe Kravitz) who jogs through the sand, and on trails, and by the road, and stares at the sea, bogged down in memories of her mother roughly teaching her to swim and concern for her strained marriage.

The sea holds secrets, gorgeously filmed in sparkling waves by director Andrea Arnold, and every episode of the new season has all the mystique and glitter of a Dior perfume commercial.

Two years ago "Big Little Lies" was the feel-bitchy hit of the springtime with Reese Witherspoon hitting new heights of prickly as the community's queen bee Madeline Martha McKenzie, a dominant force of overcompensating in a small hive buzzing with egos.

Witherspoon ensures Madeline's bitchery is wielded in the service of good, and she's a worthy foil to Laura Dern's high-strung Renata Klein, a crazed career woman who spends the first season on the verge of losing her mind, or in the throes of a meltdown.

Together Dern and Witherspoon sank their claws into the script and ran away with the show, three-legged race style.  Viewers who weren't left agog at their campy verve likely connected to Nicole Kidman's ethereal Celeste, whose husband Perry (Alexander Skarsgård's) waxed and waned between doting romance and strangling physical abuse. Shailene Woodley's single mom newcomer Jane rounds out the foursome, except the group eventually becomes a quintet when it reels in Zoe Kravitz's Bonnie when she, you know, does them that huge favor at the end of the season.

Initially "Big Little Lies" was supposed to be a limited series based on Liane Moriarty's novel, but it did such a bang-up job of capturing the Olympian levels of pettiness that can bloom between modern women, particularly women who have a lot of money to blow and a lot of time to judge other women.  The drama's image of wealth is aspirational; its glorious sniping legendary. People lapped it up. First season director Jean-Marc Vallée made every episode a magnificent little getaway into the lives of terrible and fabulous but often unintentionally funny rich people. If you're into that sort of thing, as lots of people are, the series gave you everything you wanted, with Adam Scott and hot James Tupper on top.

And if you're into that sort of thing, knowing that the seven-episode second season kicks off Sunday at 9 p.m. on HBO must delight you. Enjoy that feeling, because you know what it is? It's the anticipatory sensation of having enjoyed a fine piece of pie and telling the server, what the hey, let's have another. Extra helpings feel wicked and enticing and good. And they aren't usually the smartest decision. Chances are by the time you hit that last fingernail moon's worth of crust, your stomach will be seized with sugar shock and regret.

But what do I know? I am of the opinion that season 1 was basically an overly long Lifetime movie with a much more expensive cast. Season 2 has yet to move my position on that, although I will say that David E. Kelley, who pens each episode's, ahem, teleplays, corrects some of the first season's nagging stumbles mostly because he has to. Arnold is a worthy successor to Vallée,  and she manipulates each shot and angle to impart a closeness upon each exchange that can feel either delectably conspiratorial or transgressive.

One insurmountable flaw for me in season 1 is the underdevelopment of Kravitz's Bonnie, who for most of the season is present as exotic (by the standards of the seaside enclave for the ultrawealthy) and free-spirited (by the standards of people who shop at Chicos and Ann Taylor Loft) and not much else. Perhaps this was meant to make her pivotal finale role a shock, but it also made me wonder why one of the few black women in town would risk everything to swoop in and save a bunch of women who rarely included her in their reindeer games.

Between coming to terms with being the main player in the accidental-but-she-definitely-pushed-him death of Skarsgård's Perry, Kravitz definitely has more to do now.

The weight of that secret leads to the townsfolk suspecting all of these women, whom they've dubbed the "Monterey Five." Celeste, for one, cannot quite let go of Perry, which means Skarsgård effectively haunts this season on multiple fronts. Madeline realizes that maybe she shoots her mouth off too much. And this leads to lots of sulking by the sea, weeping in the therapist's chair (thank goodness Weigert maintains a steady hand on her performance) and, for Celeste's part, reconciling her costly freedom with her profound love for her dead husband despite his monstrous outbursts.

Into this strolls the Streep of it all, playing Perry's mother Mary Louise. Streep's bereaved matron inserts herself into Celeste's life ostensibly to help her.  Her nosiness soon reveals her true intentions as inflicts her own aggressive mourning on everyone around her. Worse, and yet understandably, Mary Louise was so in love with her son that she simply can't believe that he physically abused Celeste, raped Jane and fathered Ziggy (Iain Armitage), the little boy currently attending school with her grandsons.

Mary Louise brings this up time and again to Celeste, and eventually to Jane, and doesn't seem to notice she's dragging them back through their lives' worst agonies. Mary Louise is a real pain in the ass, but Streep is incredible.

Streep also embodies the core conundrum of the second season's existence, in that her portrayal is utterly engaging, so much that one almost ignores that this is a fairly thin character whose main role is to prod the existing tension down the road toward some grand rupture. The multiple Oscar-winner brings a tightly-wound primness to Mary Louise that eventually softens into something profoundly sad. Watching her face as it slowly dawns on Mary Louise that her sainted son may have committed significant evils is a small masterclass in acting.

Mind you, this is all written from the perspective of someone who watched season 1 and reacted with a solid "meh." Those who love this series are likely to love these new hours just as well. As for we few who weren't entirely swept up, one can't quite say there isn't enough of a story to merit a new season of this drama. Obviously when more than one person is holding fast to a secret about a murder there's the distinct possibility that someone in that group might be moved to kill again.

Within the three episodes provided for review, however, there's not a whole lot of substance worth sustained attention. Aside from Renata, I should say; she really should get her own series. When Renata loses it, Dern transforms into the eighth wonder of the world; she's all lethal fumes and ripping nails. One of her defining lines this season is destined to turn up in a few of our nation's finer drag cabarets. To say what it is would be to spoil an arc-defining twist.

Otherwise the bulk of the early season's narrative revolves around some of the other little lies leaping out of the box and sending each family scrambling for damage control. It feels like the precursor to the big one storming out, and I supposed that's a hook, although a less interesting one than the various postcard shots of modern womanhood viewed and explored in the first season.

On the other hand, there's a subtext in this new season thanks to Streep's character and Bonnie's mom (played by Crystal Fox) that quietly, intimately examines the flawed lessons we learn from our parents, and our mothers in particular.

This new paradigm adds a complexity to Kidman's work, as Celeste wrestles with PTSD and starts to witness some of the damage Perry's abuse inflicted on her boys. Her portrayal proves the value of this series as a showcase for its performers, allowing us to wonder at what fresh and interesting dimensions this story might take if it weren't so beholden to secrets that steadily lose their juice.

Nobody can say we might never find out — after all, "Big Little Lies" initially was thought to be a one-and-done limited affair. Perhaps we should go for a drive, stare at the horizon and ask the sea. But don't forget to leave room for that extra pie. You don't need it, but it's coming.