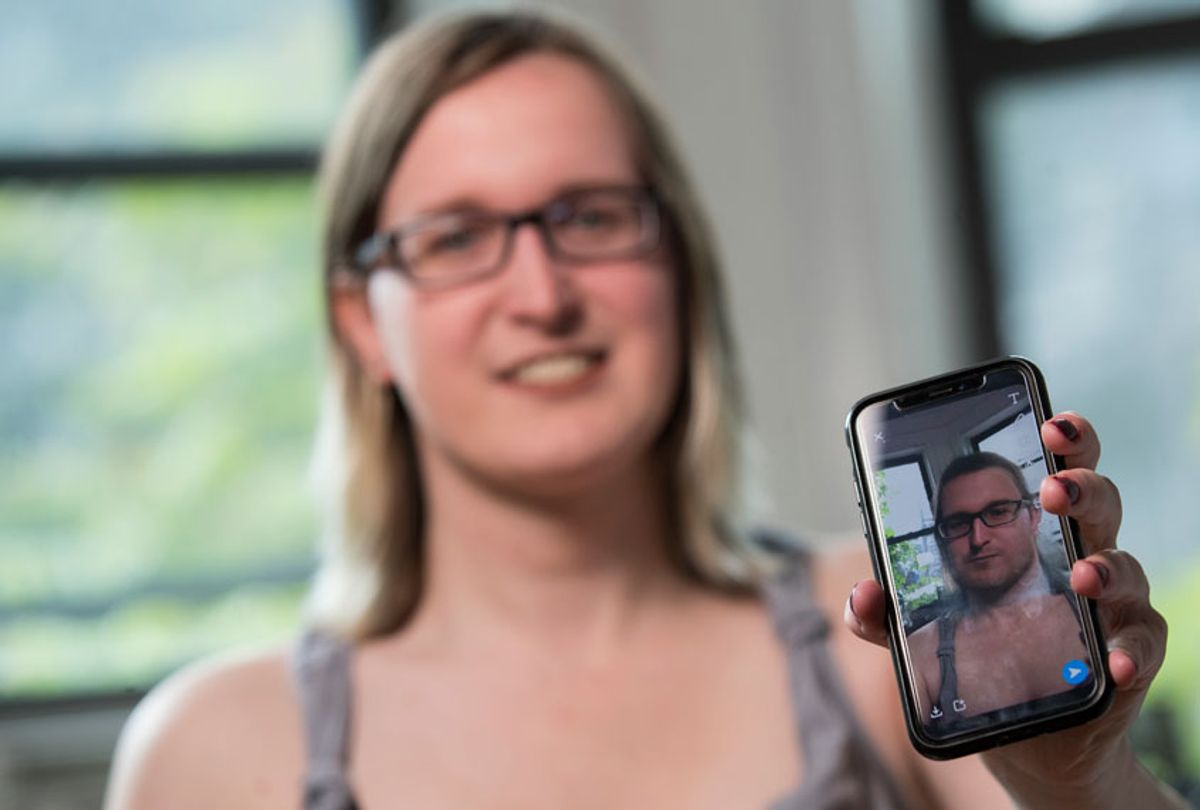 In this Wednesday, May 15, 2019, photo, Bailey Coffman shows her photo as a man in the Snapchat app during an interview in New York. (AP/Mary Altaffer)
--

Though market reports say Snapchat’s user base shrunk over the past year, the multimedia messaging app has been increasing in popularity since May, perhaps thanks to a controversial "gender-swap filter" that has been making headlines. The Guardian reports that people are downloading Snapchat in “droves” — more than a year after Kylie Jenner declared the app dead.

Indeed, a big appeal seems to be the aforementioned filter, which allows users to get a glimpse of themselves as the opposite gender — inasmuch as the algorithms can determine that, at least.

Here is an example of the filter applied to pop star and actress Miley Cyrus:

Yet while the filter is a lark for cisgender people — particularly those with stereotypical "masculine" or "feminine" features — it has the potential to be revolutionary to those who are interested in transitioning. Trans activist and YouTuber Chase Ross tells Salon the photo filter is somewhat of a double-edged sword.

“I think the filter can be good and bad,” Ross said via email. “Good because people who are trans and/or non-binary who aren't able to physically transition because of a variety of reasons (parents no accepting, school, money, etc) — these people are able to use this app, and it gives them a small glimpse as to what they might look like once they are able to physically transition (if that is what they want).”

Brynn Tannehill, a transgender writer and author of "Everything You Ever Wanted to Know about Trans (But Were Afraid to Ask)," agrees. Tannehill tells Salon such a tool could have been useful when she transitioned.

“A lot of trans women in the past have paid money for people’s Photoshop skills and knowledge to do a virtual facial feminization surgery to get an idea of what could be corrected,” she said.

Tennehill said she paid $130 in 2009 to someone who was really good at Photoshop to do a mock-up, but would have used the filter if she were transitioning today.

“This is one of those things, and I’m sure some people early in their transition are using the filter to explore, ‘Where would I be going with my transition and what would it do for me?'” Tennehill said. “It is a benefit when people are given an excuse to explore gender, and think about it in positive ways; I think about everybody knows what their mom would have named them if they were born the opposite sex than the one they were given, but people have also wondered, ‘I this what I would have ended up looking like?'”

As with much of social media, such a well-intentioned piece of technology has the potential to be used in negative or harmful ways.

“It can also be bad [when] you have people making fun of the filters and laughing at ‘men looking like women’ and so on,” Ross said. “Which is a big problem in our society already, trans women (especially trans women of color) are not respected in society... I am scared that these filters might fuel the fire in terms of making fun of trans people.”

“However, I cannot speak to this experience as I am not a trans women of color," Ross noted.

“In terms of the filters themselves, I personally love it,” Ross added. “I love being able to switch my family and friends faces,” though he said that he can “understand [why] some people don't like the gendered stereotype filters.”