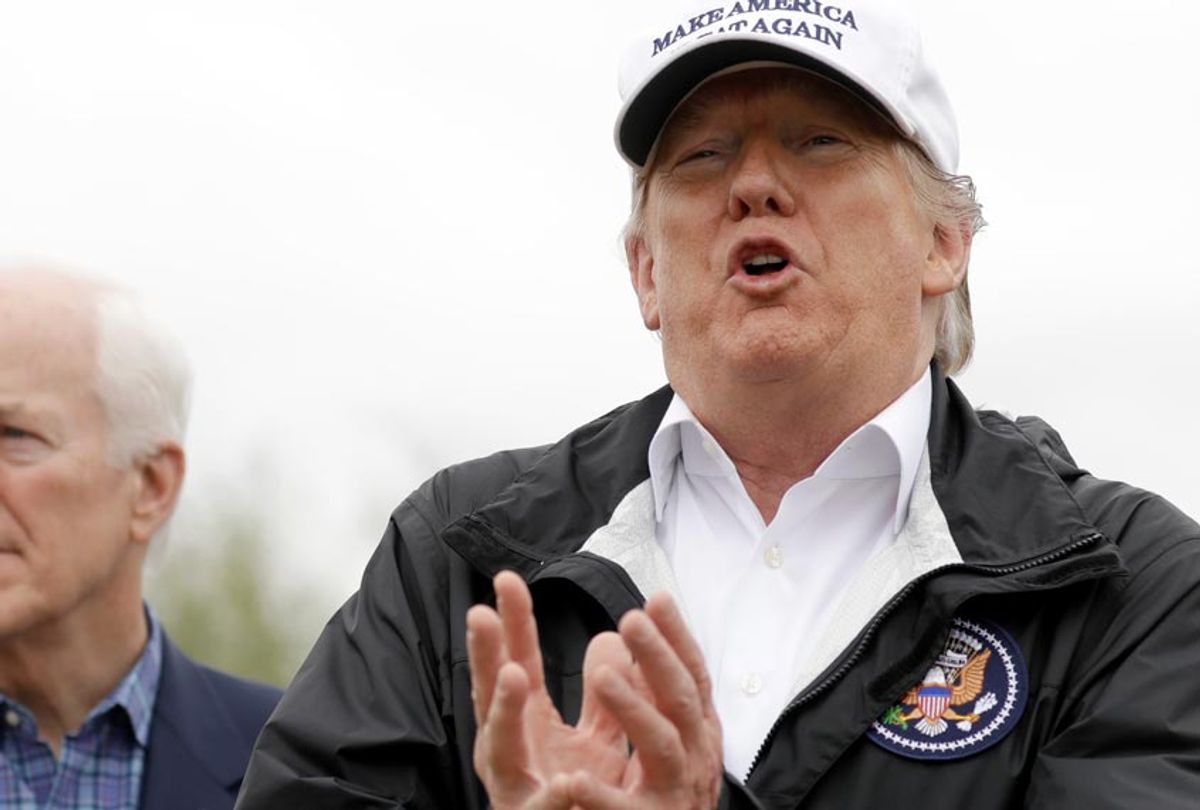 Donald Trump speaks as tours the U.S. border with Mexico at the Rio Grande on the southern border, Thursday, Jan. 10, 2019, in McAllen, Texas. (AP/Evan Vucci)
--

President Donald Trump is hitting back against a recent report which suggests that the deal he worked out with Mexico to avoid tariff increases consisted of measures that had actually been agreed upon months ago.

In a series of tweets posted on Sunday morning, the president wrote that it was "another false report in the Failing @nytimes. We have been trying to get some of these Border Actions for a long time, as have other administrations, but were not able to get them, or get them in full, until our signed agreement with Mexico. Additionally, and for many years, Mexico was not being cooperative on the Border in things we had, or didn’t have, and now I have full confidence, especially after speaking to their President yesterday, that they will be very cooperative and want to get the job properly done."

He added, "Importantly, some things not mentioned in yesterday press release, one in particular, were agreed upon. That will be announced at the appropriate time. There is now going to be great cooperation between Mexico & the USA, something that didn’t exist for decades. However, if for some unknown reason there is not, we can always go back to our previous, very profitable, position of Tariffs - But I don’t believe that will be necessary. The Failing @nytimes, & ratings challenged @CNN, will do anything possible to see our Country fail! They are truly The Enemy of the People!"

The New York Times report denounced by the president argued that key aspects of the trade deal with Mexico had actually been agreed upon by the two nations months earlier.

Friday’s joint declaration says Mexico agreed to the “deployment of its National Guard throughout Mexico, giving priority to its southern border.” But the Mexican government had already pledged to do that in March during secret talks in Miami between Kirstjen Nielsen, then the secretary of homeland security, and Olga Sanchez, the Mexican secretary of the interior, the officials said.

The centerpiece of Mr. Trump’s deal was an expansion of a program to allow asylum-seekers to remain in Mexico while their legal cases proceed. But that arrangement was reached in December in a pair of painstakingly negotiated diplomatic notes that the two countries exchanged. Ms. Nielsen announced the Migrant Protection Protocols during a hearing of the House Judiciary Committee five days before Christmas.

Treasury Secretary Steven Mnuchin has publicly defended Trump's deal with Mexico as well, telling CNBC's Nancy Hungerford that "we’re very excited about the Mexico agreement. We very much appreciate the government working with us on immigration — these are very important issues and they’ve made significant commitments."

He added, "The immigration issue was a very serious issue, we couldn’t be more pleased that Mexico came to the table and negotiated an agreement, and because of that, we don’t need to put tariffs on them."

Mnuchin concluded that Trump reserves the right to impose tariffs on Mexico if bilateral relations between the two countries deteriorate in the future.

The president's plan had been to increase tariffs on Mexican products across-the-board by 5 percent in increments, eventually growing to 25 percent, unless the nation did more to crack down on undocumented immigration. The first major crack in Trump's plan occurred when Republican congressional leaders began to rebel against him, indicating that he could face a humiliating rebuke by his own party if he failed to prevent a crisis that would increase the cost of Mexican goods in the United States.