What happens when a border city's lifeline is brutally severed 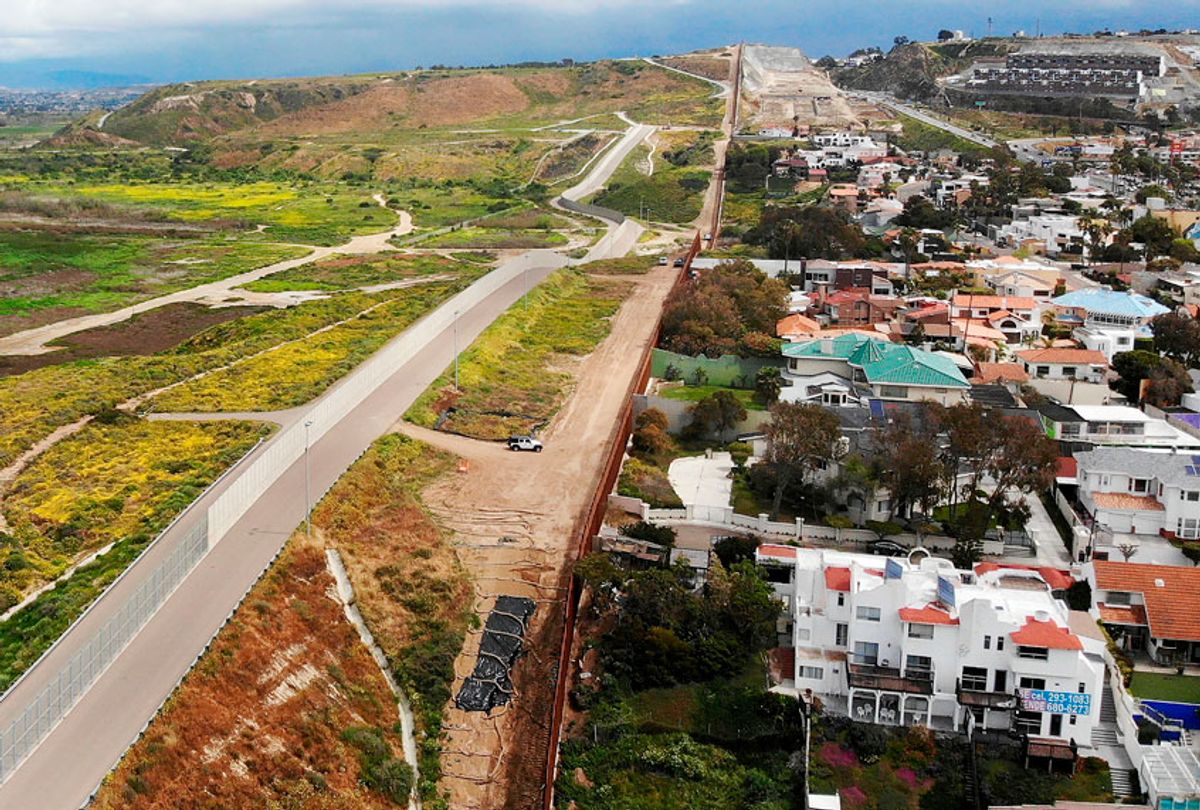 When she finally took the balloons, Rosa didn’t feel the relief she had hoped for. It was a grind to pull together enough money to buy drugs, and the balloons were full of enough crystal meth to keep her withdrawal symptoms at bay for many weeks. Still, the first time the man had offered them, she had declined. “I didn’t want to take them, because I didn’t want to owe him money,” she recalls. “But he left twenty-five balloons anyway.”

Rosa, a sex worker in her fifties living in Tijuana, Mexico, has seen her income decline precipitously over the past few years. Rosa’s story is typical of women who work in the city’s sex trade: first, she was recruited into the trade as a minor (when she was fourteen); and second, she is a migrant, brought here from Guadalajara by a pimp (who died shortly after they arrived). For decades, she and other women like her could rely on a steady stream of clients to Tijuana’s quasi-legal red-light district, located in the Zona Norte neighborhood mere steps from the U.S.–Mexico border wall and San Diego, California. In the early 2000s, Rosa was having sex with 10 clients per day, each of whom would pay 30 or 40 dollars. But that has changed.

So much fuss has been made about a supposed border crisis, depicted as wave after wave of migrants scaling fences to invade the United States. The true crisis at the border, though, isn’t caused by gang-affiliated migrants, but by a policy decision made over a decade ago. In 2008, the George W. Bush Administration announced its support for the Mérida Initiative, a neoliberal experiment meant to wipe out Mexico’s drug cartels. This campaign, carried out by the Mexican military and funded by the United States, has led to hundreds of thousands of drug-related deaths; tens of thousands have also gone missing. Tijuana, a key drug trafficking hub given its proximity to the U.S., has been among the hardest hit by the violence as cartels vie for control of the city’s drug trade.

Despite USD$3 billion in funding, the Mérida Initiative has also led, counterintuitively, to an expansion of the illegal cross-border drug trade. Since 2009, the average purchase price of both heroin and cocaine in the U.S. has decreased, despite the fact that Mexico plays a key part in the traffic of these drugs into the country. In short, the billion-dollar campaign of state-sanctioned violence has done nothing to weaken the cartels.

As an epidemiologist, I track how epidemics move across populations. When I first began work in Tijuana in 2013, my focus was on preventing HIV transmission among Tijuana’s underclass. But what I quickly discovered was that another epidemic was spreading even more rapidly among this group: murder. In 2018, over 2,500 homicides were recorded in Tijuana for a murder rate of 125 per 100,000, in this city of roughly 1.9 million people. (For perspective, Baltimore’s murder rate is 50 per 100,000). This epidemic of boundless violence has replaced the city’s outsized reputation for sex. That has taken a deep toll on the livelihood of the approximately ten thousand women who work in Tijuana’s sex trade, Rosa among them. The greatest blow came in 2009, when new rules forbade the Zona Norte’s most reliable client base—the tens of thousands of U.S. military servicemen stationed in San Diego—from heading to Tijuana on leave because of the violence in the city. Whereas Rosa’s income in the early 2000s hovered at around USD$300 a day, these days she’s lucky to make USD$18. That has led her to look for other ways of making money.

Rosa knows the risks of drug trafficking as well as anyone in Tijuana, having come face to face with narcos among her sex clients. She has experienced firsthand their capacity for violence. But she is also realistic about her declining fortunes in the Zona Norte’s sex trade. The twenty-five crystal meth–filled balloons were a lifeline, at a time when the drug trade has swelled in this border town, making it an increasingly tempting way to make money. “Before it was hidden,” she explains, “but now you can see lines in the streets to buy crystal [meth]…they’re worse than the lines for buying tortillas.”

The dilemma that Rosa faced—make the most of a dwindling income from selling sex, or face potentially fatal consequences from selling drugs—is increasingly common among the thousands of sex workers that service the border region. And it has added a disturbing twist to the epidemic of murder here. In 2000, 15 women were killed in Tijuana, equal to a rate of 2.5 per 100,000. In 2018, 235 women were killed, for a rate of 27 per 100,000. Rosa, like so many here, has been touched by this new epidemic: a year ago, a friend of hers started to dabble in selling drugs, and the results were dire. “[She] was found next to the Vía Rapída a little while ago in pieces,” she tells me, referring to the highway in Tijuana that runs along the border wall. “She was a friend. She used to work here as a sex worker and she injected drugs. But she also used to sell drugs at a bar. And then, she was found killed and cut into pieces.” Rosa’s theory about her death is simple. “She was in withdrawal and stole from the narcomenudistas [drug dealers].”

When women enter the drug market, the narcos treat them just as they treat men: ruthlessly. The fact is, the stakes are so high, with three or more cartels battling it out for control of Tijuana’s drug trade, that the gender of the victims is irrelevant compared to the gargantuan profits to be gained by controlling the market. “You cannot sell drugs where you want,” Rosa explains, “because the cartels have really specific zones and conectas, and they don’t care if you are a man or a woman.”

“They don’t care if you are a woman, they just don’t care,” she repeats like a mantra. “Every conecta [drug-selling spot] has women and kids selling drugs. They have boys and girls; it’s really easy for the narcos to recruit them. Before, you would only see older people selling, like fifty year-olds, or at least people in their twenties or thirties. If you walk during the day or at night, even close to schools, they offer you everything—meth, heroin, everything—and most of them are kids.”

Tijuana has, throughout its history, catered to American vices. The city first found success in the 1920s during American Prohibition, when it made itself an indispensable place for southern Californians to buy booze. Until the 1950s, it was also one of North America’s gambling hotspots until anti-casino laws were relaxed in Las Vegas and Americans had an in-country place to bet. Since then, Tijuana has continued to rely on its one competitive advantage—proximity to the United States—to make itself a preeminent destination to buy sex. Its hold on this last vice, though, may soon end. The violence, along with an American security apparatus that increasingly treats movement across the border as inherently suspicious, are twin calamities for an industry that relies on a large supply of potential clients to both maximize profits and minimize risks to sex workers. In that light, the epidemic of female murder in Tijuana is what happens when attempts are made to sever the natural intimacy between neighbors. The border, after all, is more complicator than separator.

Rosa, initially overwhelmed by her crystal meth addiction, tore open a balloon and began to smoke its contents. She convinced herself that the man who sold them to her was a small-time operator and that the risks were low. The next time she saw him, though, she noticed a gun tucked into his pants. The man, it turned out, was a narco. Rosa, terrified, pulled what money she could together. “I paid him back for the balloons and told him that I didn’t want to sell anymore.” For now, at least, she’ll rely on her meagre earnings in the sex trade to avoid being another female victim of drug violence. As her industry dwindles, though, it’s unclear how long she’ll be able to hold out.

Dan Werb, PhD, is an assistant professor in epidemiology at the University of California San Diego and the University of Toronto. He is the author of "City of Omens: A Search for the Missing Women of the Borderlands."

Dan Werb, PhD, is an assistant professor in epidemiology at the University of California, San Diego and the University of Toronto. His latest book, "City of Omens: A Search for the Missing Women of the Borderlands," was released in June 2019. Werb has received major grants from the National Institute on Drug Abuse, the Pierre Elliott Trudeau Foundation, and other organizations, and has authored dozens of scientific studies investigating HIV, drugs, and deportation in Tijuana. His writing has appeared in publications such as the Believer and the Walrus, where his feature, “The Fix,” on new tactics for treating injection drug use, won a Canadian National Magazine Award. He is based in San Diego and Toronto.