The process of corporate plunder in the global mining industry is aggravating social and economic inequality. 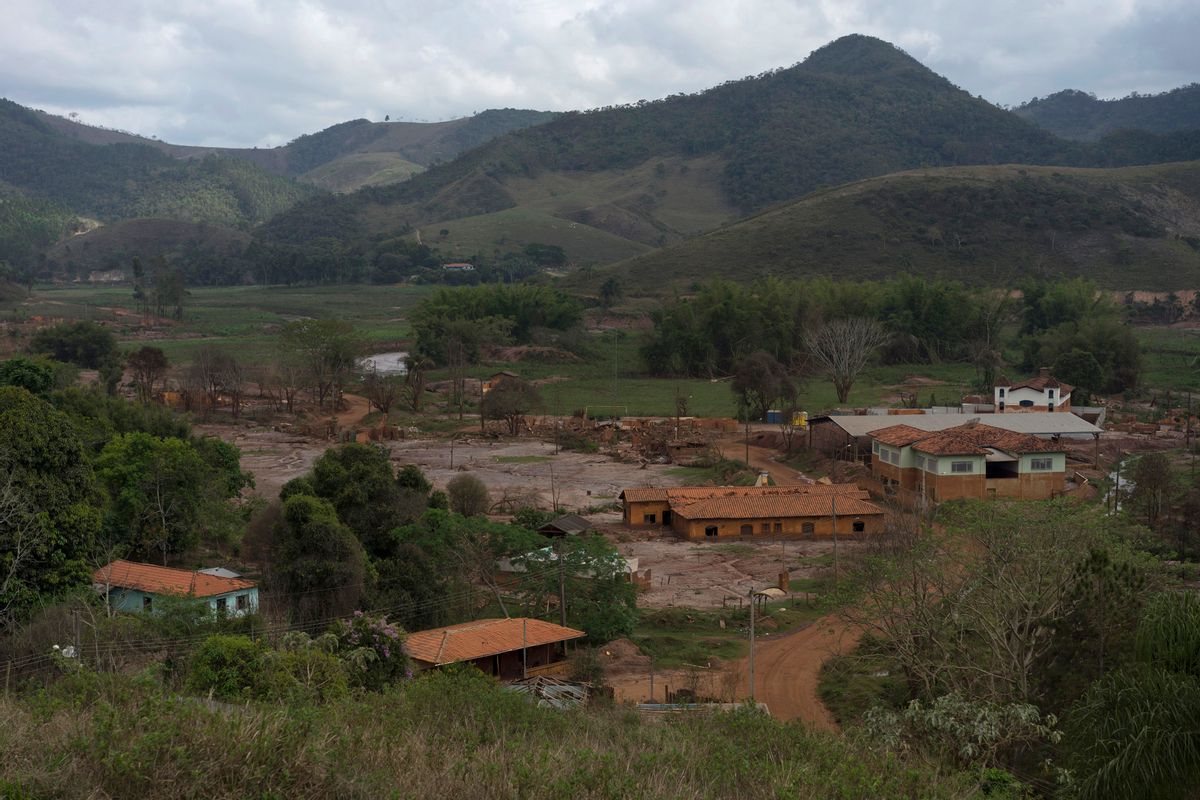 This Oct. 13, 2016 photo shows a view of the hamlet Paracatu, Brazil, destroyed by a mudslide triggered in Nov. 2015, by the failing of a dam at a nearby iron mine. On the other side of the lush mountains miles north of Rio de Janeiro, lies a valley so rich it's believed to hold one of the largest iron deposits in the planet. (AP Photo/Leo Correa) (AP)
--

“The meek shall inherit the Earth, but not its mineral rights.” — J. Paul Getty

The big driver of the world economy is a plundering process where powerful corporations loot the natural resources of low-income countries.

These highly influential multinational corporations (MNCs) facilitate the expatriation of profits and natural assets from resource-rich but capital-poor countries by engaging in a wide range of morally egregious profit maximization practices, such as:

These predatory practices carried out by MNCs deprive developing countries from being able to benefit equitably from their own natural resource supply and ultimately undermine their pursuit of emancipatory economic development policies.

How do systematic underdevelopment and exploitation of developing countries and their peoples occur? Two common strategies of corporate plunder through global extractive industries are rent-seeking and wage exploitation.

Extractive industries are the starting point of the main drivers in the global economy. They deal with the development, extraction, and sale of exhaustible (nonrenewable) natural resources such as the mining of metals and minerals and the extraction of oil and natural gas, according to the Encyclopedia of Environmental Change, edited by John A. Matthews.

Global extraction of natural resources has increased with the onset of the process of capitalist industrialization, growing at an astounding rate in the past 50 years. Global extraction of primary materials more than tripled to 92 billion tonnes in 2017 from 27 billion tonnes in 1970, an annual average growth of 2.6 percent, according to a 2019 report conducted by the United Nations Environment Programme-hosted International Resource Panel (IRP).

For many countries in the Global South, extractive industries are an important aspect of their economy; yet, in many instances, low-income countries only retain a small fraction of the total wealth that is generated from their domestic natural resource production.

The highly capital-intensive nature of the extractive industry requires expensive upfront costs as well as ongoing investment to replace, modernize, and expand equipment and facilities, which forces communities and governments of poor countries to rely on foreign firms for financial assistance.

As a result, such countries are prevented from being able to fully absorb the financial returns generated from their national resource endowments.

The continent of Africa in particular has historically accounted for a significant portion of global extractive production and supply, serving as a catalyst for the economic development of the Global North through low-wage labor and corporate ownership of the region’s natural resources.

Who Controls the Global Extractive and Mining Industries?

Over the past several decades, multinational corporations have emerged as the primary actors in facilitating global trade and natural resource extraction, yielding tremendous profits.

Large corporations, which account for the bulk of international trade and resource extraction, have experienced rising rents under hyperglobalization, leading to heightened profits. This was confirmed by empirical analysis of the largest 2,000 MNCs, which revealed that the share of profits of extractive MNCs rose from 9.3 percent in 1996 to 13.3 percent in 2015.

Meanwhile, a separate study, which measured the influence of corporate power in the global supply chain (GSC), estimated that about 80 percent of global trade (in terms of gross exports) is linked to the international production networks of transnational corporations.

The trade, production and ownership of the extractive industries have become particularly concentrated among a small number of exporters, importers and MNCs.

According to a 2018 study conducted by the United Nations Conference on Trade and Development (UNCTAD) rent-seeking practices by MNCs on the rise in key sectors of the global economy have become a major driver of global income inequality.

The term “rent-seeking” is used by economists to describe a type of profit-making scheme, the sort made possible when individuals or corporate entities are granted exclusive or majority rights to natural and/or non-natural assets.

Thus, the phrase is frequently associated with monopoly (or quasi-monopoly) rent, a form of “unearned” income, which can be generated when large corporate entities exclude competitors from entering the market for the services or products that they supply.

A potential entrant into the global mining market would have to invest at least several billion U.S. dollars to launch a competitive, large-scale mining operation.

Large-scale mining, which accounts for 95 percent of global mining production, is carried out by private corporations with various ownership structures (from publicly traded to state owned) and sizes: companies range from 150 or so “senior” mining companies with over $3 billion in assets to thousands of smaller “junior” companies.

The data above is largely consistent with the findings from a 2018 report carried out by global auditing firm PricewaterhouseCoopers, which showed that the capitalization threshold to rank among the world’s top 40 largest mining corporations is estimated to be at around $5.4 billion.

The capital-intensive nature of the industry poses significant barriers for entry into the market, causing a high degree of market concentration in the global mining sector.

This claim is further supported by a report conducted by Chatham House, which found that jointly, the four largest companies in iron ore, bauxite, and copper mining control 41 percent, 41 percent and 31 percent, respectively, of global mine production.

While a “significant proportion of [corporate] rents has... accrued through monopolies or quasi-monopolies,” as the UNCTAD study reports, some income (rents) can also be generated by what is referred to as “‘political rents’ derived from the ability to influence particular aspects and details of government policies in ways that disproportionately” favor corporate entities.

The recent growth in global corporate rent-seeking practices by MNCs is partially facilitated through what is referred to as the “rentier state,” which is comprised of various public institutions and legal policies, including: cheap exploration permits, flexible labor laws, and low tax rates that benefit the interests of “rentiers” (corporate investors).

Tax revenues, specifically from the mining industry, have tremendous potential to improve the quality of life of citizens, particularly the poorest segments of the population; however, corporate rentiers (MNCs) perceive tariffs and levies as a financial burden that will inevitably reduce their profit margins.

For instance, in 2011, the Konkola Copper Mines (KCM) corporation, which is the “largest private employer in Zambia,” with an estimated 16,000 employees, only paid $105 million in taxes on “its $2.16 billion worth of production, amounting to an effective tax rate of less than 5 percent.”

Sadly, over the past several decades, many mineral-rich rentier-states have entered a downward spiral in an attempt to incentivize foreign investment, offering MNCs low tax rates and favorable production-sharing agreements.

The loss of developing countries’ capacities to retain earnings due to “political rents” accrued by corporate investors has been extensively documented and is particularly evident in the Zambian mining industry.

While not strictly classified as rent-seeking, multinational mining companies engage in yet another form of corporate plunder, which takes place through wage exploitation.

Wage exploitation is a process that ensures increased profit margins for corporate owners and any potential company shareholders, at the expense of workers.

In empirical research conducted by Tricontinental: Institute for Social Research, we observed extensive levels of wage exploitation in the Zambian mining industry, which is one of the world’s most resource-endowed countries with vast mineral deposits.

Despite the county’s immense mineral reserves, our research revealed that in exchange for their labor, many Zambian copper miners are paid next to nothing for their services.

In order to get a sense of wage exploitation and the general labor conditions in the Zambian mining industry, Tricontinental: Institute for Social Research spoke with three non-permanent contract miners working at the Konkola Copper Mines (KCM) owned mine.

In our discussions, all three men reported that their current wages prevented them from being able to fulfill their own basic needs and those of their families.*

“The wages that we receive are well below the cost of the basic food basket” (defined by the World Bank as “the food bundle corresponding to a minimum caloric requirement”). “If you look at our salaries, we are earning no more than US$172 [per month],” Miner 1 told Tricontinental: Institute for Social Research in an interview conducted last January.

In 2018, Zambia’s monthly minimum wage stood around US$176.4, making it the fifth-highest average minimum wage in the Southern African region, according to statistics from the World Bank.

“So, we are actually earning less than the national minimum wage, which makes it nearly impossible to survive,” Miner 1 went on to say.

Technically, it is a legal offense not to meet minimum wage demands; however, penalties are rarely imposed on foreign multinational companies that violate the country’s national labor code.

These miners’ testimonies are largely consistent with the empirical research and the subsequent calculations that we carried out in order to determine wage exploitation in the Zambian mining industry.

Based on the empirical data collected, we observed an extraordinary gap in monetary compensation between the top executives of Vedanta (KCM’s parent company) and the average annual wages earned by KCM permanent contract miners and temporary contract hires.

Labor strikes in Zambia’s mining sector are commonplace. In 2017, business operations for KCM in Chililabombwe were brought to a standstill after workers went on strike over salary adjustments.

“I think that most of us miners believe that companies like KCM are in fact stealing from us. They are stepping on our rights, and as a result we are living in abject poverty,” Miner 2 said when asked about his perception of the multinational mining firms operating in his country.

With nearly 60 percent of the country’s population living below the poverty line, it seems completely reasonable to suggest that Zambian people are deserving of a greater share of the lucrative financial returns generated by their country’s mining industry.

In summary, it is our hope that this research helped illustrate how the combination of both wage exploitation in the context of the Zambian mining industry along with corporate rent-seeking practices in the global extractive sector contribute to the larger pattern of underdevelopment in the Global South.

*For the sake of their physical safety and job security, the three individuals requested to remain anonymous. For the purpose of this text we refer to those quoted as miner 1 and 2.