Trump's tariff tantrum: Another symptom of his massive ignorance

Donald Trump understands nothing about trade or immigration or economics, and is just hoping we won't notice 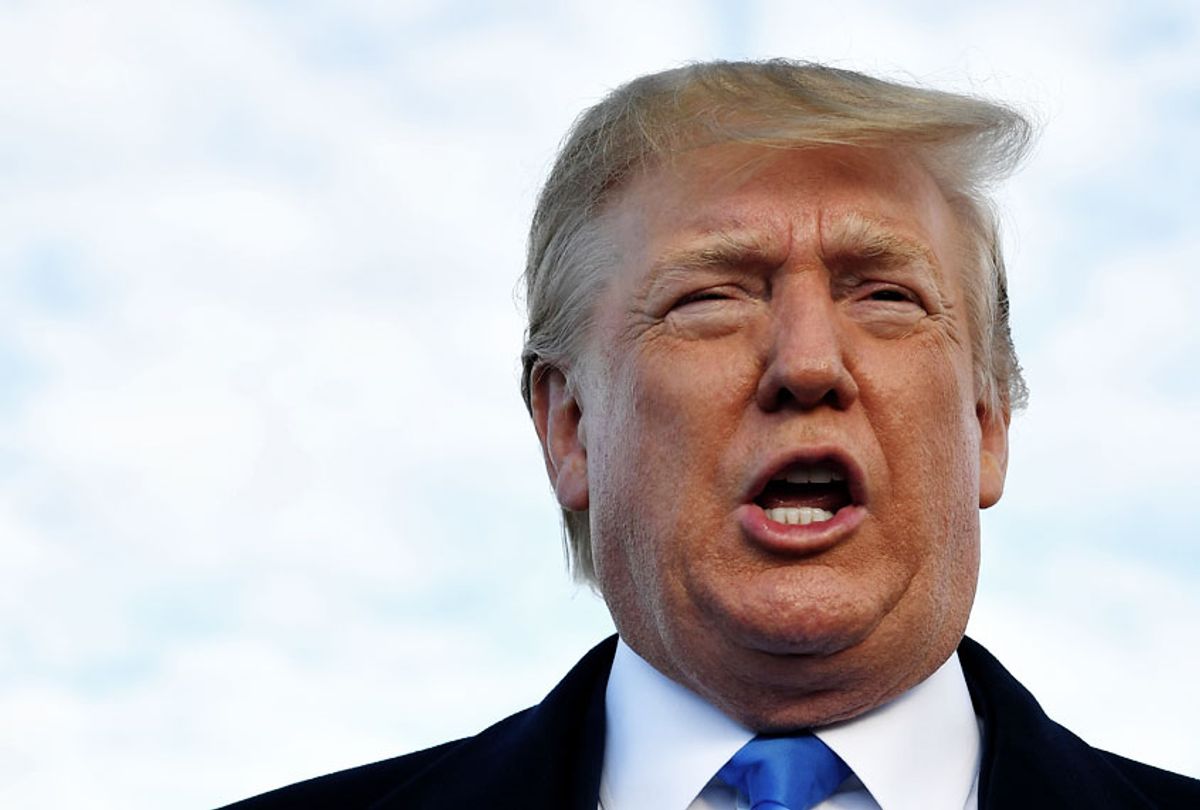 Donald Trump, whose only two modes are sleep and bullying (and he gets very little of the former), is forever trying to browbeat the press into giving him favorable coverage by denouncing them as "fake news" and the "enemy of the people." But even by his rock-bottom standards, Trump hit a new low over the weekend. He freaked out on Twitter, at length, because a few news outlets blew the whistle on his efforts to dupe the public, especially his Fox News-loving base, into believing his massive lies about tariffs and his negotiations with Mexico on immigration.

The attempted dupe is a little complex, but here's a quick explainer: Last month, when some of Trump's minders were out of the White House and he was left alone with Stephen Miller, his virulently racist adviser, Trump announced on Twitter that he planned to punish Mexico for allowing perfectly legal migration into the United States by imposing escalating tariffs. This caused widespread panic among Republicans, who correctly understood that raising prices on American goods and kick-starting a recession would not be good going into the 2020 elections.

But of course the raging narcissist in the White House couldn't just admit that perhaps it was less than wise to tweet out half-baked ideas during a Diet Coke-and-racism bender. So Trump tried to save face by claiming that Mexico had caved into his tariff threats, so now he doesn't have to do tariffs. This was a lie, as was immediately exposed by the New York Times, which reported that most of the concessions on immigration control given by Mexican officials had been agreed to months earlier.

Honestly, this is a situation that would have faded into the background almost immediately if Trump had blown it off. Instead, he threw a Twitter temper tantrum that was extreme even by his standards. He spewed  lies about the deal and declared that the New York Times and CNN — which also reported on his face-saving deception — "will do anything possible to see our Country fail" and are "The Enemy of the People." (As usual, Trump uses "our Country" and "the People" as euphemisms for his own ego.)

So why is our so-called president so wound up over an issue that most people, even his bigotry-blinded followers, don't really care about?

Part of the problem goes right back to how the New York Times and other mainstream media outlets have been covering Trump from the outset. The Times has been relatively soft on Trump, going clear back into the 2016 campaign. And while some Times reporters have done strong work on Trump's long history of corruption, the Gray Lady has also dished up plenty of soft-focus profiles and false equivalencies, and was even instrumental in helping the Trump administration misrepresent the findings of the Mueller report.

In other words, Trump has grown accustomed to the Times elevating his propaganda efforts, and was likely genuinely surprised and offended that they didn't play along this time.

Trump is also furious because this entire incident illustrates that he is not the super-genius he imagines himself to be — and is constantly told he is by enablers like Miller or his former adviser and white nationalist shill Steve Bannon. Trump sees the issues of immigration and trade through his narrow, sociopathic worldview, where all human relations are about domination struggles and every human interaction has a "winner" and a "loser." He is also a deeply incurious person who has no real idea how complex issues like trade and immigration work, so he's constantly screwing up his racist campaign to stick it to foreigners he believes to be inferior people.

From the moment he kicked off his campaign in 2015 by declaring that Mexico was "sending" criminals and "rapists" to the U.S., Trump has based his political career on sticking it to the Mexicans. While his racist base cheers this impulse, what he's largely discovered is that that isn't as easy as he imagined.

Trump's assumption that illegal immigration from Mexico is a significant issue, which like most of his ideas was forged in the 1980s, is flatly false. In fact, there's been a dramatic decline both in undocumented immigrants and Mexicans illegally crossing the border. Instead, the pressing immigration issue right now is that large numbers of Central Americans are seeking political asylum in the U.S., as is their right under international law.

Trump wasn't simply wrong to call immigrants coming over the border "criminals." He was wrong on even more basic facts: He didn't even know the nationalities of the people he was condemning.

Predictably unwilling to admit he was wrong, Trump has been desperately trying to find a way to blame Mexico anyway. So he landed on this idea of holding Mexico responsible for Central American immigrants, employing the super-racist logic that Mexico, a Spanish-speaking country, has more responsibility to deal with Central Americans than the U.S. does. So, in one of his racist bro-downs with Miller, he came up with this idea of "punishing" Mexico for immigrants who aren't actually from Mexico.

Trump, of course, has no idea what tariffs actually do or who they would actually impact, writing that "Mexico will begin paying tariffs" when trying to defend his bizarre idea on Twitter. This is flatly false. The tariffs are an American tax on imports, to be paid by Americans who purchase goods coming over the border. This inability to understand the basic mechanics of how tariffs work has been a persistent feature of Trump's efforts to start trade wars around the world. It remains apparently impervious to repeated efforts by his advisers and others to explain to him that he can't actually levy taxes on the citizens of China or Mexico, no matter how much he wishes he could, and that his tariffs are in fact paid by American consumers.

Again, this appears to be a situation where Trump got it into his head, probably sometime in the '70s or '80s, that "trade wars" would be a cool way to express his desire for drama and domination, especially when it comes to people who aren't white or don't speak English. All efforts to educate him on reality simply cannot overcome his fantasy belief that tariffs are a potent weapon for sticking it to the foreigners.

All of which helps explain why, even after making a big deal out of his false claim that Mexico buckled under his tariff threats, Trump is still threatening to impose them anyway. This isn't about negotiations or about the underlying issues, which Trump doesn't understand anyway. It's about his tough-guy self-image, and how he wants to be seen as a racist bully winning through threats and intimidation. Unfortunately, many of Trump's voters and his propaganda troops at Fox News are just as ignorant, or at least are willing to pretend they are. They love the play-acting at being "tough," even though none of it makes any sense.