Under Obama, the federal government granted permission for all overseas embassies to fly the rainbow flag in June 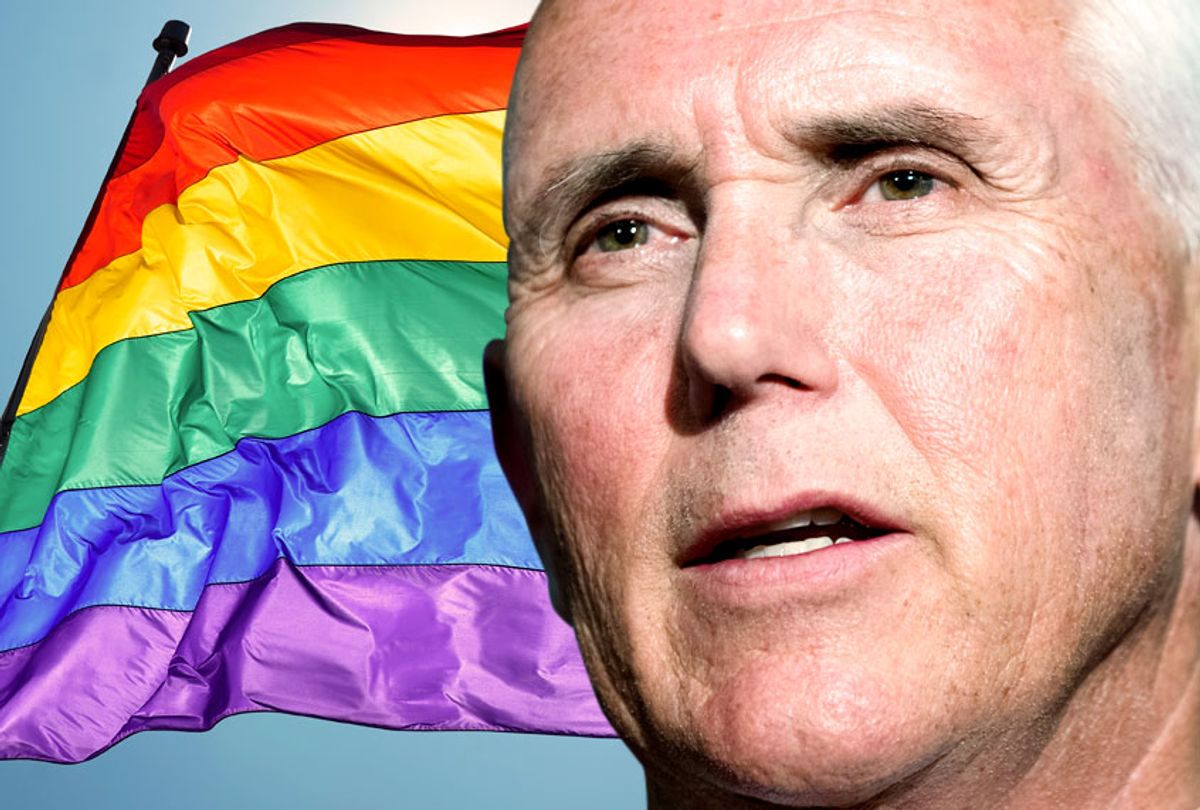 Vice President Mike Pence expressed support for the Trump administration's decision to bar U.S. embassies from flying the rainbow pride flight on their flagpoles during LGBTQ Pride Month, saying "it's the right decision."

"I'm aware that the State Department indicated that on the flagpole of our American embassies that one flag should fly — and that's the American flag," Pence told NBC News. "And I support that."

"As the president said on the night we were elected, we're proud to be able to serve every American," Pence said when asked what he would say to members of the LGBTQ community who may feel as though the administration's decision runs counter to President Donald Trump's recognition of pride month in a tweet earlier this month — something he did not do in the first two years of his White House tenure.

"We both feel that way very passionately, but when it comes to the American flagpole, and American embassies and capitals around the world, having the one American flag fly — I think that's the right decision," the vice president added.

Pence added that the White House "put no restrictions" on the pride flag or other displays flying elsewhere at U.S. embassies.

Under former President Barack Obama's administration, the U.S. government granted blanket permission for all overseas embassies and diplomatic missions to fly the rainbow flag on embassy flagpoles in honor of Pride Month. That policy changed after Mike Pompeo became secretary of state and announced that diplomats must obtain top-level permission from the State Department's Office of Management to fly the pride flag.

Embassies in several countries, including Brazil, Germany, Israel and Latvia, were all reportedly denied requests to fly rainbow flags on the official flagpole, although diplomats were allegedly told they were allowed to display the pride flag in other places, including inside embassies.

Numerous embassies are hoisting rainbow flags outside mission buildings this month, despite advisory from the administration. U.S. missions in South Korea and India are reportedly displaying the flag outside their respective buildings, while embassies in Austria, Chile and Nepal have participated in Pride Month activities.

LGBTQ rights groups and some U.S. diplomatics have raised concerns about the decision, arguing it contradicts the president's public declaration of support for LGBTQ Pride Month.

Earlier in June, Trump pointed to his administration's efforts to decriminalize homosexuality around the world in a tweet. The efforts are being led by the U.S. Ambassador to Germany, Richard Grenell, who is openly gay, and whose requests to fly the pride flag were rejected by the State Department, according to NBC News.

Trump, who has attempted to break with Republicans by campaigning as a "real friend" to the LGBTQ community, has faced sharp criticism from lawmakers and leading gay rights groups, who have argued the president's policies are inconsistent with his supposed beliefs.

They have pointed to the Trump administration's decision to bar transgender service members from enlisting in the U.S. military. The president defended that policy last week while visiting the United Kingdom, claiming that transgender people "take massive amounts of drugs" in an apparent reference to hormones.

The White House has also proposed a rule that would roll back an Obama-era policy prohibiting health care providers from discriminating against patients who are transgender. The regulation would scrap Obamacare's definition of "sex discrimination" to remove protections for gender identity.

Additionally, the Department of Housing and Urban Development proposed a rule earlier this month that would allow federally funded homeless shelters to deny services to transgender people for religious reasons.

"If the president truly believes in his administration's campaigns to end global LGBTQ criminalization . . . then he should recognize those LGBTQ Americnas who fought and died for these ideas to even be possible during Pride Month and throughout the year," said Sarah Kate Ellis, CEO of LGBTQ advocacy organization GLAAD, in response to the administration's latest actions.