Mitch McConnell and Elaine Chao's empire of corruption: Is this what "normal" looks like, Joe Biden? 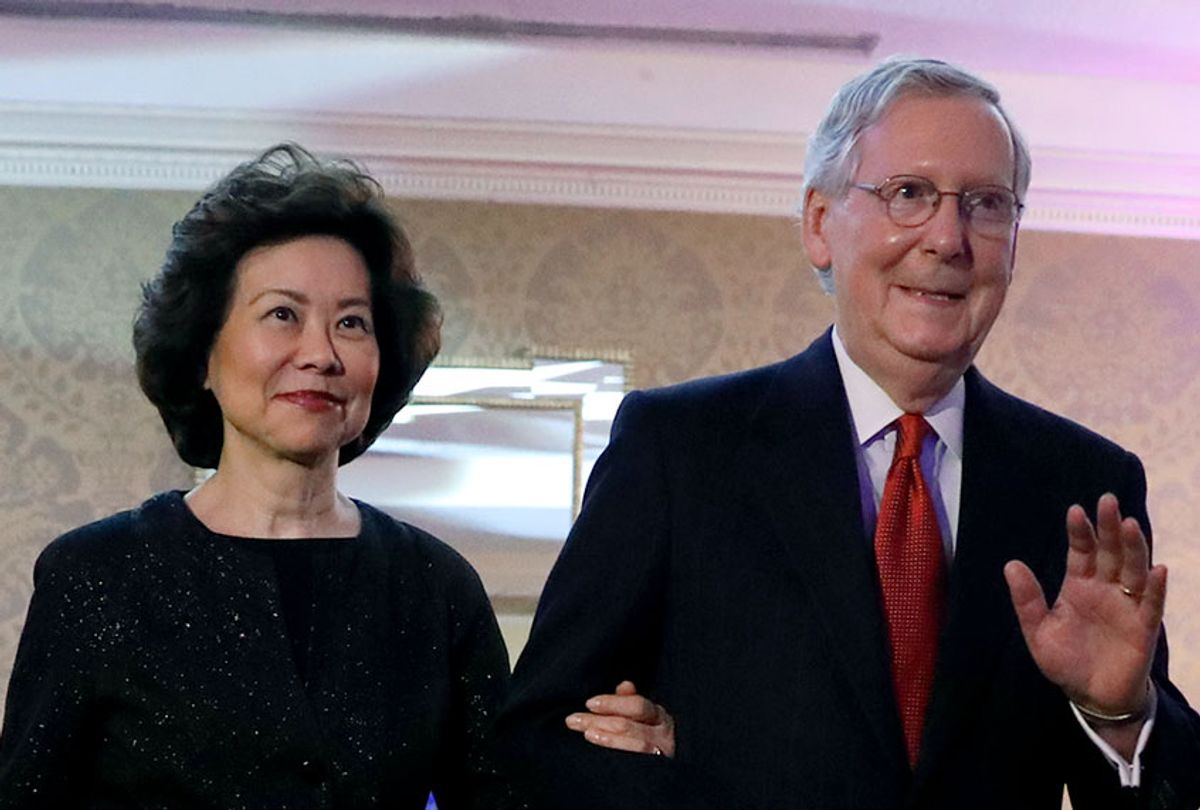 There is a lot of discussion in Democratic circles these days about whether or not American politics will go back to "normal" once Donald Trump is out of the picture. This issue has been raised most recently by former Vice President Joe Biden on the campaign trail. He has said that Republicans will have an "epiphany" once Trump is gone because deep down they know how wrong they've been and they will revert back to their sane selves. According to the Washington Post, Biden said this to a group in Washington on Monday night:

With Trump gone, you’re going to begin to see things change. Because these folks know better. They know this isn’t what they’re supposed to be doing.

Biden is pretty much alone in that belief, but since he's the apparent Democratic frontrunner, the debate must necessarily take place. There is reason to think that what he's saying is something a lot of people want to hear. It's understandable. They yearn to believe that Trump is an aberration and that our politics will somehow become something recognizably decent once he's gone. Unfortunately, good old "Uncle Joe" is making promises he can't keep.

And he's doing it in the weirdest way possible. At the event at which Biden was quoted saying the above, the pool report followed up with this:

Biden backed up the claim by recalling when he called 12 of his former Republican colleagues after Merrick Garland’s SCOTUS nomination was blocked by McConnell and they all expressed external concerns, he said.

Yes, you read that right. Biden used the example of Republicans privately expressing concern about one of the most outrageous acts of successful congressional obstruction in history to illustrate how reasonable they are.

Biden is just wrong about this. As someone who was an integral part of the Obama administration, he should know better. He participated in the Obama team's tortured attempts at a Grand Bargain with then-House Speaker Paul Ryan, when they got snookered over and over again until they finally woke up to the fact that the Republicans were not acting in good faith.

The Republican Party went over the cliff quite some time ago and there is no evidence at all that it is prepared to climb back up. For that we can thank a lot of people, from Rupert Murdoch to the Tea Party, but none so much as Senate Majority Leader Mitch McConnell. Even more than Trump himself, McConnell exemplifies the degradation of the GOP.

Recent reporting shows that he's like the president in some ways that may surprise people. McConnell is not only a ruthless partisan, he also appears to be taking full advantage of the chaos and corruption of the current era to enrich himself personally. His partner in that endeavor is his wife, Transportation Secretary Elaine Chao. And what a partnership it is.

The New York Times reports that Chao has blatantly leveraged her position in Trump's Cabinet to benefit her family's shipping business, the Foremost Group. In 2017, she had planned a visit to Beijing, ostensibly on government business, and has also arranged for members of the family to attend government meetings. This so alarmed the U.S. embassy that staffers there got in touch with the State Department to find out how to handle it. That visit was canceled, but according to this Politico article published last month, Chao has held at least a dozen interviews with Chinese media, with her father by her side, clearly associating his business with her position as transportation secretary.

Chao herself is not officially part of the Foremost Group's management team, but her father and other members of her family have given millions to McConnell's campaigns over the years. In turn, they have benefited greatly from their connection to the American political elite:

Over the years, Ms. Chao has repeatedly used her connections and celebrity status in China to boost the profile of the company, which benefits handsomely from the expansive industrial policies in Beijing that are at the heart of diplomatic tensions with the United States, according to interviews, industry filings and government documents from both countries. Now, Ms. Chao is the top Trump official overseeing the American shipping industry, which is in steep decline and overshadowed by its Chinese competitors.

Trump and his spawn could only dream of such an effective scam. Not only is it corrupt to the core, it's downright unpatriotic.

Elaine Chao isn't just doing favors for her family business. She's helping out the hubby as well. In a separate report this week, Politico reported that "Chao designated a special liaison to help with grant applications and other priorities from her husband Mitch McConnell’s state of Kentucky, paving the way for grants totaling at least $78 million for favored projects as McConnell prepared to campaign for reelection." That liaison is now Chao's chief of staff. When asked about the report, McConnell smugly responded, “I was complaining to her just last night, 169 projects and Kentucky got only five. I hope we’ll do a lot better next year.”

Never let it be said that McConnell himself isn't doing his part to ensure the corruption of the Republican Party. He may be leaving the personal bagman duties to his wife but he's using every means in his power to ensure that the 2020 election remains as unsafe and vulnerable as it was in 2016. (You will recall that he was personally responsible for the government not warning the public about Russian interference — a story for which Joe Biden was the main source.) McConnell remains committed to blocking all election protection bills in the Senate, even those sponsored by Republicans. And he isn't one to turn down voting-machine lobbyist money, either.

McConnell continues to pack the courts with right-wing judges at a frenzied pace and has made it clear that he will fast-track Donald Trump to acquittal in a Senate trial, should the House impeach him. If Mitch is not be technically guilty of obstructing justice, he's doing it just as much as the president is.

Someone should alert Joe Biden that when McConnell was asked what he would do if another Supreme Court vacancy opened up during the last year of Trump's term, he just took a gulp of water and said with a barely suppressed smirk, "We'd fill it."

Mitch McConnell is the real leader of the Republican Party, not Donald Trump. It turns out that he is just as unethical, even down to the foreign business entanglements and self-dealing.  Joe Biden claims that McConnell and other leading Republicans know they shouldn't be doing this stuff. He may be right: Most likely they just don't care.