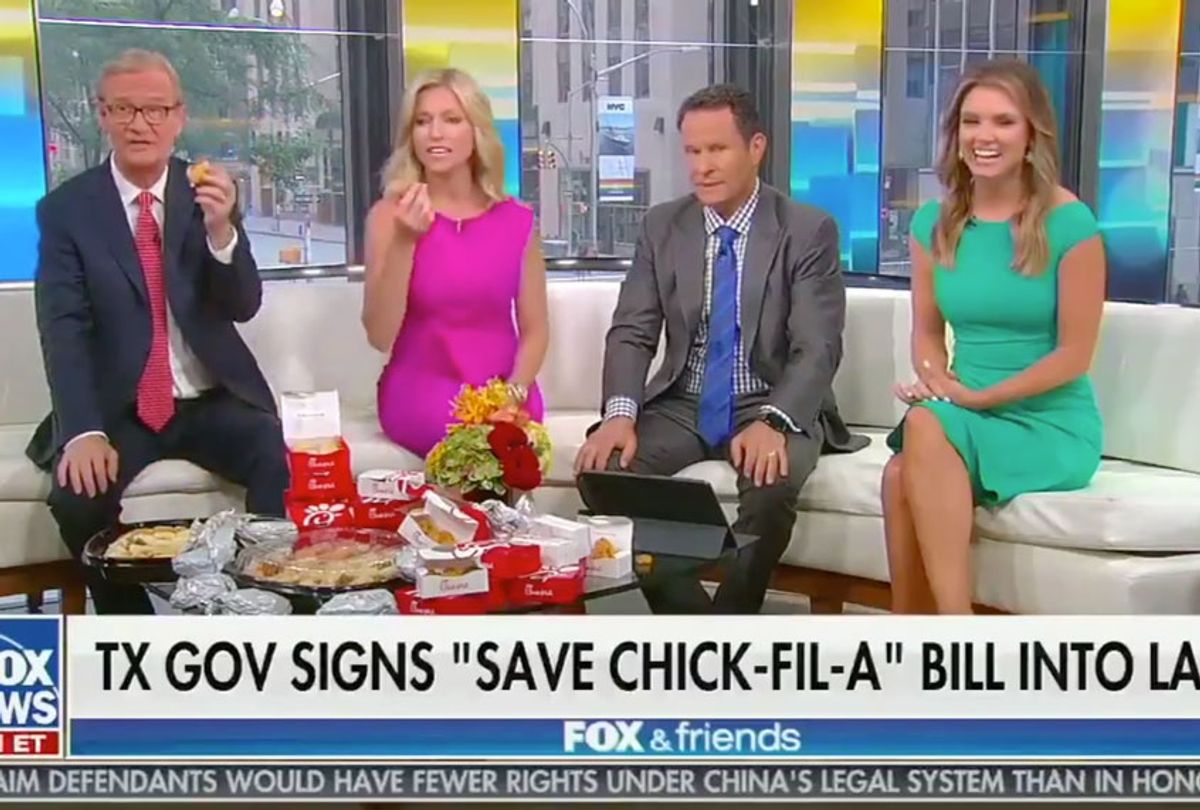 A new piece of legislation signed by the governor of Texas claims to advance religious freedom, but according to critics, it will actually enshrine the ability to discriminate against the marginalized LGBTQ community into law.

The law, known as Senate Bill 1978, was signed into law by Gov. Greg Abbott on Tuesday in the middle of Pride Month. "The measure prohibits the government from taking 'adverse action' against any individuals or businesses based on membership, support or donations to religious groups," according to CNN.

Although the so-called "Save Chick-fil-A" law does not include language that permits the Texas attorney general to take action against government employees and entities who violate it — yes, that was originally case — critics still believe it will open up members of the LGBTQ community to discrimination.

In March, the city council of San Antonio insisted on excluding Chick-fil-A from a new concessions contract for the city's international airport. "San Antonio is a city full of compassion, and we do not have room in our public facilities for a business with a legacy of anti-LGBTQ behavior," Roberto Treviño, the city councilman who made the motion, said at the time. Texas Attorney General Ken Paxton later announced an investigation into whether San Antonio had violated Chick-fil-A's religious freedom by excluding it.

The LGBTQ rights group Equality Texas denounced the bill in a series of tweets on Tuesday.

"Governor Abbott signed SB 1978, the so-called 'Save Chick-fil-A' bill, into law today. This bill is nothing more than an 'anti-LGBTQ dog whistle'," the first tweet said.

The pair that followed continued, "Here’s what you need to know about SB 1978... 1. This bill does not materially change current law in Texas. It simply reaffirms First Amendment protections. 2. This bill is the brainchild of anti-LGBTQ national and state-level activists. Even though it does not take away the rights of LGBTQ people, it does advance the message that anti-LGBTQ views deserve special protections."

The hosts of "Fox & Friends," President Donald Trump's favorite morning show, also showered praise on Abott's decision to sign the bill into law as they ate from a buffet of Chik-fil-A food.

"The bill is to protect private entities from punishment over actions they take due to their religious beliefs," Steve Doocy said.

Ainsley Earheart, his co-host, added, "So San Antonio airport — I used to live there, flew into that airport all the time — and they have obviously restaurants, their food court. And Chick-fil-A wants to move in there. Well, the area lawmakers — the local lawmakers said no, because there is some controversy with this restaurant. Whether or not — what their beliefs are on LGBT — and so they voted, 'No.' Well, it went all the way to the governor's desk, and he just signed it."

The fast-food franchise years ago became a gay rights battleground — with scores of celebrities, politicians and even muppets getting involved.