"In terms of getting the 9/11 bills passed, Mitch McConnell has been the white whale of this since 2010" 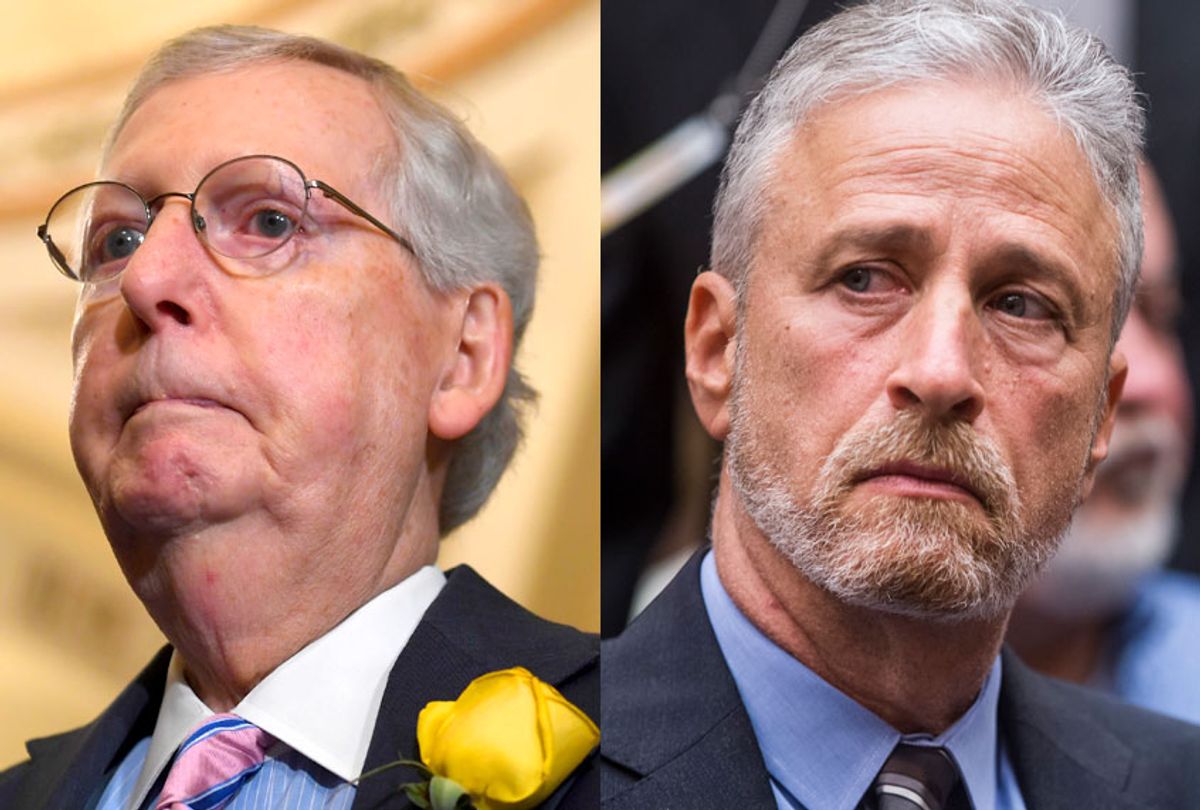 "In your testimony, you said that a certain someone, by which it appeared that you meant Senate Leader Mitch McConnell, cannot be allowed to use this as a 'political football' in the negotiations on other spending bills," anchor Chris Wallace asked Stewart on "Fox News Sunday." "Have you had problems with Sen. McConnell?"

"Uh, yes. I mean, not me personally, but in terms of getting the 9/11 bills passed, Mitch McConnell has been the white whale of this since 2010," Stewart told Wallace. "In 2010, and this brings up something, because I think it's the cynicism that's displayed by Washington that also causes this situation to be so emotional. They asked Mitch McConnell about the testimony after it was done, and he said, 'Oh, gosh'— I think he used the word 'gosh' — 'gosh, we haven't looked at that in a while, but we will look at it, and I'm sure we'll deal with it as compassionately as we have in the past.'"

"But I want to make it clear that this has never been dealt with compassionately by Sen. McConnell," Stewart added. "He has always held out until the very last minute, and only then under intense lobbying and public shaming has he even deigned to move on it."

However, Stewart said this is one issue that extends beyond partisan battle lines.

"This is not a Republican-Democrat issue," Stewart explained. "There are Republicans on the bill. We'd obviously like to have more of them. But Sen. McConnell has seen fit to — in 2010, he used it to make sure that the Bush tax cuts would be permanent. In 2015, he took it out of the transportation bill, because he wanted to extract some promises on oil imports. And so, in this bill right now — 2019 — he's been aware of this. We were told in August that this fund was running out of money, and that people were gonna have their awards slashed by 30, 50, up to 70 percent."

Stewart took part in a viral moment last week when he testified before a congressional committee on behalf of a bill to help the men and women who responded to the 9/11 terrorist attacks. He was outraged there had been delays in bringing about a fair resolution to funding issues involving the compensation fund.

During his testimony, he said, "I'm angry and you should be, too.

In a state of near tears, Stewart told Congress that the 9/11 responders "responded in five seconds — they did their jobs with courage, grace, tenacity, humility."

"Eighteen years later, do yours," he continued.

As a result of Stewart's testimony, Congress has started to move forward to deal with issues involving the Victim Compensation Fund.