Electric cars are still better for the environment. But lithium mining has some problems 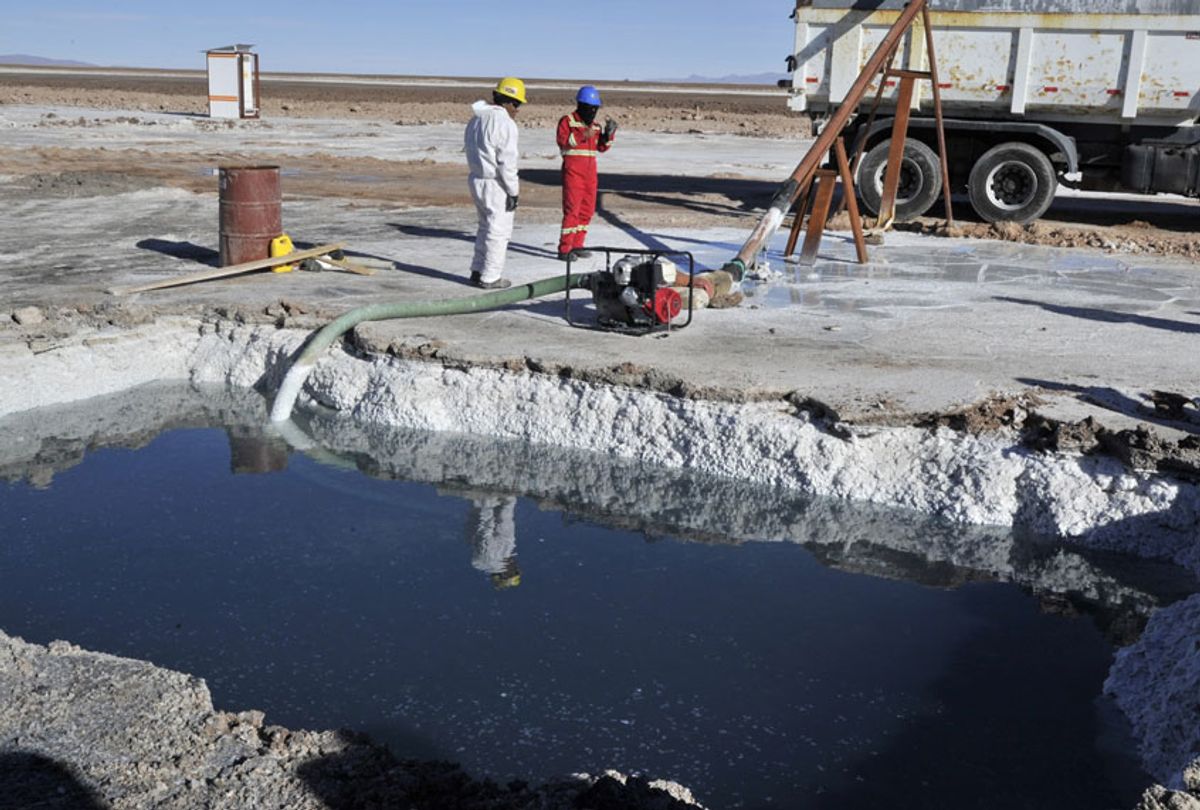 Cars and trucks account for nearly one-fifth of all carbon emissions in the United States, according to the Union of Concerned Scientists. Fossil-fuel vehicles emit an average of 24 pounds of carbon dioxide and other hazardous gases for every gallon of gas consumed. On the surface, emission-free electric cars might seem a significant improvement.

Yet other regions of the world will suffer as humanity transitions to electric cars. Specifically, mining for lithium — the essential element for batteries used in many electric cars, as well as other portable electronics — is wreaking havoc on the world's deserts.

Lithium is found in the brine of salt flats. In order to obtain lithium, holes are drilled into the flats to pump the brine to the surface. This allows lithium carbonate to be extracted through a chemical process.

Last week, Bloomberg published a report detailing how the boom in lithium mining is irreversibly destroying the local environment of northern Chile’s Atacama desert. Mining for lithium means means removing large amounts of water, which means depleting the water supply for locals. According to the report, the Tilopozo meadow in Chile used to be a shelter for shepherds traveling at night, yet has become barren due to lack of grass or water. That puts a severe strain on local farmers.

“We’re fooling ourselves if we call this sustainable and green mining,” Cristina Dorador, a Chilean biologist, told Bloomberg. “The lithium fever should slow down because it’s directly damaging salt flats, the ecosystem and local communities.”

Cairn Energy Research Advisors estimates the lithium ion industry is expected to grow from 100 gigawatt hours (GWh) of annual production in 2017 to 800 GWhs in 2027—not only as a result of electric cars, but also because lithium is used in batteries to power various electrical and electronic goods, including mobile phones. Much of this will be mined from the South America’s Lithium Triangle, which spans across Argentina, Bolivia and Chile, an area that is said to hold more than half the world’s supply of the metal beneath its salt flats. Another major deposit comes from Australia.

“One of the biggest environmental problems caused by our endless hunger for the latest and smartest devices is a growing mineral crisis, particularly those needed to make our batteries,” Christina Valimaki an analyst at Elsevier, told UK’s Wired.

One of the side effects of lithium mining is water pollution: the process of mining can affect local water supplies, potentially poisoning communities. Yet chemical leakage is also a major concern when it comes to lithium mining. The lithium carbonate extraction process harms the soil, and can cause air pollution. There are also concerns around how to recycle it. Eco-nonprofit Friends of the Earth notes that lithium recycling is fraught, as the metal is “toxic, highly reactive and flammable.”

“It tends to be incinerated or ends up in landfill due to very low collection rates and flawed waste legislation,” Friends of the Earth states in their lithium factsheet. “Low collection rates, the low and volatile market price of lithium, and the high cost of recycling relative to primary production have contributed to the absence of lithium recycling.” The organization recommends further social and environmental impact assessments should be made.

Yet does that mean that electric cars are equally destructive as fossil-fueled ones? Certainly not. But the idea that electric cars, or anything with lithium batteries, are entirely "green" might not be true. And as demand rises, the hidden costs will become more apparent.