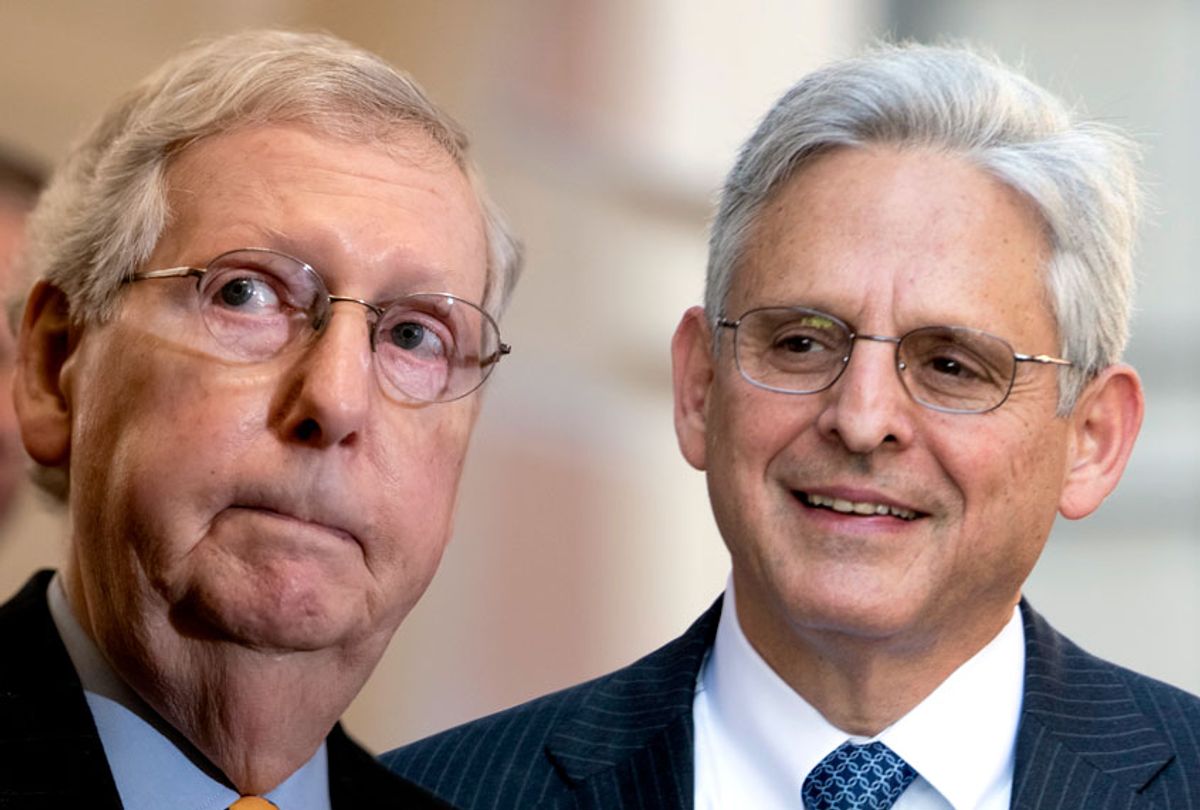 Senate Majority Leader Mitch McConnell told the hosts of "Fox & Friends" Monday that he would "absolutely" push through a possible Supreme Court nominee before the outcome of the 2020 election — even though Republicans cited the upcoming presidential election in 2016 when they refused to consider Merrick Garland's appointment by former President Barack Obama.

"Senator, you had your legacy on judges — with President Trump — is going to be terrific getting constitutional judges appointed to the court," said guest co-anchor Don Bongino. "If another seat opens on the Supreme Court: Are you going to push that through?"

"Absolutely," McConnell replied. "You know, the precedent that people ignored back in 2016 when I made the decision not to fill the vacancy during the middle of a presidential election was: Who controlled the Senate?"

McConnell then added, "You have to go back to 1888 to find the last time a Senate of a different party from the president confirmed a vacancy to the Supreme Court that occurred during the presidential election — makes sense. We will still control the Senate next year. If there were to be a vacancy, of course, we would fill it."

McConnell has courted considerable controversy for reversing the position he took in 2016 about the hypothetical scenario for 2020. During a Chamber of Commerce luncheon in Kentucky last month, an attendee asked the senator, "Should a Supreme Court justice die next year, what will your position be on filling that spot?"

McConnell took a long sip from his beverage before reportedly smiling and saying, "Oh, we'd fill it."

He later elaborated on his position by saying, "I remember during the tax bill, people were agonizing over whether one part of the tax bill was permanent or not. I said, 'Look, the only way the tax bill is permanent depends on the next election.' Because people have different views about taxes in the two parties, and they approach it differently when they get in power."

He added, "What can't be undone is a life time appointment to a young man or woman who believes in the quaint notion that the job of the judge is to follow the law. That's the most important thing we've done in the country, which cannot be undone."

While the audience reportedly laughed audibly, the Democratic leader in the Senate was decidedly less amused, calling McConnell "a hypocrite."

Senate Minority Leader Chuck Schumer responded to McConnell's comment by tweeting, "Senator McConnell is a hypocrite" and later added, "Seriously it’s no surprise. @SenateMajLdr McConnell lives for GOP judges because he knows the GOP agenda is so radical & unpopular they can only achieve it in courts. Anyone who believes he’d ever allow confirmation of a Dem President's nominee for SCOTUS is fooling themselves."

At the time of Justice Antonin Scalia's unexpected death in 2016, McConnell argued that he was refusing to consider Garland's appointment by Obama, because he thought that the American people should be able to decide with their vote.