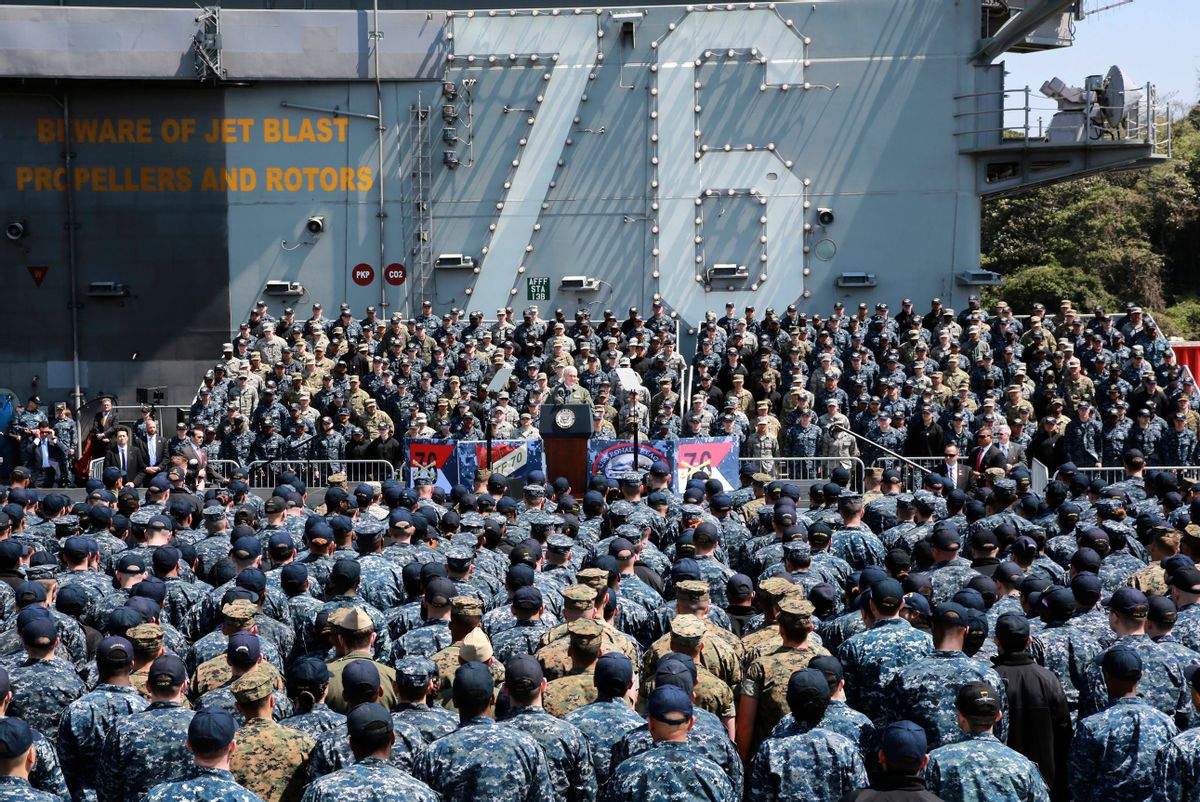 Trump says he loves our soldiers, but his team is helping shady lenders pick the pockets of our military.

Mick Mulvaney, who took $55,000 in campaign contributions from the payday-loan industry when he was a South Carolina congressman, decided that the agency set up to protect consumers should turn a blind eye to fleecing our nation’s soldiers. Mulvaney’s successor to lead the Consumer Financial Protection Bureau, Kathleen Kraninger, agrees.

“Over time, it is going to have a real impact on the lives of these people who devote their lives to the service of our country,” said Christopher Peterson, a law professor at the University of Utah.

Payday lenders cluster near major military bases like "bears on a trout stream."

Our nation’s military is unusually vulnerable to financial exploitation. They are often young, move frequently and are sent overseas. Payday lenders cluster near major military bases like “bears on a trout stream,” according to a 2005 study. In 2017, there were 14,348 payday-loan offices in our country, about the same number of Starbucks locations and more than the number of McDonald’s restaurants.

Former President George W. Bush signed the Military Lending Act in 2006 to try to protect our nation’s soldiers. The act caps annual interest rates on consumer loans for the military at 36%. The Consumer Financial Protection Bureau, created in 2010, examined large banks, payday lenders and other financial institutions to look for lenders that preyed on our military.

In 2012, the bureau examined Cash America International and found that its subsidiary, Enova, made 362 payday loans to active-duty military members or their dependents that had interest rates higher than 36%. Cash American was fined $5 million for that and other violations.

Mulvaney, the bureau’s former acting director, halted those exams in 2018 without notifying the Pentagon although the bureau still can act on complaints. Mulvaney argued that the Military Lending Act was not a consumer financial protection law and that the law setting up the bureau didn’t give it the authority to do exams to protect the soldiers who guard our nation’s security.

Enova, which separated from Cash America in 2014, contributed $25,000 to Trump’s inaugural committee. A trade group for the payday-loan industry, Community Financial Services Association of America, held its annual conference in 2018 at a Trump hotel in Florida.

Kraninger appears to be interpreting the law differently than the agency’s own top lawyer, Mary McLeod, who wrote that under one possible reading of the law “the bureau may seek to uncover and remedy violations of the MLA.” Kraninger wantsCongress to pass a bill, H.R.442, to say the bureau can examine firms to see if they comply with the Military Lending Act, but Democrats are worried that Republicans would use the bill to try to water down consumer protections.

The bill is sponsored by Rep. Andy Barr (R-Ky.) whose top campaign contributors are from securities and investment firms.Auto lenders and dealerships have been lobbying the bureau to loosen the 36% cap.

In 2005, the year before the act passed, the Navy-Marine Corps Relief Society made $987,077 in loans or grants to 1,509 service members who had taken out payday loans and were struggling financially.