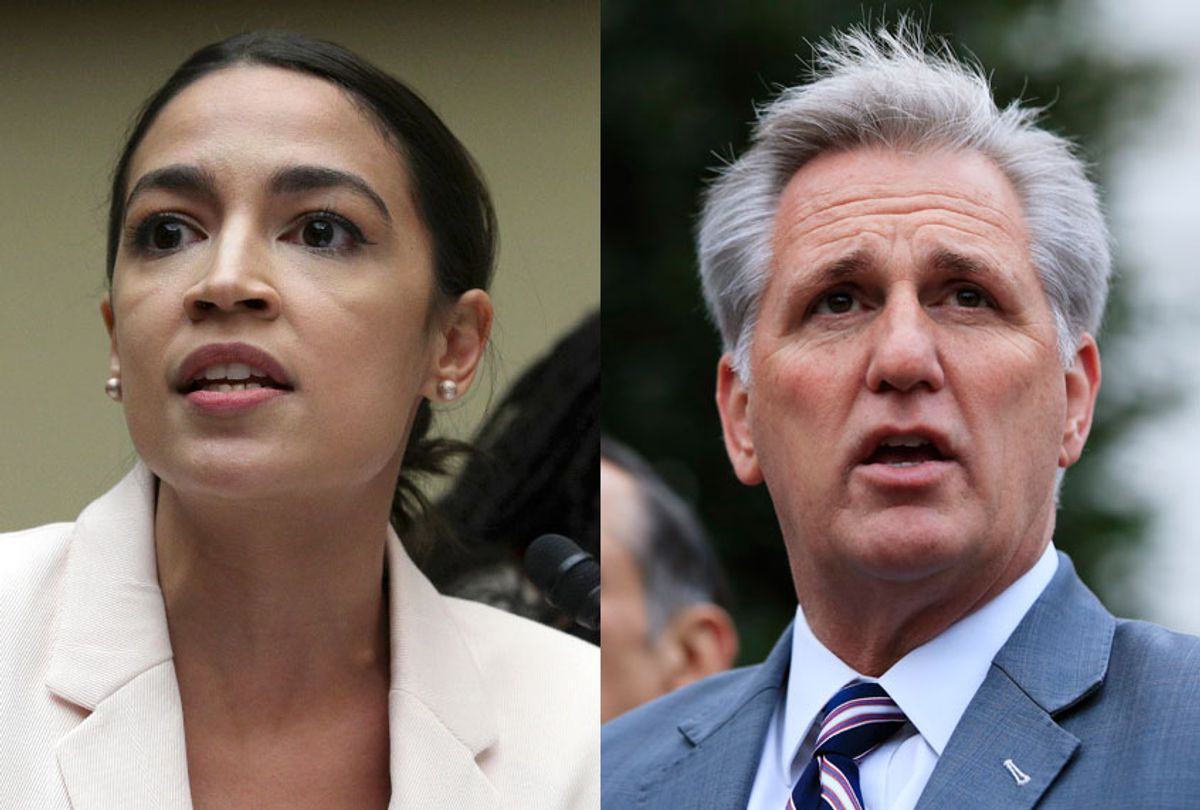 The Republican Party's leader in the House told reporters that the freshman representative owed not only the U.S. an apology but also the whole world for equating detention facilities operated by the Immigration and Customs Enforcement (ICE) to Holocaust era concentration camps throughout Europe, where millions of Jews were brutally murdered.

"I think Congresswoman AOC needs to apologize," McCarthy said, referring to Ocasio-Cortez. "Not only to the nation but to the world. She does not understand history."

"She does not understand what is going on at the border at the same time. But there is no comparison . .  . and to actually say that is embarrassing," McCarthy continued. "To take somewhere in history where millions of Jews died . . . and equate that to somewhere that's happening on the border . . . she owes this nation an apology."

His remarks came after Ocasio-Cortez sparked a political firestorm after she declared in an Instagram video Monday night that detention centers housing undocumented migrants who have crossed into the U.S. are "exactly" like concentration camps.

"The U.S. is running concentration camps on our southern border ⁠— and that is exactly what they are," Ocasio-Cortez said Monday night in an emotional Instagram live video.

"I want to talk to the people that are concerned enough with humanity to say that 'Never again' means something," she continued. "The fact that concentration camps are now an institutionalized practice in the 'Home of the Free' is extraordinarily disturbing, and we need to do something about it."

Ocasio-Cortez noted that migrant children were taken this week to the same concentration camps where people of Japanese ancestry were held in during World War II. Camps were established at the time in states with large Japanese-American populations, such as California, Washington and Oregon.

Last week, the federal government announced plans to place as many as 1,400 migrant children in makeshift housing on Fort Sill Army installation in Oklahoma, which was used during WWII as an internment camp for Japanese-Americans. The Office of Refugee Resettlement (ORR) said in a statement that the Fort Sill was previously used to house unaccompanied migrant children in 2014.

In addition to Fort Sill, the agency said in its statement that it is also considering housing unaccompanied migrant children at the Santa Teresa Land Port of Entry in New Mexico, because existing shelters are at capacity.

In her live video, Ocasio-Cortez said the issue is not just about migrants.

Her video drew swift condemnation from top Republicans, who argued the comparison to the Holocaust was not appropriate.

"Please @AOC do us all a favor and spend just a few minutes learning some actual history. 6 million Jews were exterminated in the Holocaust," tweeted Rep. Liz Cheney, R-Wyo., the third-ranking House Republican.

Sen. Lindsey Graham, R-S.C., claimed Ocasio-Cortez was "not lifting a finger to solve the problem" at the border and doing a disservice to "the men and women serving our country" by comparing them to concentration camp guards.

Jewish groups also criticized the congresswoman remarks, urging the lawmaker to refrain from comparing migrant detention centers to concentration camps in the future.

"As concerned as we are about the conditions experienced by migrants seeking asylum in the United States . . . the regrettable use of Holocaust terminology to describe these contemporary concerns diminishes the evil intent of the Nazis to eradicate the Jewish people," the nonpartisan Jewish Communities Relations Council of New York, which represents over 60 Jewish organizations, wrote Tuesday in a letter to Ocasio-Cortez.

Ocasio-Cortez has defended her remarks, which have been praised by some Democrats and even actor and activist George Takei, who was interned by the U.S. government alongside fellow Japanese Americans during World War II.

Sen. Brian Schatz, D-Hawaii, said American Jews are "disgusted by the cruel treatment of children and families at our southern border."

The lawmaker, who is Jewish, tweeted Tuesday night: "If you want to show solidarity with American Jews, help us to stop this, and don't feign outrage at the language that people use to describe this tragedy."