Harris criticized Biden's comments as "misinformed and wrong," while Booker called for an "immediate apology" 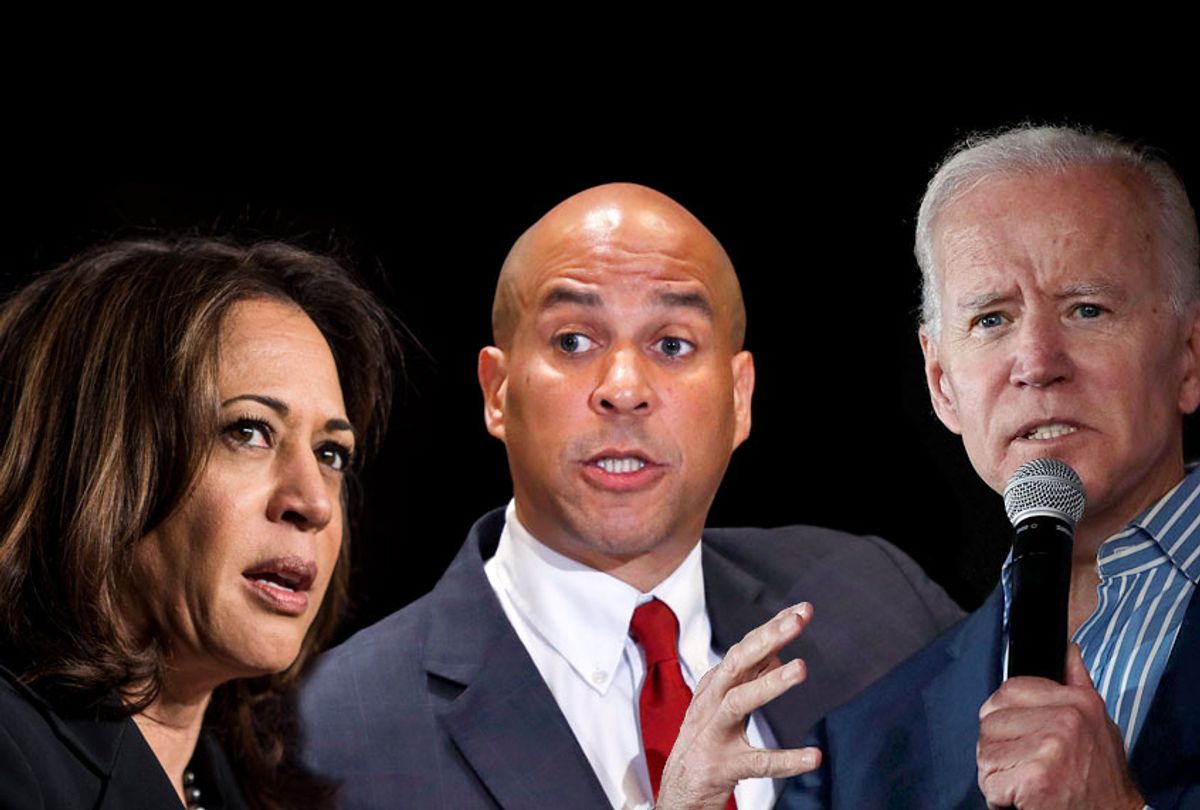 Joe Biden dismissed calls to apologize after citing his memories of working alongside fervent segregationist senators in the 1970s as he stressed the importance of "civility" in Congress, which he claims has all but disappeared.

The former vice president struck a confrontational tone Wednesday night when asked about his comments, which have faced mounting criticism from his rivals for the 2020 Democratic presidential nomination and prompted renewed scrutiny of his record on race.

Asked by reporters outside a fundraiser in Maryland whether he should apologize, Biden asked, "Apologize for what?"

Biden has faced mounting backlash over remarks he made at a Tuesday fundraiser about the late Sens. James Eastland of Mississippi and Herman Talmadge of Georgia, two Democrats who were staunchly opposed to desegregation. The former vice president recalled the "civility" of the Senate in the'70s and '80s at a fundraiser, touting his experience working with Eastland and Talmadge.

"I was in a caucus with James O. Eastland," the former vice president said. "He never called me 'boy,' he always called me 'son.'"

Biden said Talmadge was "one of the meanest guys I ever knew," but he was still able to work with him.

Eastland, in addition to his opposition to racial integration, ridiculed black soldiers during World War II and claimed the 1964 murder of three civil rights workers in Mississippi was a "publicity stunt." He was "best known nationally as a symbol of Southern resistance to racial desegregation" and described black people as belonging to an "inferior race," according to his obituary in the New York Times.

Talmadge once declared that "God advocates segregation" and boycotted the Democratic National Convention, along with a dozen other southern senators, after former President Lyndon Johnson signed the Civil Rights Act of 1964.

Biden's comments drew backlash from his Democratic rivals, including Sens. Cory Booker of New Jersey and Kamala Harris of California, who are candidates of color, and New York Mayor Bill de Blasio, whose wife is black and children are biracial.

"You don't joke about calling black men 'boys,'" Booker said in a statement. "Men like James O. Eastland used words like that and the racist policies that accompanied them to perpetuate white supremacy and strip black Americans of our very humanity."

"I have to tell Vice President Biden, as someone I respect, that he is wrong for using his relationships with Eastland and Talmadge as examples of how to bring our country together," Booker added. "And, frankly, I'm disappointed that he hasn't issued an immediate apology for the pain his words are dredging up for many Americans."

Harris, who made history when she became the first Indian American to hold office in the U.S. Senate and the first black senator from the western state of California, told reporters Wednesday that while she has a "great deal of respect" for Biden, his remarks were both "misinformed" and "wrong."

"He has served our country in a very noble way," Harris said. "But to coddle the reputations of segregationists ⁠— of people, who if they had their way, I would literally not be standing here as a member of the United States Senate ⁠— is⁠ — I think, it's just misinformed, and it's wrong."

De Blasio sharply criticized Biden's remarks in a tweet, writing, "Eastland thought my multiracial family should be illegal & that whites were entitled to 'the pursuit of dead n**gers.'" He shared a picture of his interracial family and added, "It's time for apologies or evolution from @JoeBiden. He repeatedly demonstrates that he is out of step with the values of the modern Democratic Party."

Sanders noted that Biden's comments were particularly damaging "at a time when the Trump administration is trying to divide us up with its racist appeals."

Biden stressed on Wednesday night that he intended to make the point that "you don't have to agree" in order to pass major legislation.

"Here's the deal. I could not have disagreed with them more. I ran for the United States Senate, because I disagreed with the views of the segregationists," he said, adding that many of them were in the Senate when he first joined the upper chamber.

He added that despite those major differences, the Senate was able to sign legislation extending to the Voting Rights Act of 1965.

"You don't have to like the people in terms of their views," Biden said. "But you just simply make the case, and you beat them. You beat them without changing the system."

Biden also referenced Booker's call for him to apologize for his remarks, saying, "He knows better. There's not a racist bone in my body. I've been involved in civil rights my whole career. Period. Period. Period."

Booker later went on CNN to respond to Biden, claiming that the former vice president's insensitivity to racial issues was not well suited for a presidential nominee.

"I know that somebody running for president of the United States ⁠— somebody running to be the leader of our party ⁠— should know that using the word 'boy' in the way he did can cause hurt and pain," Booker said. "At a time when we have from the highest offices in the land, a divisiveness, a racial hatred and bigotry being spewed, he should have the sensitivity to know that, 'This is a time I need to be an ally and I need to be a healer. I will not engage in the usage of words that will be harmful.'"

Biden's campaign has pushed back fiercely against the barrage of criticism he has received from 2020 presidential candidates.

"@JoeBiden did not praise a segregationist. That is a disingenuous take. He basically said sometimes in Congress, one has to work with terrible or down right racist folks to get things done. And then went on to say when you can't work with them, work around them," tweeted Symone Sanders, a senior adviser for the Biden campaign and prominent black political strategist.