Smart Watch: Not all reality TV is trash! These unscripted shows are actually useful

Sure, most reality and unscripted series are hot garbage. But there are a few that can actually make life better 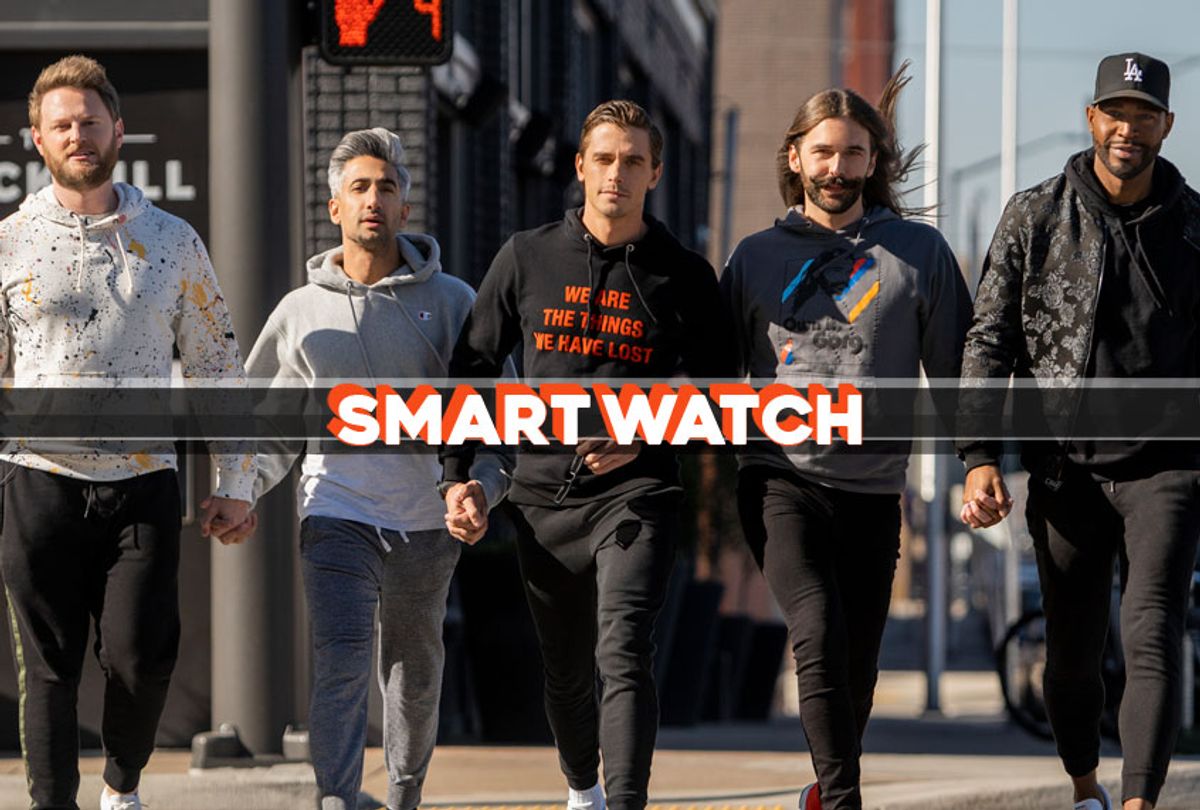 The phrases “reality TV” or “unscripted reality” or whatever you want to call television that doesn’t have an official writers room, even though much of it is scripted, is often associated with the word “garbage.” That’s a bit unfair. Unscripted television might not represent the total decline and fall of civilization but, at the very least, much of it provides compelling evidence that we may be collectively tumbling into a depression.

That said, summertime’s arrival means an inordinate amount of primetime real estate is now dominated by shows like “The Bachelorette” or “Big Brother” or “Love Island” or “Infidelity Boat” or “Phallus Battle" or “Crotch Wars.” (Can you even spot the fakes?)

Then again, to those who would automatically tune out the unscripted genre I have two words: “Tidying Up.” Improvement series are part of the unscripted genre too, you know. And after Americans met decluttering expert Marie Kondo via her Netflix hit, thrift stores around the country were flooded with so many hand-me-downs they couldn’t handle it.

Point being, no genre of entertainment is completely without value. But with so much TV to navigate, finding the gems can be difficult. So here are a few life-improvement series that might prod you to make a few seasonal shifts, including at least one that’s gone but not forgotten.

By now you're well aware of how life-changing this series is, right? That's old news.  In case you haven't heard, Netflix's update of Bravo’s “Queer Eye for the Straight Guy” expands its mission to include everyone — men, women, nonbinary, you name it. Food and wine expert Antoni Porowski, interior design master Bobby Berk, grooming diva Jonathan Van Ness, fashion maven Tan France and culture cheerleader Karamo Brown drop into a lucky nominee’s life and transform the person’s surroundings, wardrobe and general mental outlook over the course of about a week. It’s the ultimate mood enhancer.

Why it has value: What, besides reminding the viewer that humans are basically good, flawed people who need a little dusting off and encouragement? It’s simple: “Queer Eye” inserts very light, gentle reminders of the little thing we can do to live better.

Even acts as simple as putting product into our hair can have meaning and worth. Or of you don’t want to get all woo-woo about it, it can teach you how easy it is to properly cook a steak or make an elegant drink. We can all use that knowledge.

Part creative showcase, part how-to, and part marketing lesson, Lara Spencer’s upcycling game show is fascinating and addictive. No wonder this channel marathons the heck out of it on weekends. The gist is that two couples get an hour to find items at a flea market that they can then deconstruct and craft into new pieces that satisfy three thematic categories determined by Spencer and her producers. Examples include an ombre challenge, Hollywood regency, or something nebulous like “drab to fab.”

Contestants get a day in the show’s workshop and assistance from master metalworkers, carpenters and general fixers to transform their pieces, with the goal of selling them on at one of New York City’s finer flea markets. The team that makes the most profit wins.

Why it has value: Warmer weather and sunshine often leads to seasonal cleaning and the urge to purge, which translates to garage sales and free item piles popping up. Now, while there are some items that are best left on that curb, anyone who has ever needed to furnish an apartment on a budget knows what gifts abandoned shelving, side tables and other items can be.

This series inspires creative curbside claimers and dumpster divers to unleash their imaginations and artistry, and not be limited by the definition of an item’s original purpose. On this show people transform apple crates into coffee tables, windows into side tables and just about anything you can think of into bars.

Watch enough episodes and you’ll also get ideas on how to negotiate the best deals without insulting flea market merchants, not to mention learning a thing or two about the psychology of sales. And we cannot stress this enough: everybody loves a bar.

You may sense a theme here — interior décor series tend to be some of the best sources of inspiration on television. This one slipped into the Netflix stream a year ago, but it’s one of those series that’s great to discover whenever you happen to find it. Each episode visits three different homes in cities around the world occupied by residents of varying financial means. The only thing they have in common is that the outside of their places look ordinary.

Open the doors, and you might be welcoming into a life-sized Barbie palace; a house in which every room is themed to evoke a fairy tale or a holiday, or a horror house. There’s a guy who transformed his garage into a futuristic showcase for his high-end sports car and a wine collection. And there’s the couple who bought a rusted-out boat and through sheer determination and their own elbow grease, carved it into a super-mod chill pad.

Why it has value: Summer tends to be the season when people bite the bullet and finally get to re-painting their sad, boring rooms. But most of us tend to think small in this department. Why?

Watching this series could make you re-think settling for off-white, or beige, or greige, or slapping up some Ikea artwork on the walls in the name of refreshing your surroundings. Your home is yours to mold to your comfort and thrill.

There is absolutely no excuse for settling for middle-of-the-road, inoffensive color schemes in your living space, where the only person you need to please is you.

Or maybe you’re too tired to take years to transform your place into a portal to another dimension. We get it. At the very least, this show challenges people to think more expansively.

“Diners, Drive-Ins and Dives,” airs Fridays at 9 on Food Network.

Confession: I do not enjoy Guy Fieri. I do not fantasize about spending any time in his presence. I just can’t. However, Salon’s editor in chief Erin Keane agrees with his recommendations when it comes to finding a good breakfast place in a strange town. A self-described “Enneagram 7 with a trash-panda appetite,” she’s road-tested a few of his selections on vacation and swears his opinions are legit.  I looked up his eateries of choice in my hometown and what can I say, I agree with his endorsements.

Why it has value: Not every great hole in the wall is going to be discovered by Eater. Yelp isn’t entirely reliable. And without Fieri, these places probably wouldn’t make the pages of a Zagat’s. Or maybe they would. At any rate, if Fieri’s done the work for you, why quibble? Drive up, sit down and eat.

There’s no question that the British do home improvement and culinary television better than most. We have them to thank for “Trading Spaces” and “The Great British Baking Show.” But this series, which aired between 1997 and 2005, is one of those incomparable all-time greats of the gardening series that aired in the U.S. on BBC America.

For a brief period Alan Titchmarsh, Charlie Dimmock and Tommy Walsh were celebrities stateside and the U.K. due to their non-nonsense and highly attainable approach to whipping landscapes into shape and lowering inhibitions when it comes to adding some greenery to living spaces.

Why it (still) has value: While it’s true that the British are generally more passionate about gardening than Americans — we are lawn folk — “Ground Force” invites the viewer to think strategically about their outdoor spaces. Titchmarsh and his team propose ambitious hardscaping but were rarely precious about their projects, and they didn’t undersell the amount of elbow grease that goes into creating a great outdoor space, even in less-than-ideal conditions. Better still, it reminded viewers, and still reminds us, of how important is for us to live outdoors as well as beautify our home interiors.

Everybody has their favorite cooking series, most of them inspired by “Iron Chef” or some version of Gordon Ramsey’s competitive scream-a-thons. And while a call for suggestions on Twitter netted some endorsements for “Chopped,” a fine series that pushes culinary experimenters to try unusual ingredient combinations, Alton Brown’s classic show remains one of the most accessible ways to connect to the joy and science of cooking. Not only does he walk viewers through creating dishes, he explains why chefs use certain techniques, thereby making the home cook better.

In this series Brown revisits classic episodes and updates his methods, recipes and techniques. In some cases he re-does them completely.

Why it has value:  Not only does he walk viewers through creating dishes, he explains why chefs use certain techniques, thereby making the home cook more educated and confident about their efforts. Regardless of a chef’s experience, this series has some knowledge to drop on you. Listen to what Brown says, and dig in.