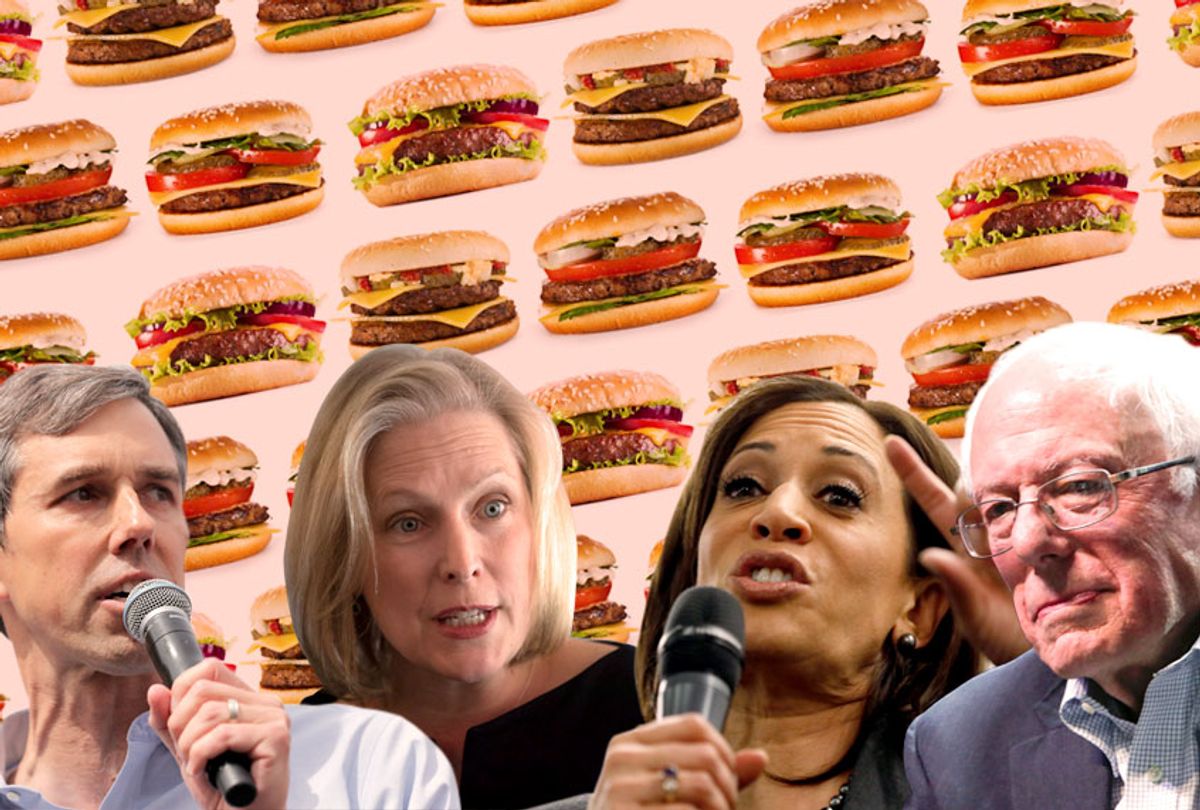 The New York Times has posted a series of short videos of the Democratic candidates for president answering important questions, like what they propose to do about our broken health care system and just how crooked Donald Trump is. Because campaign coverage demands candidates be allowed “human” (debatable!) moments, the Times also asked the participating candidates about their go-to comfort foods on the campaign trail.

After having to watch several times to catch which random white guy said the words “ice cream” in the saddest tone those words have ever been uttered, I have some questions. As an Enneagram 7 with a trash-panda appetite I feel qualified to say that only a few of our Democratic stars seem to understand the concept of comfort food at all, which is troubling given the more difficult material on the table during this coming election, like Russian troll farms and impeachment. (A handful don’t appear to understand the concept of food, period.)

Perhaps the more reticent are worried of sounding too much like Donald Trump if they admit to their guilty pleasures, but there’s a lot of ground between “just a salad for me, thanks!” and wiping your Big Mac-sauced fingers on the Constitution while texting desperate bitmoji to whoever has Hope Hicks’ old number now.

Comfort food isn’t just sustenance, it’s a flavor-rich soothing mechanism that somehow, through an individualized emotional alchemy we can attempt to describe but may never fully articulate, reassures the eater that for a brief moment all is right and good in the universe, as I'm sure Kirsten Gillibrand's Ranch Girl could explain.

Some candidates open up with their answers, while others deflect, dodge and disappoint. What did we learn about the candidates through their food choices? Nothing meaningful, and also everything that counts.

(Note: We can only comment on the candidates in the video. In the absence of a Joe Biden appearance let’s just assume his answer would be “your mom.”)

The New York Times asks the candidates: What is your go-to comfort food on the campaign trail?

Cory Booker is vegan, did you know? Has he told you? Of course he has. Booker tells the Times that being vegan on the campaign trail “means veggies on the go,” as if curly fries are just a figment of one of my better dreams. I assume he's shooting for "not gross like Trump" and "definitely no heart disease!" but there's no way around it, the word “veggies” sounds pathologically infantile coming from a grown man's mouth. Rosario, do something.

Tulsi Gabbard is vegetarian, which means cheese pizza should absolutely be an option. And yet her unconventional childhood, which DEFINITELY WAS NOT A CULT, means she may not have grown up eating nominally vegetarian trash like strawberry Pop Tarts with frosting and sprinkles. “I try to stay away from it,” she tells the Times, with preternatural poise and a smile that won’t break, “but vegan cupcakes is probably a real threat on the trail.” Well, something has to be.

Beto O’Rourke, despite his painfully well-documented Whataburger love, can't bring himself to get specific now that he's trying to take his "guy you didn't not date in college" appeal past Texas. “Any kind of fast food,” he claims, a dodge if there ever was one. Nobody wants "any kind" of fast food. Fast food is the most specific of comfort foods, intrinsically tied to your early-20s hangover cures or the skateboarding stomping grounds of your Senate campaign, whatever. This is Beto trying to act like he's definitely not the guy who corners you at the bar to deliver an impromptu lecture on which micro-region of hops makes the best IPAs and I don't trust it. Obviously he should have cited an item from the Whataburger secret menu instead. Secret menus are the Burning Airlines catalogs of comfort food.

Steve Bullock: "Burger." Who are you?

John Delaney: "A grilled chicken sandwich from McDonald's with no sauce. Two of them." As metaphors go, this one's extra painful. A vote for John Delaney is a vote for dry chicken, and more of it than you ever wanted.

Amy Klobuchar wants you to forget she ever ate a salad, let alone The Comb Salad, the one she famously ate after berating the staffer who forgot her fork. "A baked potato," she says with the pained smile of a person who desperately wants her answer to be of no consequence, though now all I can think about is the shiny arc of a foil-wrapped fast-pitch sailing just over a ducking aide's head.

Bill DeBlasio says if he has one go-to, it's pulled pork. This is actually a shrewd political answer — pulled pork is a foundation of Southern barbecue, which crosses racial and urban/rural divides, but it also suggests a love of carnitas and Chinese shredded pork dishes. You're not going to win on pulled pork alone, but it won't cost you the race either.

Michael Bennet shows some specific love for "the Italian sausage sandwich at Pass Key in Pueblo, Colorado." This is a guy who knows how to eat and knows his own limitations, both of which I respect. He obviously recognizes this presidential campaign is folly, that he's a Who? in the field, and that he will definitely have to run for Senate reelection in Colorado if he wants to stay in politics. Well played, Michael Bennet.

Andrew Yang: "KIND bars are my comfort food." Did he just emerge from 10 years in a subterranean survivalist bunker? KIND bars are a "this meeting is definitely not ending soon" item you scrounge, flattened and slightly melty, from the bottom of a messenger bag. "KIND bars" is what you say when you don't want to be known as the weirdo who said "Soylent" but damn it, you kinda made it worse.

John Hickenlooper gets fetishy about "those little bowls of M&Ms or mints" and Jay Inslee makes a dad joke about M&Ms and getting fat and maybe I got that backwards but you don't care, do you?

Marianne Williamson, definitely not a robot: "I have no comfort food." Even GOOP won't endorse that.

Pete Buttigieg: Apparently "the word got out that I like beef jerky" so fans have been gifting Mayor Pete . . .  beef jerky, which . . . OK so at my favorite bar there's a guy named Rusty who comes around wearing overalls and a cute hat selling his homemade beef jerky from a basket, and he appears like magic around 2 a.m., just when you're in the mood to maybe buy some cured meat off a laconic stranger, and it's the most wholesome thing ever but also kind of disquieting, and if he ever left us we would feel utterly adrift. What I'm saying is if any local eccentric can run for president now, damn it, I want Rusty on the ballot.

Julián Castro:  "I don't have a comfort food," Castro declares. Bold move! He follows with, "I have a comfort drink" — and here he takes just a tiny impish beat — "and it's ice tea." I cannot take this seriously. Not to be outdone on the comfort caffeine front, Eric Swalwell insists, "It's really comfort coffee. My favorite coffee is  . . . [and here we see him visibly wince, like he can tell this is a weenie thing to say even as he's saying it] . . . mocha?"

Kirsten Gillibrand has something to say about comfort drinks. With nothing left to lose and looking like she wants to say this after a long drag on a Malibu 120, she declares, "Glass of whiskey at the end of the night." Kiki, if you're on the verge of giving up, I'll meet you at the bar.

Elizabeth Warren doesn't want anything fancy, understand. Just "chips and guacamole," the Golden Retriever of comfort foods. A legit choice, solid even, a decision that comes straight from the heart after considering years of research and maybe just a little overthinking about the ideal flavor combinations of salt, fat and crunch.

Closing out the round is Kamala Harris, who is not messing around, of course, with her answer to the comfort food question as with everything. She states unequivocally that she loves "a good french fry, or a few, or many, just the whole thing."

Based on these late-night menus, if I'm crashing anyone's campaign bus afterparty it'll be Kamala's and Liz's. That doesn't mean this exercise in humanizing the candidates moved anyone's dial, of course; the fact that many Americans love whiskey like Gillibrand does, or that many consider themselves an "ice cream guy" like whatshisname, ultimately means nothing. My advice for 2020? Don't look for our next president to save us, or turn back the clock to a less chaotic or dangerous time. But do considering finding a significant other who looks at you the way Kamala Harris looks off into the distance, dreaming of the large order of fries awaiting her at the end of a long day of answering questions like this.