Escaping the Hickenlooper paradox: Can at least half the 2020 Democrats please quit right now?

Eric Swalwell: Who are you again? Bill de Blasio: WTF? The overcrowded 2020 field isn't funny. It's a disaster 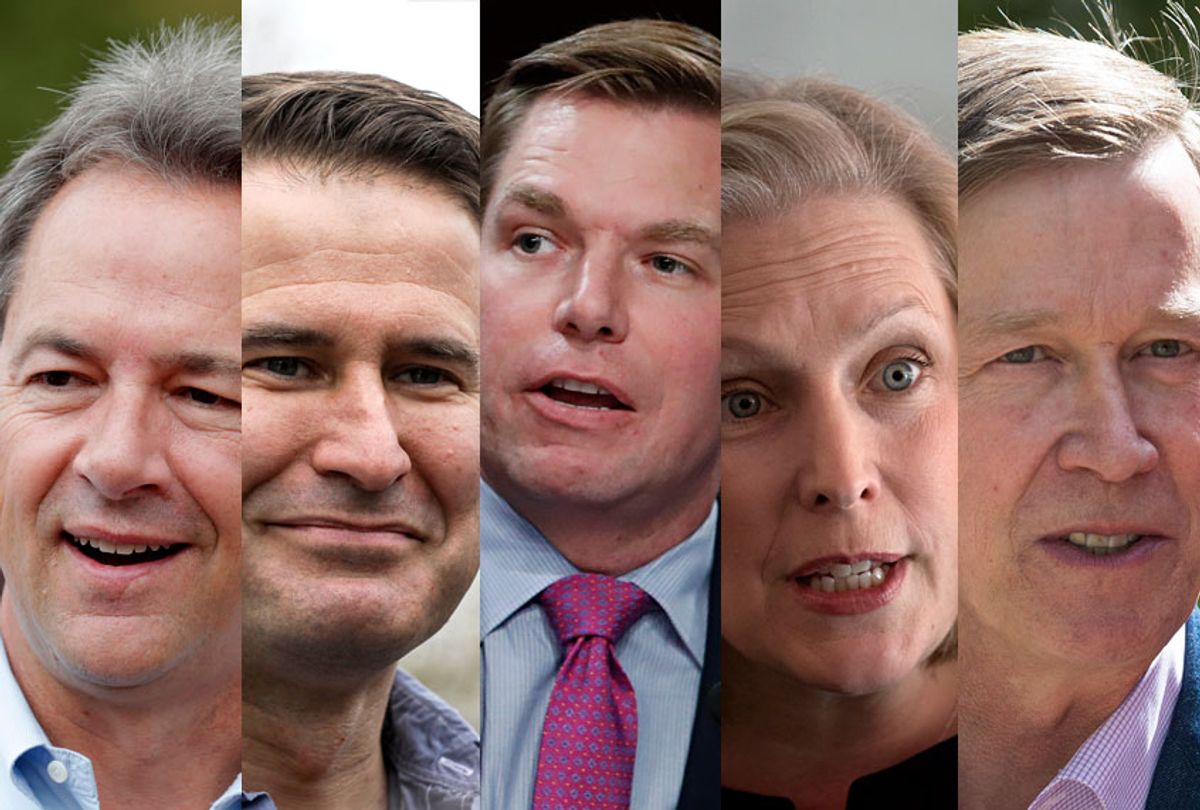 OK, Democrats — you’ve had your fun. You grew up being told that everybody could run for president, and then everybody did. Except that this mad anthill scramble of presidential candidates, which resembles a bunch of kindergarteners descending on not enough cookies, really hasn’t been fun so far. All you’ve managed to do is put the fear of God — or the fear of the other guy, really — into the voters, provoking widespread PTSD flashbacks to November 2016.

We’re now less than two weeks away from the first debate of the 2020 Democratic campaign, and everybody and his freakin’ uncle is running for president. (In fact, everybody’s freakin’ uncle, he of the squeezy hands, minty breath and bottled conventional wisdom about the “middle class” and what it wants, is the notional frontrunner.) This is stupid. It makes our country look stupid. (Which isn’t hard.) It makes the political party that presents the only realistic opposition to the ignorant, corrupt, would-be fascist tyrant in the White House look dysfunctional, weak and stupid. (Ditto.)  It’s time for half of them, or most of them, to bail out.

We know who the Democratic nominee will be. Well, no, we don’t. We know it will either be Joe Biden or one of a modest handful of people hypothetically positioned to become the anti-Biden. Those people are all senators with two-syllable names, with a sort of asterisk for the 12-year-old mayor of River City. Those people can all stay, along with a few others who have a minuscule but still measurable chance or are pretty much running for vice president. (Here’s looking at you, Amy Klobuchar!) And, sure, we can have a couple of marginal candidates who serve a purpose: Jay Inslee is the climate guy; Tulsi Gabbard (even if you hate her) has nudged the debate on endless war and America’s obscure but terrible foreign policy (i.e., endless war) fractionally to the left; Mike Gravel, or rather “Mike Gravel,” has been delightful in every way.

But everybody else? Dude, it’s over. Hang it up. Go back to your day jobs. Or, in the case of the horde of semi-retired Mountain West Democrats in this race, go back to settin’ all day at the fly-tyin’ bench and not gettin’ a durn thing done. (I know whereof I speak: I may be a member of the “coastal elite” now, but I spent a lot of time growing up in a gold-mining town so small and so overrun by Mormons that my parents and one other old-line family were known, collectively, as “the Democrats.”)

The real danger here is, of course, not that funny. As mentioned above, Donald Trump is the president. He is a fascist, if not a highly skilled one, and although he has no clear idea of how to destroy (the rest of) democracy and appoint himself dictator, there are many people who love him who are trying to help. Trump himself is both central and accidental. He is basically a baboon set loose with a box of matches inside the great library of Alexandria. He has no idea what he’s doing, but he’s a quick learner given his limited intellect, and sooner or later he’s going to figure out how to light the damn things. Then — whoosh! No more civilization! But I’m sure we’ll treasure the memory of all those tweets about who is most likable or most electable, and all the infighting between BernieBros and Warren-stans about who is the bigger racist and most massive corporate sellout.

That dumb “electability” question has no clear or obvious answer, by the way — which is exactly why so many of these semi-adorable nerds are running for president. Democrats cannot agree on how to beat Donald Trump, what sort of candidate (and what sorts of voters) provide the best chance of beating Donald Trump, and whether — this one’s the biggie — beating Donald Trump is enough, all by itself, to stem the tide of the movement or moment on top of which he rides.

I believe it isn’t. I think most people on the self-described left believe it isn’t. I believe that Donald Trump is essentially a fluke, and was canny enough to channel a current he did not create and cannot control. But plenty of other people are, like, Give us a break with the history lesson, Poindexter! That guy is a really shitty president! He! Has got! To go! Which, you’d have to say, is a reasonable argument.

So even though the leftward half of the media class has fallen hard for the theory that Elizabeth Warren’s folksy restructuring plan is the best shot at beating Trump and saving America, and Bernie Sanders’ “political revolution” retains a campus cult following akin to the one once enjoyed by Jerry Garcia, and partisans of Kamala Harris and Pete Buttigieg have their own well- or poorly-wrought arguments to offer, and Beto O’Rourke has actually started running a decent campaign after many weeks of dunking on himself, nobody actually has the slightest fragment of a clue.

The cases for all those people may sound less inane than the argument that African-Americans will vote for Joe Biden because he’s black-adjacent while, on the other hand, at least a few regretful-but-still-racist Trump voters will vote for him because he’s a white guy — and that if you can drive Trump out of office with an overwhelming defeat, even to the human equivalent of a Barcalounger, the underlying fever may break. But actually, that sounded less stupid as it went along, right? And the thing is, nothing like this year’s keg-party-size field of candidates has ever happened before, just as nothing like the Trump presidency has ever happened before. Nobody knows anything.

Would you like me to keep going? I would not. Those are only four of the 23 (or so) announced Democratic candidates, who include several you have heard of and a bunch more you have not. I haven’t even gotten to my wisecracks about Sen. Michael Bennet of Colorado (only one “t,” confusingly) or former Gov. John Hickenlooper, also of Colorado, who has a funny name that renders all jokes unnecessary, or Sen. Kirsten Gillibrand, who is not from Colorado and whose fate is arguably cruel. Pathetic! But also cruel.

None of this resembles the operations of a serious political party. Or maybe, in a backward, nefarious way, it does. If there’s a valid conspiracy theory to be had about the supposedly all-powerful Democratic National Committee this time around, it might be that the 2016 race has been inverted but will arrive at the same result. Last time there were essentially no challengers to the favored party insider, except for that one crazy old guy nobody took seriously. The law of unintended consequences kicked in with extra guac on that occasion, so this time, perhaps, the strategy is different: Flood the zone with a deeply confusing and largely indistinguishable array of candidates, allowing the most familiar face to coast to victory. It’s working, right?

It might not be working. And anyway, I do not actually believe that: It’s never prudent to perceive the operations of a sinister plot when incompetence and bewilderment can adequately explain the same thing, and this goes double when you’re talking about the Democratic Party. Still there is a sort of karmic payback at work here, even if it’s unintentional. Bernie Sanders’ supporters invaded the party infrastructure after 2016 and succeeded in changing the nominating rules to some degree. They limited the power of superdelegates and, perhaps more important, created an environment where big-money donors and “bundlers” and fundraisers in Aspen and Los Altos Hills and Manhattan south of 96th Street were seen as undesirable.

Now the party bigwigs, such as they are, can point to the ensuing chaos and ask, maliciously: Is this what you wanted? Random mayors and congressmen and Andrew Yangs shilling for small-dollar donations on the internet with not-too-slick videos showcasing their inspiring life stories, overly detailed policy proposals, gawky spouses, service in Afghanistan and technical command of the Chopin piano études?

I mean, that ludicrous rule stating that a candidate could qualify for the debates by wrangling 65,000 individual donations of any size? Who came up with that? Did the DNC actually hire Corey Lewandowski (who assured them he wasn’t that Corey Lewandowski) to come up with the dopiest, most distracting mechanism possible and start everyone down the road of thinking, well, I guess four more years of this idiot won’t actually change my life that much? Because that’s how it seems.

No, the 20-person field for the two nights of debates in Miami later this month won’t solve anything. (Visiting Miami in the summer is its own form of punishment, generally reserved for lobster-complected European tourists. But I digress.) The idea that that depressing spectacle will allow Warren or Harris or Mayor Pete or whomever to surge is shockingly naive. Did anyone who is fantasizing about that watch any of the 2016 Republican debates? In case you’ve forgotten, the clear winner was the carnival-barker dude who made up insulting nicknames for everybody else, and for better or worse Democrats don’t roll like that.

To coin a phrase: It is time for them to go. Gov. Steve Bullock of Montana, Rep. Seth Moulton of Massachusetts and Mayor Wayne Messam of whatever alligator-infested suburb didn’t make the debates, and are already off the island. Of the list I mentioned above, I’ll extend a short-term mulligan to Marianne Williamson, because every Democratic race needs a New Age nutbar. Andrew Yang gets to stay around long enough to collect his parting gift too, even if the “millennial Ross Perot” act holds approximately the appeal, to me, of gum surgery performed by a dentist who’s just not that into anesthesia.

But the rest of you down there in the Gillibrand-Hickenlooper vortex, a swirling mass from which no light or energy can escape? Get thee gone. Gillibrand will have to carry the Al Franken thing to her grave; I don’t claim that’s fair. Hickenlooper has found out that the “white guy pissing on socialism” lane is already clogged up with Joe-mentum. Bennet, Ryan, Swalwell, de Blasio — whatever your exercise in pointless vanity was meant to prove, your toast is blackened and getting cold. I won’t say “nice try,” because it’s not true. Enough already.

Even the claim that Klobuchar and Cory Booker are “potentially viable” and “contributing something” is being way too Democratic Party-nice at this point. They’re locked in a tight race to become the Scott Walker of this campaign — the laboratory-grown perfect nominee who actively repels voters. Beto is on thin ice, and had better get into that race against Sen. John Cornyn in Texas while he still can. Does anyone, including their moms, spouses and campaign managers, believe that any of those people will be the next president?

If we eliminate all those obvious losers by Labor Day, we’re down to a field of about a dozen: Five or six semi-serious contenders and another half-dozen weirdos with distinctive messages. Is that almost normal? Yes. Is it enough to make it seem like this is a political party that wants to take power, and wield it competently enough to address an unprecedented national and global catastrophe. Not really. In fact, not even close. But you have to start somewhere.